LINN Energy (OTC:LINEQ) and LinnCo (NASDAQ: LNCO) are scheduled to report first-quarter results before the market opens on Thursday. Investors shouldn't anticipate much out of the ordinary this quarter, as LINN is still digesting the LinnCo-led acquisition of Berry Petroleum. Instead, investors should expect the company's numbers to be roughly in line with its previous guidance.  We'll hopefully also get some answers on how LINN plans to grow.

The numbers that matter

LINN's guidance for the first quarter projects production to average between 1,070 and 1,100 MMcfe/d. Anything below that would be a big disappointment for investors, especially considering the full-year guidance range calls for little growth -- just 1,070-1,140 MMcfe/d.

Assuming LINN's production stays within its guidance range, the company should produce enough cash flow to cover its distribution. The current plan calls for the company to basically distribute 100% of its available income in the first quarter, while paying out all but roughly $12 million of its total available distributable cash flow for the full year. That doesn't leave much room for error, which is one reason investors have been selling off its stock this year.

This guidance is based on the status quo for LINN's asset base. However, if the past is any indication, LINN's asset base isn't likely to stay stagnant in 2014. Instead, as the following slide shows, LINN is likely to make a growth-driving acquisition or two before the end of the year. 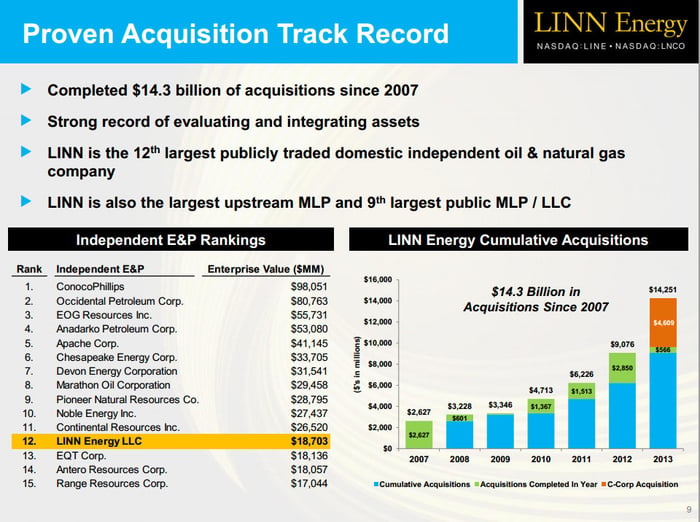 Diamondback results
That said, LINN Energy might not make an acquisition announcement this quarter. But it should have another important announcement for investors. Last quarter, LINN Energy said it was participating in a nonoperated horizontal Wolfamp well in the Permian Basin with partner Diamondback Energy (NASDAQ:FANG). LINN should have the results from that well this quarter.

This is LINN's first well in what could be an important area for the company. Success here could help shape the company's decision regarding management of its large Midland Basin acreage position.

Updates on the Midland alternatives
Peers such as Diamondback Energy have been particularly aggressive in locking up acreage in the Midland Basin section of the Permian. It recently spent $288.3 million to acquire 4,683 acres in the play. That's a lot of money for such a concentrated position, which shows just how promising Diamondback thinks these acres will be, and it suggests LINN Energy is sitting on a gold mine.

LINN has the opportunity to explore strategic alternatives for its 55,000 net acres in the Midland Basin that are prospective for these horizontal shale intervals. LINN here has a number of alternatives that it can consider, including holding on to the acres and drilling the wells itself.

However, because it has so many options, it's unlikely that LINN will announce its final plans this quarter. However, the company might hint that it is nearing a decision as to what direction it plans on heading. The current plan is to drill 10 operated horizontal wells targeting just the Wolfamp B interval beginning next quarter. Any hint that those drilling plans have changed could suggest that LINN plans to cash in on this asset in order to produce assets elsewhere.

Investor takeaway
Investors shouldn't expect too much out of LINN Energy this quarter. However, there's nothing wrong with a boring quarter from LINN, as investors have dealt with enough excitement over the past year. The whole idea behind the LINN Energy story was to allow investors to sit back, relax, and collect a growing oil and gas-fueled income stream.