China has an aircraft carrier -- and it's making the neighbors nervous.

Across Southeast Asia today, plans are afoot from Taiwan to South Korea, and from Australia to the Philippines to Japan, to boost military spending to counterbalance an increasingly bellicose Chinese navy. Now, it seems that one of these countries, Japan, is ready to step to the fore and lead an alliance.

How did it come to this, and what does it all mean to investors? 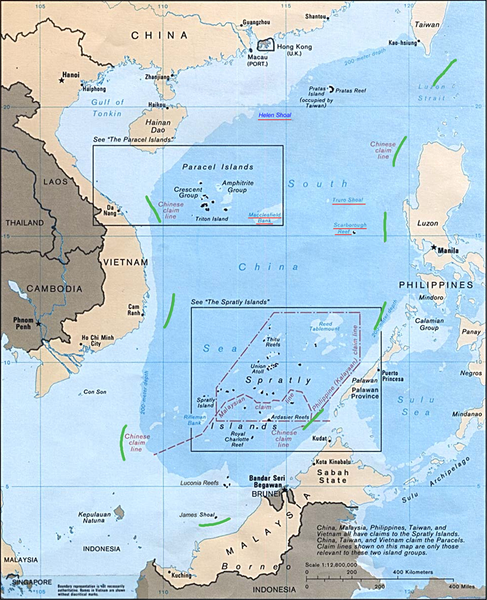 The background
For the past few weeks, a mixed fleet of Chinese warships and commercial fishing vessels have been skirmishing with local Vietnamese boats in the South China Sea, battling for position around an oil rig that CNOOC (OTC:CEO) has set up within Vietnam's exclusive economic zone. Last week, this dispute escalated when a Chinese vessel rammed, and sank, a Vietnamese fishing boat. (The sailors were rescued by other Vietnamese fishing boats nearby, but the incident escalated hostilities nonetheless.)

Not far away, off the coast of the Philippines, Chinese warships are threatening civilian fishing boats, and blockading a Filipino outpost on a local reef, refusing Philippines' ships access to resupply their troops. And to the north, tempers continue to flare over China's unilateral declaration of an "air defense identification zone" encompassing most of the East China Sea -- including territory claimed by South Korea and Japan.

As stories like these proliferate, naval analysts at AMI International predict that nations neighboring China will invest some $200 billion in buying over 1,000 new submarines, small surface combatants, and aircraft carriers to beef up their militaries over the next 20 years -- making the region the world's second-biggest market for military warships, after the United States. There's even talk of seeing these nations band together to "contain" Chinese influence.

And Japan wants to lead in this effort.

Rising sun
Last month, Japanese Prime Minister Shinzo Abe called for a "reinterpretation" of Article 9 of Japan's post-WWII Constitution. This article contains Japan's famous renunciation of "the threat or use of force as means of settling international disputes." It's the one that -- read literally -- bans the country from even having a military consisting of "land, sea, and air forces, as well as other war potential." But it's also the one that poses the greatest obstacle to Japan's leading of a coalition of countries opposed to China's bullying in the region.

While stopping short of actually rewriting the constitution, Prime Minister Abe wants to read this article in the context of the United Nations Charter. Article 51 of the charter specifically permits countries to act in "individual or collective self-defence if an armed attack occurs against a Member of the United Nations." And Abe wants to claim that right for Japan, in spite of the wording of its own constitution.

What it means to investors
The Washington Post explains the import of this move: "By allowing for collective self-defense, Japan ... would be allowed, for instance, to help a U.S. vessel under attack on the high seas." Japan could similarly send its military forces to aid other allied nations under attack that request Japanese assistance. But two things are probably necessary to make this happen -- and herein lies the opportunity for investors.

First, and most obviously, if Japan wants to be able to aid its neighbors in distress, it needs a military capable of undertaking such missions. So while Japan's self-defense forces are already quite capable, the nation must take steps to make them even more so.

Last year, the Abe administration announced plans to invest $240 billion (not a typo -- that's nearly a quarter-trillion dollars in defense spending) to beef up its military. On the shopping list are P-8A maritime surveillance aircraft from Boeing (NYSE:BA), surveillance drones such as Northrop Grumman (NYSE:NOC) produces, and V-22 Osprey tilt-rotor aircraft from Textron (NYSE:TXT) -- tailor-made to operate off the decks of Japan's new fleet of helicopter destroyers.

What else it means to investors
More broadly, though, investors need to consider the potential follow-on effects from Japan's new engagement with its neighbors.

From a practical perspective, alliances work best when the members operate similar weapons systems. This aids both in cooperation on military exercises and, at an even more basic level, makes it easier for the weapons to "talk" to each other to prevent friendly fire incidents. This is why, for example, whenever the U.S. Defense Security Cooperation Agency goes to Congress seeking authorization to sell a weapons system to a NATO ally, it makes sure to point out the advantages of making the sale to ensure "U.S. and NATO interoperability."

Should Japan proceed with its reinterpretation of Article 9, and should its neighbors begin to rely upon Japan's assurances that it will aid in collective self-defense, the logical result would be that allied nations would begin to mirror weapons purchases that the Japan Self-Defense Force makes. Thus, once a U.S. defense contractor succeeds in getting its weapons system into the Japanese arsenal, it would win some measure of protection from competition (from competing, analogous weapons manufactured in Europe, Russia, or, of course, China itself) when bidding to sell the same weapons system to Japan's Asian-Pacific allies.

Result: The more bellicose China's actions in the South China Sea, the better the news for U.S. defense companies.