Even with closing the sale of its midstream assets, Eagle Rock Energy Partners (NASDAQ: EROC) still has work to do to turn around its struggling operations. Sure, the company vastly improved its balance sheet and simplified operations by becoming a pure-play upstream master limited partnership like LINN Energy ( LINEQ ). But if Eagle Rock really wants to be more like its peer and reward investors with a stable distribution, then it needs to follow in LINN's most recent footsteps and exit horizontal shale assets in Oklahoma.

The new Eagle Rock Energy Partners has two clear paths to growth. The sale of its midstream business gives it significant access to capital to pursue acquisitions, which are the lifeblood for growth at an upstream MLP. However, the company also has a very compelling organic growth opportunity thanks to its acreage position in Oklahoma. That position is detailed on the following slide from a recent investor presentation. 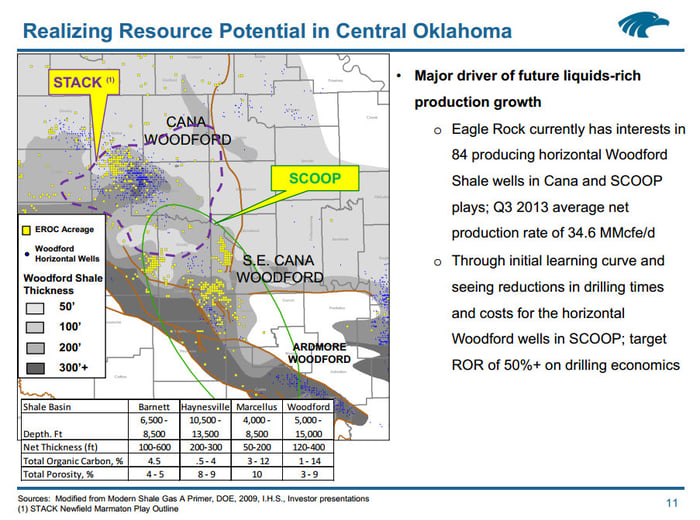 As noted on that slide, Eagle Rock has acreage in both the SCOOP and STACK plays that are drawing the attention of growth-focused drillers such as Continental Resources ( CLR -1.98% ) and Newfield Exploration ( NFX ). Due to the liquids-rich nature of their production these wells deliver rates of return in excess of 50%. The following slide notes that recent well results from Eagle Rock Energy Partners, as well as both Continental Resources and Newfield Exploration, have been strong. 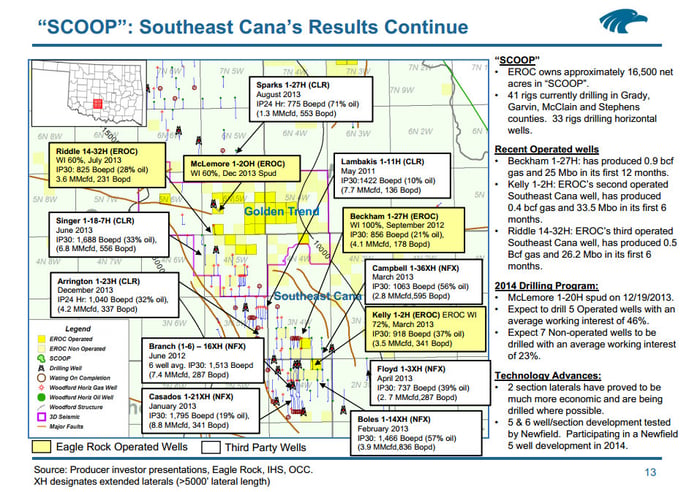 Many of the wells drilled in the region are delivering initial production rates of more than 1,000 barrels of oil equivalent per day, or BOE/d. However, there's just one problem with the initial output rate from horizontal shale wells: production declines very quickly. Newfield Exploration's type curve for SCOOP wells starts with initial production rates over 1,600 BOE/d; however, by the end of the first year these same wells are only producing 600 BOE/d. It's this steep decline curve that makes it hard for an income MLP like Eagle Rock Energy Partners and LINN Energy to produce the stable distribution investors are seeking. This is why LINN has traded away some of its horizontal assets in the Permian Basin and now plans to exit its horizontal assets in the Mid-Continent region.

Time to cash in and move on
Despite the decline rate, the SCOOP and STACK plays can move the needle for exploration and production companies such as Continental and Newfield. That's because these companies are reinvesting every penny in profits that comes in and drilling new wells in order to replace declining base production and fuel growth.

LINN Energy and Eagle Rock Energy Partners can't do the same, as the MLP tax structure forces both companies to send nearly all of the excess cash generated from oil and gas production back to investors. In addition, investors in MLPs are seeking steadily growing distributions, which limits the amount of capital these companies can spend on drilling new wells. As a rule, the best way for such companies to grow isn't through the drill bit but by acquiring low-decline properties from a company that is focused on growing through the drill bit. Because of this Eagle Rock should consider selling its horizontal position in Oklahoma and using that cash to acquire low-decline oil and gas properties elsewhere that could better support the company's distribution.

Investor takeaway
LINN Energy spent the past few years trying to increase production organically. It found out the hard way that the initial burst of production from horizontal wells declines too fast for it to keep up. Eagle Rock Energy Partners won't be able to fight this trend, either, which is why the company needs to follow in LINN's footsteps and cash in on its horizontal position while it's still hot.