Michael Nielsen
(MichaelPNielsen)
Author Bio
Michael is a full-time MBA student and certified stock market junkie. For the Fool, he writes articles about the telecom industry. To see some of his market-beating investment ideas, follow him on twitter Follow @BeatSP500

Google (NASDAQ:GOOG)(NASDAQ:GOOGL) Fiber... What an awesome concept. An Internet connection speed that is up to 100 times faster than today's average broadband.

What separates Google from its fiber competitors?
Let's think about the difference between Google and the big names in the telecom industry. First of all, Google is just entering the Internet service providing (ISP) industry: its first connection was made in 2011. That means the fiber optic cables that were laid down to connect Google Fiber to homes and businesses were on fresh soil untouched by Google.

In contrast, the big players in the ISP industry have huge networks of twisted copper wire sprawling across the country that connect their customers with broadband and DSL. So to build a network of fiber optic Internet, the seasoned ISPs will often drive in equipment, tear up streets, and lay down fresh fiber optic cables right next to their existing network of twisted copper wires.

Lack of ROI for the big ISP players
Obviously, tearing up neighborhoods to install thousands of miles of fiber is an expensive endeavor, an investment that many ISPs are not capable of funding. And in many cases, installing fiber could cannibalize their existing market share. Needless to say, the ROI of a fiber network would be slim to nil for most ISPs.

The ROI conundrum faced by normal ISP's is the reason Verizon shelved its FiOS expansion plans in 2010. And also why Verizon's CFO said "I am not going to build beyond the current LSAs that we have built out" at the Deutsche Bank Media, Internet and Telecom Conference this year.

Unlike Verizon, Google doesn't have a network of twisted copper wires. And Google doesn't have an existing stream of revenue from broadband or DSL. When Google lays down fiber, it doesn't have to worry about cannibalizing its own business. Each new connection results in new revenue -- a sound investment that will generate free cash flow it can use to organically expand its fiber network.

Why ISP investors should pay heed
Google has made some serious headway in the four years it has operated its Fiber service. Google Fiber is currently available in the Kansas City Metro Area, Austin, TX, and Provo, UT. And Google plans to expand its Fiber service to eight new metropolitan areas within the next few years. 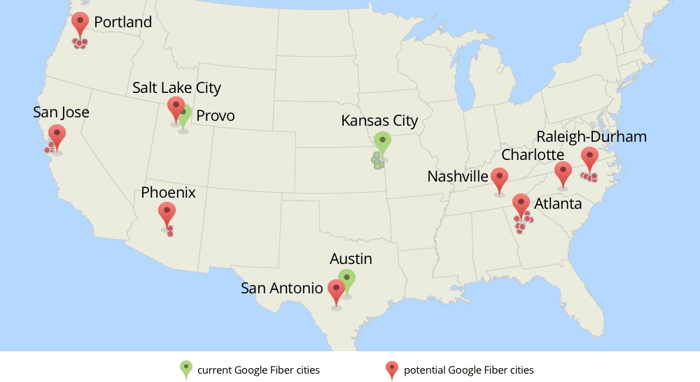 Goldman Sachs projects that Google Fiber could connect 830,000 homes per year and could reach nearly 8 million homes by 2022.

If ISPs aren't careful, Google could dominate the fiber market and take away their existing broadband and DSL subscribers.

Investors' takeaway
The bottom line is, if you're a Google investor, you should be pleased with the Fiber project. It has serious potential to create a large stream of revenue for Google and boost its advertising and merchandise sales. If you're a traditional ISP investor, you should pay attention to what Google does next. Google Fiber truly has the potential to change everything in the ISP market.