Solazyme has ambitious plans for its renewable oils platform, but it needs to bring initial capacity online before it can replace petroleum.

Could the world really replace petroleum with more sustainable oils and products? It's certainly plausible, but it would take decades of research, development, and production to capture meaningful market share from the massive petrochemical market. However long it takes -- years, decades, or centuries -- a lengthy timeline hasn't stopped renewable oils manufacturer Solazyme (TVIA) from trying to replace less sustainable petroleum and agricultural sources with a renewable platform powered by microalgae.

While the developmental stage company has navigated the public market fairly successfully to date, investors weren't thrilled with second quarter earnings last week and have sent shares over 10% lower. Mr. Market might be a little impatient, but the latest update from management lacked the big production breakthrough shareholders wanted to see this far into 2014. 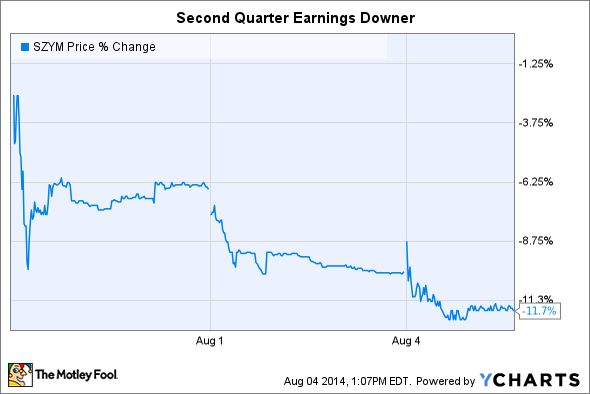 Let's face it: Solazyme won't blow investors away with top or bottom line growth until it reaches steady state operations (post-ramp) at its two production facilities in Clinton/Galva, Iowa and Moema, Brazil. The two sites would give the company 121,820 metric tons of annual production capacity (up from just 1,820 metric tons in 2013), validate its technology platform at commercial scale, and drive future expansion to over 1 million metric tons of annual production capacity. Despite being a little on the disappointing side, investors actually learned quite a bit about the progress at each facility on the recent conference call -- you just have to know where to look.

How is production faring?
Investors were desperately awaiting production updates on Moema, which is jointly operated by Solazyme and its feedstock supplier Bunge (BG -0.11%). All of the necessary equipment is installed, but the facility is (surprisingly) still commissioning and has only produced and shipped "initial" products; meaning production runs are not a regular occurrence. Although not very encouraging, irregular production is expected at this stage. Unfortunately, management maintained its stealthy stance and remained mum on progress from the facility that is five times larger than Clinton, simply stating:

Moema is a first of its kind facility and in the last couple of months we've started it up and are learning what it can do. We have work ahead with our current focus on establishing consistent production and reliable supply and from there we'll turn to the ramp up process.

I continue to raise an eyebrow at management's handling of Moema, which appears to have encountered more than just intermittent utility disruption as publicly disclosed. It seems quite possible investors won't receive meaningful updates until the end of 2014 or beginning of 2015, especially after CFO Tyler Painter noted that the company doesn't expect to consolidate results from the Solazyme Bunge Renewable Oils joint venture this year. Simply put, that means revenue from Moema will not be included in Solazyme's 2014 revenue figures. Ironically, that's also good news for investors in the short term. Why? It makes it easier to gauge progress at Clinton, which is the only commercial facility contributing to revenue.

Can we gauge commercial production progress?
There are a few ways to get an idea of Clinton's progress. The first method is simple: listen to the encouraging news provided by management. During the second quarter Clinton increased production by more than 40% and customer count by 50% compared to the first quarter. It's also supplying sample products to 75 different companies (Solazyme ended the quarter with 15 customers). While encouraging, perhaps these general updates do little to fulfill the appetite of investors for more data.

For something a little more quantitative investors can look at changes to inventories from quarter to quarter, although this approach includes several sources of error. Inventories include estimated values of goods at various stages of production on the day the quarter ends. A massive shipment of feedstock that arrives on the next day (first day of the following quarter) could mean Solazyme is gearing up for big increases in production, but it wouldn't show up on the balance sheet to tip off investors.

The big leap in raw materials (sugars, enzymes, and other fermentation nutrients) likely points to increased production in the third quarter at Clinton. Peoria has been operating on a consistent schedule since the beginning of the year (requiring the same amount of raw materials), while toll manufacturers produce Algenist.

A modest increase in work in progress goods could come from any of the three production sources, while the giant leap in finished goods appears to have come from Algenist and Peoria, not Clinton. How can we be relatively confident in that assumption? Here's what we knew before the call:

Knowing that, we can estimate production progress at Clinton as follows, which shows that a quarterly drop in finished goods from the facility was likely:

It's important to note that at nameplate capacity, or 100% capacity, Clinton will produce approximately 1,667 metric tons of renewable oils every month. The facility is currently far from that figure, but lowly production numbers are expected for the initial phase of ramp-up activities. In fact, investors won't see large increases in production volumes until the accelerated ramp-up phase begins within the next few months -- another key piece of information. The beginning of August marked six months from start-up, which was expected to take 12 to 18 months in two six-to-nine-month phases.

Clinton is currently nearing the end of establishing its operational baseline, but the next phase is the ramp-up to nameplate capacity (steady state in the graphic above). Based on the current progress, investors should expect the facility to reach nameplate capacity toward the end of the initial 12 to 18 month timeline, or near the beginning of August 2015. It may also hint that investors should lower their expectations for Moema's timely arrival. Why?

Clinton was an existing facility (formerly a biopolymer fermentation facility for Archer Daniels Midland and synthetic biology pioneer Metabolix), which should have allowed it to reach nameplate capacity relatively easily. Moema is a much larger, newly constructed facility that has already encountered initial problems. Obstacles may have been expected, but if Clinton takes the full 18 months to reach steady state operations I don't have much confidence Moema will be able to meet the same timeline. In other words, investors should expect the 100,000 metric ton facility to reach nameplate capacity no sooner than December 2015.

Can we replace petroleum with renewable oils?
The numbers appear to demonstrate that Solazyme is making steady progress at its 20,000 metric ton production facility in Clinton, Iowa. The information surrounding the progress at the 100,000 metric ton production facility in Moema, Brazil is a bit cloudier. While it would be great if the renewable oils manufacturer reaches nameplate capacity at its facilities within its initial 12 to 18 month window from start-up activities, the timeline was quite ambitious to begin with. Just keep in mind Mr. Market won't be as accepting of missed milestones as most of us.

Maxx Chatsko has no position in any stocks mentioned. Check out his personal portfolio, CAPS page, previous writing for The Motley Fool, or his work for SynBioBeta to keep up with developments in the synthetic biology industry.

TerraVia Is Falling 12% as Investors Lose Patience After Earnings
413%