Solazyme has made tremendous progress in the past decade. Let's hope that's not ruined by Wall Street. Source: Solazyme.

Last September I reminded investors about the potential pitfalls of putting too much faith into the projections of Wall Street analysts for renewable oil manufacturer Solazyme (NASDAQ:TVIA), although the warning holds for any company you may invest in. Over half of analysts surveyed said retail investors were "not important" and only 13.3% said they were "very important." In other words, most have an agenda that does not include you. Why should you make them part of your agenda for retirement?

At the time of writing, I had become fed up with the impossibly high revenue targets for Solazyme given the time constraints and realities of ramp-up activities at its two unfinished biorefineries and the average selling prices of its oils. After studying overly optimistic production scenarios and realistic selling prices -- constrained by market conditions -- it became glaringly obvious that Wall Street had gotten ahead of itself. Way ahead. In September, the average of 10 revenue projections for 2014 pegged Solazyme to $232 million in revenue, which was actually significantly lower than projections of $282 million just several months before.

It appeared that I had gotten through. Management dedicated a full slide of its presentation to addressing ramp-up activities in the following third-quarter conference call (and every call since) and Wall Street analysts quietly reduced their 2014 revenue projections to just $117.2 million (average of nine estimates), according to Yahoo! Finance. That is half of the average revenue projection championed just seven months ago! Hopefully, more realistic revenue targets will protect investors from getting ahead of themselves, too. Unfortunately, analysts have steered clear of addressing their downward revisions for revenue while setting higher and higher price targets for shares.

Do the events of the past seven months support a higher valuation for Solazyme stock? Or is Wall Street still a liability for Solazyme investors? Actually, as I mentioned last September, both may be true.

How Solazyme will earn a higher valuation
Solazyme has had anything but a smooth ride through the market since its IPO, or even since last September, for that matter. The company's market cap has risen 22% since my last article on Wall Street was published (from $685 million to $836 million), but share dilution has capped gains to just 3% in the same time period: 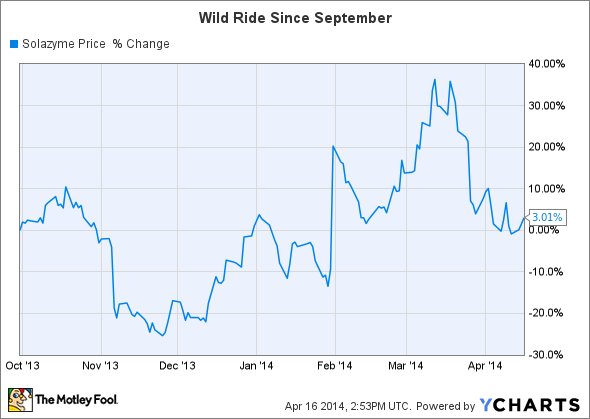 We can debate the efficiency of SynBio 1.0 companies and discuss how synthetic biology start-ups today are extremely lean with capital -- several start-ups founded last year will beat Solazyme, founded a decade ago, to profitability -- but pioneering is never easy. Besides, what is the point of being a publicly traded company if you cannot leverage the market to raise large amounts of capital when needed? Solazyme has used debt and share offerings as responsibly as possible and will likely end the first half of 2014 with $300 million in cash to spend on capacity expansion efforts. That is a massive positive for long term investors.

Aside from a strong cash position, there are several catalysts to look forward to regarding production. Everything hinges on when the oil recovery units at Solazyme's commercial facility in Moema, Brazil, officially come online (discussed below), but assuming an announcement is made this month, the company is on the path to amazing revenue growth. Consider that it generated just $39.8 million in total sales in 2013. That will grow with the demonstration facility at Peoria, Ill. now producing food ingredients, contract manufacturers continuing to produce Algenist products, commercial oils being produced during ramp-up at Clinton/Galva, Iowa, and commercial oils being produced during ramp-up at Moema.

Once all 120,000 metric tons of oil capacity are online and operating at nameplate (when ramp-up is completed) in the second half of 2015, Solazyme will have over $240 million in revenue potential. It is difficult to argue with that growth -- and Solazyme will be given a higher valuation once the path to nameplate clears up further. The company's market cap will be lifted even higher with announcements concerning capacity expansions, several of which are expected between now and the end of next year. Essentially, Solazyme's valuation will be tied to operating capacity, capacity in ramp-up, and capacity expansions in the pipeline, as well as to lesser intangibles such as intellectual property, product development, and market disruption.

Why Wall Street is still clueless
I remain optimistic about Solazyme's future -- now more than ever with more cash and Clinton/Galva ramping -- but it is still blatantly obvious that Wall Street analysts are not to be trusted by individual investors. The company's strong cash position may allow for other discrepancies to be overlooked, but current Wall Street projections are far from bulletproof.

For instance, after guiding Moema to begin ramping and producing saleable product by the end of 2013 management announced that last-minute facility enhancements would push production into the first quarter of 2014. Upgrades will allow for the facility to operate more efficiently and more reliably produce large quantities of food products, which is probably the largest single opportunity for Solazyme. However, start-up was later pushed to April and is currently hung up on downstream oil recovery units -- something that Solazyme has never handled on-site in large quantities. Analysts have looked the other way on this delay without further revising revenue targets for 2014 downward. That could become a problem by the end of the year. The company could very well announce start-up in April and meet or exceed current projections for 2014 revenue of $117.2 million, but the margin of error has tightened up considerably. Moema will only have eight months of ramp-up to contribute to 2014 revenue. I will await an announcement on Moema before publishing a detailed revenue model, but the most optimistic ramp-up scenario I have generated (Peoria at nameplate since January, Clinton/Galva takes 12 months to reach nameplate, and Moema begins ramp-up by May 1st) barely meets Wall Street targets. Again, that is not necessarily bad news. I simply want to give investors a detailed analysis rooted in facts known to date, rather than static numbers on a screen or baseless pessimism or optimism.

More worrisome for investors are projections for 2015 revenue. The average of nine estimates, again from Yahoo! Finance, calls for Solazyme to reel in $335.6 million in revenue next year. That is impossible. Consider that both Clinton/Galva and Moema would need to be operating at nameplate capacity (they will not be) and churning out oils with an average selling price of $2,750 per metric ton. Management is guiding for an average selling price of $2,000 per metric ton across the platform. Where Wall Street thinks an extra 38% in sales or selling prices will come from is unclear.

Foolish bottom line
Overall, I still see an amazing long-term opportunity for buy-and-hold investors interested in Solazyme's future. There are clear pathways to generating substantial revenue and eventually reaching profitability. It really is not a question of if but when. Still, investors should not be shooting from the hip or blindly pinning their expectations to Wall Street projections. It will be difficult to listen to the signal and not the noise in the early days of the industry, especially considering that comparisons are virtually nonexistent (remember, no companies have been able to target such diverse industries with one platform), but the opportunities for above-average growth remain apparent. It just may take a bit longer than expected to achieve.