Xilinx (NASDAQ:XLNX) is the world's leading provider of freely programmable gate array, or FPGA, circuits, but investors are looking skeptically at the company and its stock following the July release of its first-quarter report. Revenue came in substantially below consensus estimates and targets for the company's second-quarter performance were revised down. This corresponded with an approximately 19% dip in the company's price to a yearlong low of $39.12 a share. 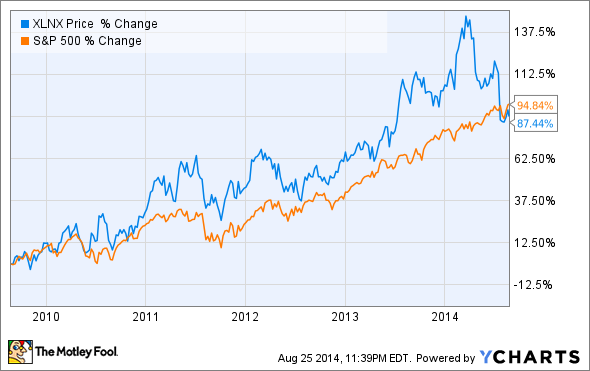 While Xilinx offers an attractive 2.7% dividend yield and an industry-best price-to-earnings ratio of approximately 19 times trailing earnings, there are still reasons to approach the company's stock with caution. The following three factors could apply significant downward pressure on Xilinx's share price.

Growth in China might not go as planned
In its most recently recorded fiscal quarter, 43% of Xilinx's revenue came from Asia-Pacific markets. As the biggest market for smartphones, China is central to the company's earnings and growth plans, and the slowed rollout of the nation's 4G LTE network was one of the main reasons that revenue came in below expectations last quarter. The company's 28-nanometer nodes are key components in cell phone base stations used by China Mobile. The circuit maker stands to benefit as more bases are built, but the political and economic climate in China present obstacles for an American tech company like Xilinx.

Xilinx and its chief competitor, Altera (NASDAQ: ALTR), effectively have a duopoly on the production of programmable logic devices, and it's not unreasonable to believe that regulatory measures could be used to create a market climate more favorable to domestic base-station vendors such as ZTE and Huawei, as well as China Mobile and other carriers.

Relying on Xilinx and Altera for FPGA production creates economic and defense liabilities for China, and the nation has a clear interest in improving its ability to manufacture semiconductors. Even if Xilinx's intellectual property is not infringed upon, downward pressure on its pricing could be applied, and the possibility exists that Xilinx could find itself the subject of antitrust investigations and penalties. If the Chinese market becomes less hospitable, Xilinx's otherwise strong operating margins could be negatively affected.

Altera looks to be strong competition
In 2013, Xilinx claimed 51% of the global programmable logic device market, while Altera captured 38% of the segment. With approximately 70% of global 28-nanometer node sales, Xilinx is in good position to benefit as use of these circuits grows this year. However, Altera looks to be mounting an increasing challenge to the company's dominance. Forty-three percent of Altera's revenue in its last fiscal year came from the sale of 28-nm chips, and Huawei and ZTE honored the company with awards that could be taken as indications that the Chinese companies will shift more of their business from Xilinx to Altera.

Altera also looks to enjoy an advantage heading into the next generation of die shrinks. While Xilinx shipped its 20-nm chips to market ahead of its competitor, the circuit architecture is not yet widely used, and Altera's own 20-nm offering may enjoy greater support due to software advantages on the company's platform. Even worse for Xilinx, Altera is partnering with Intel to produce 14-nm chips that could gain market favor over its upcoming 16-nm set. Altera's presumed technological advantage might help it position its FPGA offerings as the best solution for customers looking to move away from application-specific chips where possible.

Investors could lose faith in Xilinx management
The reliability of Xilinx's guidance has recently been called into question, and perplexing comments from company executives have provided additional reasons to view its public statements and projections with wary eyes. CEO Moshe Gavrielov has said that his company will benefit from a resurgence of wireless and defense contracts this quarter, yet the company expects revenue to remain flat or decrease by 4% from the previous quarter. This projected stagnation or decline in revenue is supposed to arrive even as rollout of 4G LTE in China spreads, suggesting Gavrielov's claim may be inaccurate, or that the company will see significant deterioration in other parts of its business.

The last quarter saw 50% of Xilinx's revenue come from communications and databases, and 31% of its business derived from industrials and aeronautics and defense, which would seem to suggest significant decline in its other segments if its chief revenue generators are set to rebound. Additionally, Xilinx's stated belief in an uptick in wireless and defense business this quarter arrived in conjunction with a downward revision of its yearly revenue growth from 10% to 5%.

In May, Xilinx CFO Jon Olson put forth very rosy portrayals of the company's position in China and broader future. These statements, in conjunction with the company's disappointing quarterly report and forecast revision, contributed to a Louisiana law firm's decision to open an investigation into whether the company violated state and federal securities codes. If the next quarter's results expose additional inaccuracies in Xilinx's guidance, or if problematic news emerges before then, investors might lose patience and confidence in the company's executive team.

Foolish final thoughts
As the company is a dominant player in a growing space, there are strong reasons to consider a position in Xilinx. That said, investors should weigh the company's recent stumblings and future uncertainties against its hypothetical potential. While the risks facing Xilinx don't assure that it will suffer going forward, their capacity to trigger a falling share price makes them worthy of consideration.