The recent history of Atlantic City is depressing, but there are also reasons to think conditions will only get worse.

Trump Taj Mahal owner and operator Trump Entertainment filed for bankruptcy again yesterday, less than a week after the two-year-old Revel resort in Atlantic City closed its doors to the public. Casinos around the city are either closed or teetering on the brink of insolvency, and conditions have gotten so bad that Governor Chris Christie recently allowed casinos to take sports bets, something that's never been allowed in New Jersey.

So, how did Atlantic City get this bad? And more importantly, can it ever make a comeback?

The driver of Atlantic City's demise
Before the recession began in 2008, Atlantic City was becoming a healthy gaming region nearly three-quarters the size of Las Vegas. MGM Resorts (MGM -0.51%) and Boyd Gaming (BYD -1.73%) had been part of a renaissance when they opened the Borgata Hotel Casino & Spa in 2003, showing that new resorts could thrive in the region. 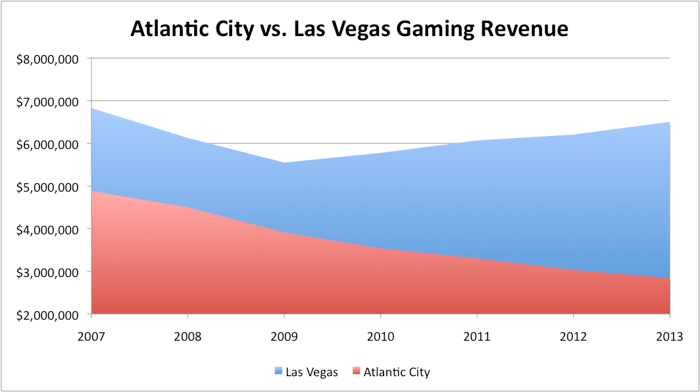 But when the recession began, Atlantic City was hit especially hard by falling gaming revenue as consumers stayed home rather than gambling as unemployment rose. Worse yet, states around Atlantic City, desperate for new sources of revenue, turned to gaming for easy tax dollars. Maryland, Pennsylvania, Massachusetts, New York,  and other states have expanded gaming offerings in an effort to increase tax revenue in their states. The result has been a boom in gaming in states like Pennsylvania, which is now second only to Nevada in gaming revenue.

The problem is that one state's growth comes at another's expense, and Atlantic City has been taking the brunt of the East Coast gaming expansion.

The Revel casino, opened in 2012, has already closed its doors.

Companies giving up rather than fighting on
With gaming revenue falling so quickly, it's easy to see why companies are giving up on Atlantic City. Caesars Entertainment (CZR) closed the Showboat Casino and The Atlantic Club earlier this year, and along with the closing of Revel and Trump Plaza, the region is struggling just to keep resorts open. Trump Entertainment's bankruptcy is just the latest high-profile failure in the region.

The long-term problem is, there's no light at the end of the tunnel for Atlantic City, which may never recover from the decline of gaming.

Atlantic City's best days are long gone
The draw of Atlantic City was once the unique gaming and entertainment attractions offered to the Atlantic Coast region. Bankers from Wall Street would head down for a weekend, prize fights were once held regularly, and millions of middle-class gamblers were a relatively short drive away from the city's slot machines and table games.

But the novelty of Atlantic City has deteriorated as casinos big and small have spread across the region. If you live in New York City, Philadelphia, or Boston, it's now closer to go somewhere other than Atlantic City for gaming, and it's likely that destination is newer than most of Atlantic City's offerings.

Unlike Las Vegas, Atlantic City wasn't able to reinvent itself to stay relevant for not only gambling but also entertainment and food & beverage. It's just not the diverse entertainment destination that Las Vegas is. That was the failure of gaming companies and regulators in New Jersey.

Given the increased competition and revenue trends in Atlantic City, I simply don't see any way to save the city from being a casino wasteland. Its best days are behind it, and investors should be very wary of any company with operations there.