Bank of America has had a tough go of things in recent years, but all signs point to it truly transforming itself into one of the best companies in America.

In partnership with Glassdoor, our investment analysts are taking a closer look at some of the most popular companies in Glassdoor's career community.

Knowing just last month Bank of America (BAC 2.32%) reached a historic $17 billion settlement, its total legal tab stands at nearly $80 billion, it has faced countless protests, and politicians across the country have questioned its previous actions -- to say nothing of the $125 billion in expected losses from the loans it issued sustained between 2008 and 2012 -- it is tough to imagine Bank of America could be considered one of America's best companies.

Defending the past actions of both it and the companies it acquired -- namely, Countrywide -- would be misguided and frankly, difficult.

But when considering its recent behavior and where it is poised to go into the future, it is understandable why Bank of America can be placed among America's best companies for investors, customers, employees, and indeed the larger world.

Investors
Depending on the timing of their initial investment, the moods of investors in Bank of America has likely run the gamut of emotions. Since 1991, among the biggest banks, it has outperformed only Citigroup (C 2.64%) and lags the broader market as well as peers JPMorgan Chase (JPM 1.73%) and Wells Fargo (WFC 3.35%) tremendously:

But that picture is even more striking when you consider when exactly an investor purchased shares of Bank of America over the last decade. Those who bought in before the financial crisis are reeling, whereas those who purchased it in the depths of the Great Recession likely couldn't be any happier:

Yet with all that in mind, there are three reasons to think its current investors will be pleased with where it goes into the future.

The first is the operations of its core businesses. Undeniably, these operations have faced their difficulties, but as revealed at a recent presentation by its Chief Financial Officer Bruce Thompson, the bottom line net income of its four core businesses has recognized impressive improvement relative to 2012: 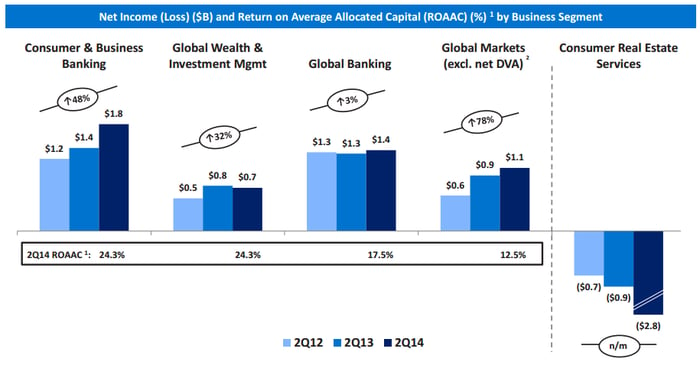 One of the reasons behind this improvement is the fact that through the initiatives of the bank to operate more efficiently, it expects by the end of this year it will have achieved cost savings of $2 billion each quarter.

In addition, it has also seen impressive results in the core operations of its more traditional consumer & banking business, its wealth management arm, and its investment banking units.

Of course, its troubled Consumer Real Estate Services business has already seen staggering losses of nearly $8 billion this year thanks to the legal settlements it has faced, but the bank suggests its legal settlements have resolved 95% of the balances of the troubled bonds it issued. As a result, it appears that those will be dwindling sooner rather than later.

In addition to the strong performance recognized by its four core businesses, there's also the reality that Bank of America currently trades at a very reasonable valuation. As colleague Jordan Wathen noted earlier this summer, it isn't simply reasonable, but Bank of America is cheap :

Conservatively valued, Bank of America's fair value is likely found at least 25% higher than where it trades today ... That's not to say Bank of America will follow a straight path higher. But for the patient investor, Bank of America's individual assets present a very attractive value. You just have to be willing to wait it out.

And lastly, all signs point to CEO Brian Moynihan and the rest of the Bank of America leadership team steering the ship in the right direction. And while this is less quantifiable and tougher to grasp, his words when he was introduced provide a great deal of encouragement on where he intends to lead the bank:

What we need to do now is very simple. We need to execute. This company has a long tradition of operational excellence and strong execution. My goal is to refocus our efforts and attention on those core capabilities that will make us the best financial services firm in the world.

Customers
Like its investors, depending on the timing of the start of the relationship, the customers of Bank of America likely have vastly different opinions on it too. But one of the most encouraging charts from its latest investor day outlining the condition of the bank's customers was the remarkable improvement seen in its customer service performance:

While the presentation is a touch odd being communicated in basis points, we're to see that its customer satisfaction increased by 10.4 percentage points over the last two years. And while we don't know the baseline, regardless if it moved from 25% to 35% or 75% to 85%, it is a sign of encouragement.

In addition -- as shown below -- we have also learned Bank of America's customers think more highly of it than Wells Fargo customers felt about their bank, as measured in its Net Promoter Score (NPS) by Satmetrix. 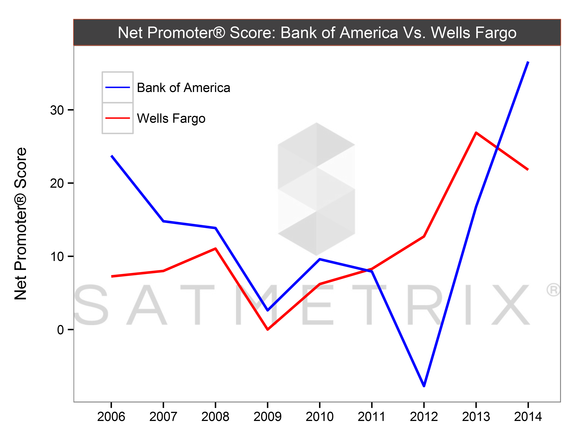 All of this is to say, while it delivered a fair share of troubles to its customers, Bank of America is clearly both endeavoring and succeeding to improve those relationships and deliver desired results.

Employees
While American Banker noted Bank of America has one of the lowest reputations among noncustomers in its 2014 Survey of Bank Reputations, it's important to see Glassdoor reveals its employees think very highly of it relative to its better thought of peers Wells Fargo and Citigroup:

In many ways, this lead is understandable, as it offers a variety of great benefits. From a financial perspective, it matches 5% of an employee's compensation contribution into a 401(k), and it will also contribute an additional 2-3% on top of that. That means an employee who saves 5% of their salary in a 401(k) could see an additional 8% contributed by the bank.

The employees themselves highlight the fact it offers both maternity and paternity leave for parents, will offer up to $8,000 for the adoption of a child, reimburses eligible tuition expenses for employees, and also has solid vacation benefits and insurance options.

With all that in mind, it's no wonder its employees enjoy it.

Things are looking up for Bank of America.
Image Source: The Motley Fool.

The larger world
Finally, Bank of America is also doing its part to improve the conditions of not only its investors, customers, and employees, but also the broader world. Earlier this year it released its 100-page Corporate Social Responsibility 2013 Report.

The bank clearly recognizes the incredible position it is in -- it has more than $2 trillion in assets after all -- and the report begins by noting:

As a leading global financial services company, our economic, human, physical, and social resources give us enormous reach and potential to make a significant impact on people and communities around the world.

It is clearly doing its part to make a sizable impact. Bank of America has committed to $70 billion by 2023 -- since 2007 it has had $27 billion -- toward the financing of environmental business activities directed toward climate changes and natural resource demands.

And perhaps the most remarkable number is that over the last five years, the bank has directed more than $675 billion toward community lending and investing.

The final thought
Bank of America undeniably had a stretch of its history that no company would want. And while there have certainly been mistakes along the way, in more ways than one, it is clearly on the path to truly turn things around, and that should be applauded.