Every company has one number that defines its success more than any other. For Pfizer (NYSE:PFE), the world's largest pharmaceutical company, that number is... $10.7 billion.

Pfizer has four blockbuster drugs coming off-patent in the United States in the next four years: Celebrex and Zyvox in 2015, Viagra in 2017, and Lyrica in 2018. And none of these four drugs will maintain patent exclusivity in the European Union -- one of the other huge pharmaceutical markets -- past 2016. The combined revenue of all four drugs last year was $10.7 billion -- these were four of Pfizer's six best-selling drugs in 2014.

It's unrealistic to assume that Pfizer will lose all $10.7 billion in revenue from these drugs by the end of 2018, but the 2012 expiration of megablockbuster cholesterol treatment Lipitor offers some recent history to draw on. Lipitor's peak-year revenue of $13.7 billion in 2006 remains the all-time record for drug sales in a single year. Last year, Lipitor's sales were $2.3 billion, down from $9.6 billion in 2011. In two years, Pfizer lost two-thirds of its Lipitor sales, and the impact on its overall revenue is easy to see: 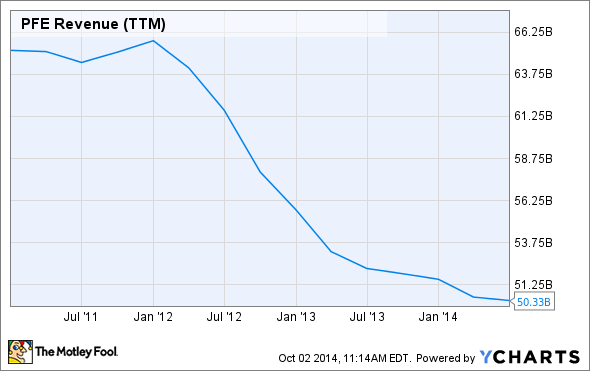 Pfizer has maintained its bottom line despite this damaging loss in large part because it's slashed its multibillion-dollar R&D budget, which is down nearly 30% -- a decline of $2.7 billion -- since the end of 2010, which is more than the rise in its net income of $2.1 billion during that time frame: 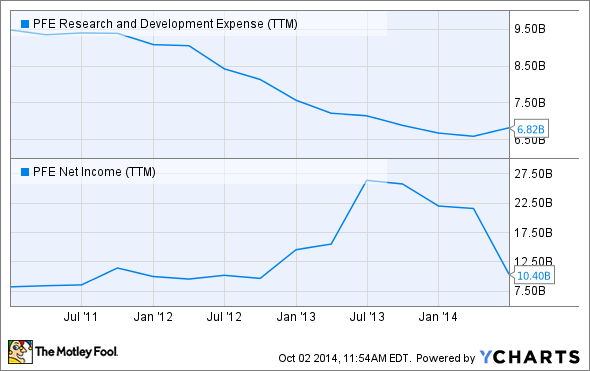 Despite the drawdown in R&D, Pfizer still boasts 83 drugs in development, with 26 in or past their Phase 3 trials. (The same drug may be in trials to treat more than one condition.) However, recent launches of Xeljanz for rheumatoid arthritis and Eliquis for blood clots have disappointed, with just $240 million in combined sales during the second quarter.

Pfizer's most promising Phase 3 drug, palbociclib, a breast cancer treatment, has seen a wide range of sales projections, with analysts forecasting anywhere from $1 billion to more than $6 billion in annual revenue by the end of the decade. By that point, the company will lose patent protection on four other drugs -- Bosulif,  Chantix, Inlyta, and Xeljanz -- with combined sales  of nearly $1.4 billion, in addition to the four blockbusters we've already examined. Palbociclib also faces competition in the red-hot oncology sector, as Novartis (NYSE:NVS) and Eli Lilly (NYSE:LLY) are also developing similar treatments that could keep its peak sales closer to the low end of these projections.

Pfizer's pipeline problems and the damage of patent expirations already past resulted in company-issued guidance falling by $500 million from earlier estimates in the second quarter, with EPS guidance now a full $0.10 lower on both low and high ends. These issues are widely cited as the reasons for Pfizer's heated -- and eventually unsuccessful -- pursuit of British drugmaker AstraZeneca (NYSE:AZN), which boasts an intriguing oncology pipeline.

Patent expirations are threats to every major drugmaker today, but Pfizer is staring down one of the costlier patent cliffs in the industry. Its ability to develop new blockbusters will be key to any bullish investment case, and a huge decline in R&D spending makes this prospect less certain than ever.