It's been a rough ride for Ford investors over the past 12 months. However, this is a rebuilding year, and the company should lay the groundwork for a smooth ride throughout the rest of this decade. Here's how. 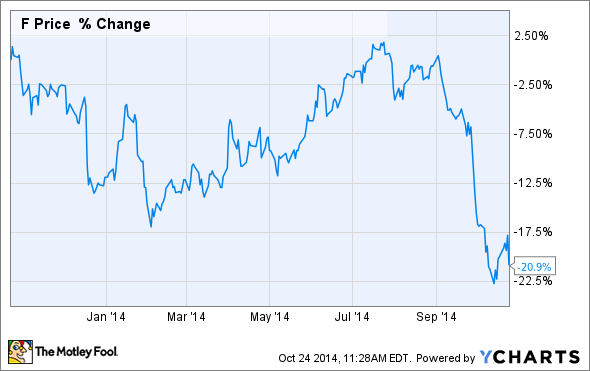 Two of my favorite things in this world, aside from unhealthy food and Starbucks coffee, are business and sports. Many times the two go hand in hand, and Ford Motor Company's (F 0.15%) journey through 2014 reminds me of a situation many sports teams are in now.

Take the Oklahoma City Thunder, for example, one of the NBA's best teams over the last three years. How did the team get to that point? The Thunder had to endure years of hardship and heavy investing in its future -- albeit through the draft, not research and development. Those years of pain that resulted in high draft picks returned 2014 NBA MVP Kevin Durant, and arguably one of the league's best point guards in Russell Westbrook, among others.

That's where Ford finds itself in 2014. It is launching three times as many vehicles in North America this year as it did in 2013, and that heavy investment in the automaker's future is weighing on this year's profitability more than anticipated. However, in 2015 and beyond, these new vehicles are expected to become the automaker's backbone and will send Ford's top and bottom lines quickly surging higher.

How bad is it right now?
Even with all of Ford's potential, investors are finding it difficult to look past 2014 and early 2015. That negative short-term outlook, sadly common in the market these days, has sent Ford's stock down nearly 10% in 2014 and more than 20% over the last 12 months.

To make things worse, Ford's Europe market is no longer on track to break even for full-year 2015. That was a big blow to investors ready for Ford's sound decision-making to save billions of dollars in losses from its European operations. Though its estimated losses will reach $1.2 billion this year, that is still an improvement from 2013's near-$1.5 billion in losses. On the bright side, Ford's focus on refreshing its vehicles at a rapid rate has increased the automaker's market share in the region by 30 basis points to 7.6% compared to last year's third quarter.

In addition to the misery in Europe lasting a bit longer than expected, South America crashed the party and brought along an estimated $1 billion in losses for the full year. That's a huge blow, considering Ford essentially broke even last year in this market.

Despite the North America and Asia-Pacific regions performing well, Europe, South America, and warranty costs contributed to Ford's automotive sector's operating margin falling from 7% in last year's third quarter to 2.5% in the same period of 2014. Those three negative factors also weighed down third-quarter pre-tax profit, which dropped from $2.2 billion in 2013 to $686 million this year.

Ford's 2015 F-150 will be critical for the automaker's future success. Image source: Ford.

What we must focus on
As long-term investors, we must ignore short-term volatility as long as we believe in the long-term plan. Ford's recent vehicle launches have all been major successes. The Fusion and Escape have a chance to do something for Ford in the U.S. that only its F-Series truck has done in the last decade: surpass 300,000 sales in a full year. Ford's Focus, which is nearing a new design, has been the world's best-selling nameplate for two years, and the Fiesta was the world's best-selling subcompact nameplate last year.

Those vehicles aren't a fluke, and as Ford continues to roll out new designs, investors should expect revenues and bottom-line profits to surge throughout the remainder of this decade. Similar to the way in which Oklahoma City Thunder's terrible couple of years resulted in high draft picks to secure Kevin Durant and other stars, this year's pain for the company will bring on a groundbreaking all-new F-150, which contributes the majority of Ford's profits, and a new Mustang. Both will continue to be the heart and soul of Ford.

The rest of 2014 and early 2015 will be painful, but we knew that back in January. Look for Ford to improve sales, market share, and profits with a strong lineup of new vehicles next year. As long as the automaker executes and comes through on its goal of 2015 pre-tax profit between $8.5 billion and $9.5 billion -- which would be one of the best years in Ford's history -- everything that happens to the stock price between now and then is just noise. Remember that, despite all the noise, Ford is nearing a point in time at which it can better reward shareholders for their patience.