If you're closely following the 3D printing space, you know that Hewlett-Packard Company's (NYSE:HPQ) much-anticipated entrance into the fast-growing 3D printing market arrived last week. The 2D printing king unveiled its new 3D printing technology called "Multi Jet Fusion" and the enterprise-focused 3D printer based upon this tech that it plans to bring to market in 2016. The printer is reportedly 10 times faster than those powered by the leading 3D printing technologies, while sporting high precision, high resolution, and brilliant color capabilities -- and it will be priced less than the competition.

How concerned should investors in industry leader Stratasys Ltd. (NASDAQ:SSYS) be?

HP's Multi Jet Fusion tech is impressive. According to Computerworld, here's how Terry Wohlers, the 3D printing industry guru who runs the company that publishes the annual Wohlers Report, weighed in:

HP's new 3D printer, if people see that and they're not blown away, then they don't understand what it takes to build parts using conventional manufacturing. It's not only a game changer, it's going to rewrite the rules in the 3D printing industry.

How does HP's 3D printer achieve its industry-topping speed? By employing a unique feature -- a wide print bar with about 30,000 microscopic nozzles spraying 350 million drops per second of thermoplastic onto the print platform. The drops are 20 microns in size, which allows for extremely high resolution of about 1,200 dpi (dots per inch); most comparable printers have resolutions about half that. 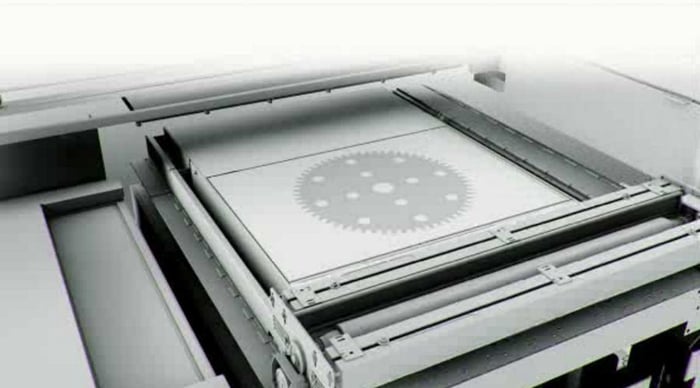 HP showed off some examples demonstrating the fine detail and brilliant color capabilities of its printer. Here's a slick model of an oil rig:

Simplified, HP's tech can be thought of as a kind of binder jetting technology, with a touch of laser sintering tech thrown in. Like binder jetting, the process involves the application of a binding agent -- which HP calls a "fusing agent" -- to the materials that are being built up layer by layer. And like laser sintering, the process involves applying what HP calls an "energy source" to fuse the materials.

As for materials, HP's printer will initially be able to print in a wide range of plastics. However, the company has said that it plans to expand the printer's capabilities to include ceramics and metals.

I'm a bit skeptical that this tech will be able to successfully compete with direct metal laser sintering --the most widely used metal 3D printing tech -- and electron beam melting when it comes to printing metals. (Among the publically traded players, 3D Systems offers DMLS printers, while Arcam is the sole manufacturer of EBM printers.) Binder jetting generally isn't considered as effective as these technologies at producing high-density metal components. Very high densities are required for critical end-use applications, such as in the aerospace and medical implant industries. That said, HP is surely pouring money into research and development, so a competitive metal 3D printer is possible.

Does Stratasys have anything to fear from HP?

The short answer is "Possibly down the road." While HP has had well-publicized stumbles in the recent past, it shouldn't be underestimated. The company has deep pockets and already counts as customers many of the companies that it will likely be targeting with its 3D printer. So, it has the potential to offer compelling package deals and force margin squeezes on its smaller, pure-play 3D printing competitors.

That said, there is still a huge difference between unveiling a compelling product and actually successfully bringing it to market. For this reason -- and the reasons I'll outline below -- investors in Stratasys should sit tight, as there is no reason for undue concern at this point.

The 3D printing market is projected to explode in size
According to the 2014 Wohlers Report, revenue for the industry grew year over year by 35% to $3.1 billion in 2013. Wohlers projects that the market will exceed $21 billion by 2020. That's a torrid annual growth rate of more than 31%. Other companies are predicting even faster growth.

So, there's room at the 3D printing party for a new entrant, even a big player.

HP's entrance could accelerate the industry's growth
HP's entrance into the market could benefit Stratasys by helping increase the total size of the market. 3D printing is still in its early stages, especially for production applications. The entrance of a company of HP's size into the market should help increase awareness of the technology, which could speed up the market's already projected fast growth.

Additionally, when a new formidable company enters a market, it forces existing players to up their innovation game. So, it's likely that the two leaders, Stratasys and 3D Systems, will ramp up their R&D spending. This could unleash even faster innovation in the space, which could lead to an acceleration in the growth of the market.

HP's 3D printer launch is at least two years away
It won't be until 2016 at the earliest that HP launches its printer. One-and-a-half to two years is an eternity in the tech world. Stratasys' product offerings won't remain static during this period. The company has maintained a steady R&D budget in the 10%-11% of revenue range, which has enabled it to continue to improve its technology and roll out new products.

Stratasys' largely R&D-driven organic growth is a key reason that it should be effective at fending off competition from HP and other new entrants into the market. While competitor 3D Systems has a few advantages in its moat bag of tricks that Stratasys does not -- namely its greater diversity of technologies, its metal printer offerings, and its Project Ara partnership with Google to develop a high-speed, continuous, fabrication-grade platform -- the fact that its growth has largely been acquisition-driven could make it more vulnerable than Stratasys over the long term, in my opinion.

Stratasys is diversified
Stratasys' revenue breakdown by segment for Q2:

Stratasys closed on its acquisitions of Solid Concepts and Harvest Technologies, both of which provide on-demand 3D printing services, in the second quarter. So, its services percentage of revenue will almost surely increase in the near term.

Stratasys has three 3D printing technologies upon which its 3D printers are based:

Which technologies and business segments might be most vulnerable to competition from HP's printer?
Stratasys' proprietary PolyJet technology is the most similar to HP's tech. It jets layers of UV-curable liquid photopolymer onto a build tray. Its key strengths are its ability to produce complex shapes, intricate details, and smooth surfaces.

However, there are at least three factors that should help mitigate HP's competitive threat here:

Stratasys' Fortus 3D printers, which are powered by FDM tech, could also be vulnerable. These printers are primarily targeted to production applications, so HP's printer's speed advantage should put it in play as a competitor for some applications.

In addition to targeting enterprise customers, HP will surely be marketing its 3D printer to on-demand 3D printing service operations, which could present competition to Stratasys' services segment. Last fall, HP CEO Meg Whitman implied such when she was quoted by the The Register as saying: "[We're asking] how do we commercialise to print faster, at lower price points, to enable service providers?"

In fact, Shapeways CEO Peter Weijmarshausen joined HP execs on the stage last week to share his accolades of the printer. Shapeways is the Amazon.com of the 3D printing space, providing 3D printing services for consumers through to larger businesses, with a focus on consumers and small businesses.

Which products appear safe from competition from HP?
The company's desktop models should be safe, as HP's initial offering is intended for a factory floor. Stratasys' well-known MakerBot printers fall into this category, as do its uPrint and Mojo printers. These latter printers, which are based on FDM tech, are commercial-grade machines targeted to enterprise customers.

Additionally, Stratasys' WDM 3D printers shouldn't be affected by HP's entrance into the market. These printers build waxlike castings for the dental market. Stratasys doesn't break out its printer sales by product line, but it's a big player in the dental market.

No matter how compelling HP's 3D printing technology is, it's highly unlikely that one technology is ever going to be the best fit for all -- or even most -- applications and materials. Furthermore, since the 3D printing market is projected to explode in size and Stratasys has proven that it can both innovate and execute well, its future still looks bright at this point.