Suddenly Sears seems popular, at least with investors who bid up its stock on Friday.

The stock market sent Sears Holdings (NASDAQ:SHLDQ) stock soaring 31% on Friday November 7, 2014 after the retailer reported estimated third quarter results that showed seeming improvement in same store sales at both Sears and Kmart, but the announcement was really more of a platform to disclose plans for creating a real estate investment trust.

It is the creation of a REIT that will initially house some 200-300 of its stores -- but with the ultimate goal of holding almost all of the retailer's 1,800 stores -- that got the stock market excited and sent Sears stock rocketing higher. Because it infuses the company's balance sheet with much-needed cash heading into the holiday shopping season, it alleviates a lot of the liquidity concerns vendors and investors had. But that's exactly the wrong takeaway from the news, and the development should actually be a cause for concern.

Getting limber with financial gymnastics
Bullish investors in Sears have long maintained the retailer's real estate holdings were the real underlying value in an investment in a business that was otherwise withering away. The creation of a REIT is simply a maneuver to monetize those assets, and indicates that chairman and CEO Eddie Lampert may be at last running out of financial gimmicks to prop up his retail empire.

Sears said it is actively exploring a REIT transaction involving several hundred company-owned properties through a sale-leaseback transaction. The retailer would continue operating the stores sold to the REIT under one or more master leases, but it would realize substantial proceeds from their sale, enhancing Sears liquidity.

Further, shareholders would benefit for any sale-leaseback transaction made because Sears would distribute on a pro rata basis rights to purchase shares in the REIT, which would help the retailer fund a portion of the purchase price for the stores. Any balance left over would be financed through a mortgage or other debt financing.

Not the REIT stuff for common shareholders
As this ought to generate a significant cash influx, coupled with the cash its getting from the previous rights offering announced last month and the sale of its stake in Sears Canada, the retailer's money woes are solved, right?

Nope. The various deals announced are more a benefit to Sears big shareholders, including Eddie Lampert's ESL Investments and Fairholme Capital Management, and less helpful to the department store chain itself. It also burdens Sears with new lease payments at a time when it's still hemorrhaging cash and really can't afford it.

While investors would get shares of the REIT, the investment in Sears itself would be damaged because it would no longer have those assets in its name. Many of the financing deals it previously wrangled were based upon the value of the real estate, and with those assets gone, raising money in the future may be a problem. 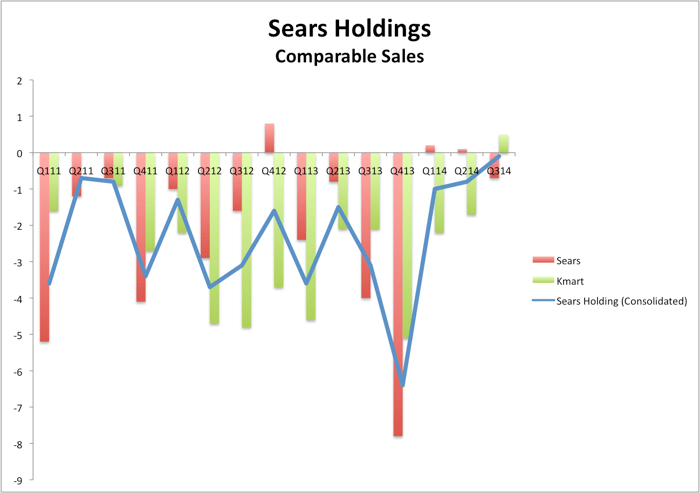 And though the retailer reported better same store sales results -- they were up a half percent at Kmart (the first time in years they've been positive), but down 0.7% at Sears -- it still anticipates reporting a net loss for the quarter of $630 million, yet another quarter in a long and growing string of red ink.

Tricks worthy of a hedge fund manager
Just like Eddie Lampert's use of such hedge fund-oriented financial sleight of hand like total return swaps, stock buybacks, asset sales, and spinoffs to artificially bolster its financial statements and make Sears Holdings position and performance look better than it really is, the rights offerings and the creation of a real estate investment trust is just more of the same and shows that both the CEO and the retailer have probably reached their end game.

And rather than being excited at the prospects and boosting its shares high, investors should be very afraid.