The latest numbers are in, and there are three stocks hedge funds can't get rid of quick enough. And one of them will surprise you.

The sell-off
Every quarter, S&P Capital IQ releases its Hedge Fund Tracker, which provides insight into what the 10 biggest pure-play hedge funds -- those focused almost exclusively on stock investments -- are doing with their money.

And while there was much more buying than selling in the third quarter of this year (in total, the hedge funds grew their portfolios through nearly $16 billion in investments), the information technology sector alone saw the sales outpace the purchases: The hedge funds decreased their positions in total by $500 million, either by reducing their existing positions or by closing out stakes entirely.

One of the biggest reasons behind the dip in information technology holdings was that the hedge funds reduced their existing positions in Baidu (NASDAQ:BIDU) by $920 million.

But Baidu wasn't alone, as the hedge funds also sold off major positions in both Capital One (NYSE:COF) and Regeneron Pharmaceuticals (NASDAQ:REGN) to the tune of $720 million and $660 million, respectively.

Bye-bye, Baidu
In the third quarter, which ended Sept. 30, it seemed as though the news was nothing but good for Baidu.

The company absolutely crushed its second-quarter results, with revenue up 59% and adjusted earnings up 38%. This came to the surprise of many -- as colleague Rick Munarriz notes, "Analysts were only holding out for a single-digit percentage advance." As a result, Baidu's shares soared, gaining nearly 15% in the third quarter.

So why did the hedge funds unload their positions? That's an easier question to ask than to answer -- Morgan Stanley actually upgraded its position on the stock. But one has to believe these funds sold off Baidu shares partly to cash in their gains while they could.

What's in their wallet? A lot less Capital One
Next on the list of companies that saw their stakes get slashed is Capital One. But whereas Baidu saw its position reduced by four firms, one hedge fund alone was the reason Capital One fell so dramatically. Viking Global Investors, with $26 billion in assets, cut its stake in the bank by a staggering 86%, or $719 million.

While Capital One's quarterly results didn't knock it out of the park like Baidu's, it's hard to imagine they were the reason Viking shed its shares. As The Wall Street Journal reported, the earnings per share of $2.04 surpassed the $1.82 expected by analysts and marked a 10% improvement over the prior year.

But one has to wonder whether Viking sold off such a massive amount of Capital One because it simply thought Citigroup (NYSE:C) provided better value. The firm, managed by billionaire Andreas Halvorsen, took an entirely new $775 million position in Citi, which is almost a 1-to-1 match to the $719 million it sold off in Capital One.

While I'm no big fan of Citigroup, the reality that it trades at a nearly 40% discount relative to Capital One (0.96 price-to-tangible book for Citi versus a 1.53 P/TBV for Capital One) could have been enough to shift Halvorsen's opinion.

Eyeing upward
The final big move by hedge funds was the shedding of more than $650 million worth of biotech firm Regeneron, the maker of Eylea, an eye drug for those with a loss of vision caused by macular degeneration. However, as with Baidu and Citigroup, the reason behind this sell-off likely wasn't poor performance, but rather the opposite.

From the end of June to September, shares of the company soared nearly 30%. Part of the reason behind the rise was the news that fellow biotech firm Sanofi would be upping its ownership stake from 20.5% to 22.5%. 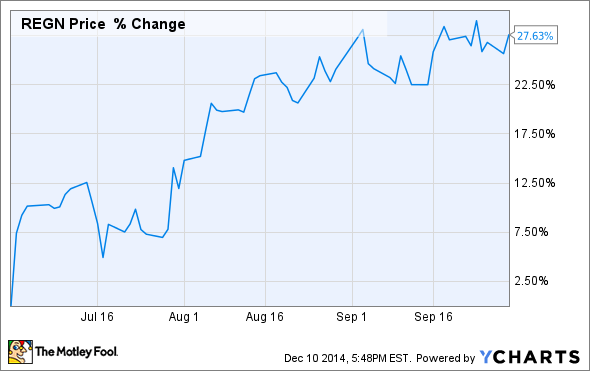 In addition, Regeneron received word from the FDA in July that it could begin marketing Eylea for another loss-of-vision condition known as diabetic macular edema.

So, at first glance, this once again seems to be a case where the hedge funds simply took their profits and ran. But this may not be the smartest move, because, as fellow Fool Leo Sun suggests, Regeneron could be poised to do great things in 2015 and beyond.