Honda Motor Co., Ltd. (NYSE:HMC) just released the 2015 version of its Civic Natural Gas, and by all accounts it's the most feature-filled and capable natural gas vehicle that Honda has ever sold in the United States. However, oil prices have fallen more than 30% since the peak in June, and Brent crude -- the global standard for pricing -- is now trading near $68 per barrel. Gasoline prices have also fallen, while natural gas wholesale prices have started to climb in the past several months: 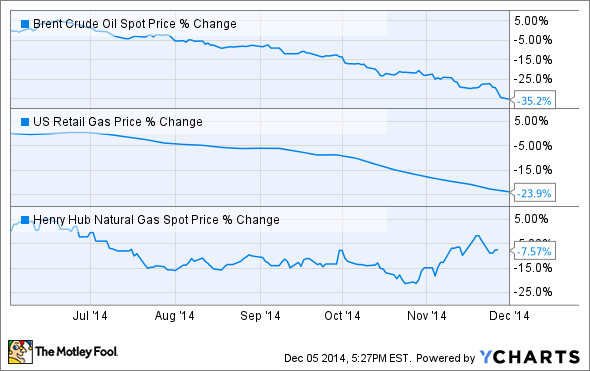 While the wholesale price of compressed natural gas doesn't tell the whole story about its cost "at the pump," the reality is, right now it's just not as much cheaper than gasoline as it was just a few months back. What does this mean for sales of the Honda Civic NGV, Ford Motor Company's (NYSE:F) Transit Connect CNG, and General Motors' (NYSE:GM) Chevrolet Impala CNG, which were made available in natural gas versions earlier this year? Let's take a closer look at what's happening right now.

The Chevy Impala CNG also runs on gasoline and has more than 500 miles of range. Source: Author.

Not a typical daily-driver vehicle, but ideal for fleets
While not a popular vehicle for consumers, the Civic NGV, Transit Connect CNG, and Impala CNG are ideal for fleet operators, especially municipal, utility, and public transit fleets with "return to base" operations. If the vehicles are kept overnight at a private location where they can refuel, the fleet operator can get the lowest possible fuel price, a major consideration when fuel is one of the biggest expenses these fleets face every year.

The average price for a gallon of gasoline in the U.S. fell to $2.88 per gallon on Dec. 1, and it threatens to fall even further. However, natural gas remains substantially cheaper, with a national average of $2.11 per GGE -- gasoline gallon equivalent -- according to CNGNow.com. That puts natural gas still about 24% cheaper than gasoline.

Price, feature difference for NGVs
CNG is still notably cheaper than gasoline, but the additional cost for the vehicles can run close to $10,000. Honda's CNG-powered Civic starts at around $26,000, versus just under $19,000 for the base sedan. Ford's Transit Connect starts at $24,710, while the CNG version is about $8,000 more, and only available through Ford's Qualified Vehicle Modifier program, with the actual CNG version converted by a third party, like Westport Innovations (NASDAQ:WPRT) through its WiNG program.

Chevy's Impala CNG starts at $38,000, while the base Impala is closer to $27,000. It's worth noting that the Impala CNG features a more powerful 3.6-liter V6, while the base Impala comes with a 2.5-liter four-cylinder engine. The Impala is also a bi-fuel vehicle, still retaining its gasoline fuel system as well as CNG tank, giving it a combined fuel range of more than 500 in-town miles, versus less than 250 for the Civic, with its 8 GGE fuel tank. The Ford Transit Connect comes with a 12 or 15 GGE tank, depending on the configuration, good for up to 300 miles of range or more.

Investing reality check
The reality is, none of these vehicles were expected to drive any kind of meaningful result for their makers back when oil was $100 per barrel, so any potential impact on sales won't matter much at all to Ford, Honda, or GM. However, Westport Innovations is certainly exposed to a narrowing in the gap between gasoline and natural gas prices.

For Westport, the bigger issue is economics in general. As much as the U.S. economy has improved, Westport still relies heavily on Europe, as well as Russia and China, for the bulk of its business. Will these markets return to growth? Frankly, it looks like it could take some time before that happens, and that could mean the current low-oil-price environment would last longer than expected. That's bad news for Westport, at least in the short term.

Looking ahead
Since none of these NGVs are especially important to the success of their manufacturers, it's highly unlikely that Ford, GM, or Honda will cut them loose anytime soon. Chances are, oil prices -- which means gasoline soon after -- will begin going back up. The reality is, very few of the oil companies -- and the OPEC countries -- can afford to see oil stay at the current prices for an extended amount of time.

That will shift the economics further back to the favor of natural gas. While it's not 100% clear how long this will take, there is some sign that it will probably be sooner rather than later. ConocoPhillips just announced that it is cutting capital spending for 2015 by 20%, and it's likely that we will hear more of the same from other large oil producers in coming weeks. However, it will take some time for these cuts to lead to a reduction in the market's oversupply, especially with OPEC having announced it will maintain current production levels for now.