The collapse of oil prices, its most dramatic since the financial crisis, continues with West Texas Intermediate hitting a five and a half year low of $56 per barrel on Wednesday. 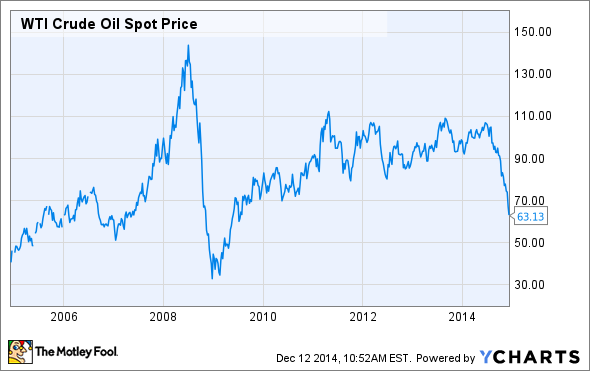 Plunging oil has caused unit prices of the largest American exploration and production master limited partnership in, Linn Energy (OTC:LINEQ), and its non-MLP equivalent LinnCo (NASDAQ: LNCO), to suffer cataclysmic declines of more than 60% over the last three months. The yield on this upstream MLP giant has soared to levels that can mean only one thing -- Wall Street expects an imminent dividend cut. 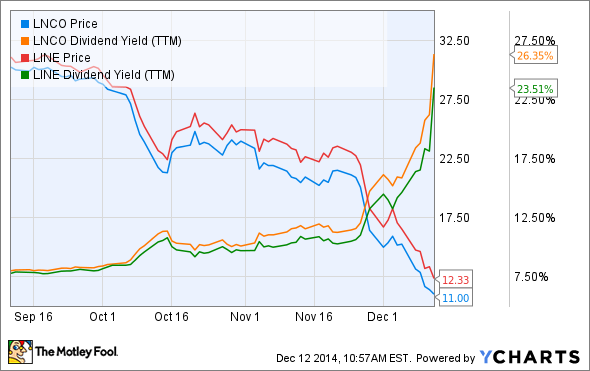 A month ago I wrote about why I thought Linn Energy's payout might survive with short-term oil at $80. Now, however, come dire predictions that threaten to blow apart that argument and gut Linn Energy's monthly dividend.

Could oil go to $43?
Abdullah bin Hamad al-Attiyah, the former senior advisor to OPEC member Qatar, has told the London Telegraph that the oil cartel is now "powerless" to control the price of oil.  Also, Andy Xie, formerly a senior economist for Morgan Stanley and the IMF, recently told CNBC that "Coal is down 60%, so eventually I expect oil to come down 60%, too."

In my opinion expecting oil to decline the same amount as coal, whose market operates under very different supply and demand conditions, is a bit of a reach and should be taken with a grain of salt. However that kind of prediction prediction can very much affect the short-term oil markets.

While the prospect of oil cratering from its June high of $108 per barrel to just $43 per barrel in the short to medium term is understandably worrying, what should really make energy investors sweat is Xie's assertion that "$60 would be the normal price for the next five years or so." What could cause oil to remain 45% off its recent high, possibly until 2020? Well, according to Xie, China has massively overinvested in industrial capital over the last 15 years and its economy must now "cool down to digest overinvestment." He said he expects this to put a long-term damper on commodity prices, especially oil.

What crude's continued decline means for Linn Energy
As impressive as Xie's resume might be, the simple fact is that no one can predict with certainty the global demand and supply tango that is the oil market. However, with statements such as Xie's, as well as those of the CEO of Kuwait's national oil company-- --that oil prices will remain at $65 until OPEC's next meeting on June 5-- continuing to crush the oil market, let's see what a world of $60 oil would do to Linn Energy.

Two factors are currently protecting Linn's dividend. The first is its recent trades and acquisitions that got rid of lots of high-production cost, fast-declining assets in exchange for lower-cost, slower-declining oil and gas fields. In its second-quarter conference call, management said it believed these deals would lower the company's yearly capital budget by $550 million-$650 million and generate a distributable cash flow, or DCF, surplus of $103 million in 2014.

That would have resulted in a distribution coverage ratio of 1.1 and firmly secured the payout. However, recent events seem to have proven management's earlier projections overly optimistic. In fact, management now projects a coverage ratio of just .83 for the current quarter, even after factoring out a $45 million one-time charge related to its most recent asset sales and a 64%-71% increase in production. 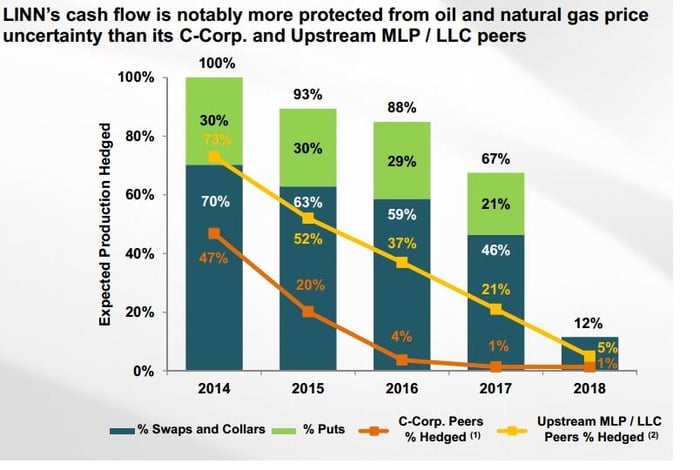 While those are attractive average prices, the problem is that Linn's cash flows are already falling short of covering its payout. Even with 93% and 88% of cash flows locked in through 2015 and 2016 respectively, the decline in oil prices is still likely to decrease DCF and likely to force the company to reduce its payout should oil not recover soon. How much would prices need to recover? Well, Linn Energy's nonhedged oil price assumptions for November and December were $80.54 per barrel, an assumption that the recent plunge in crude prices has shattered.

This creates the very real possibility that this quarter's coverage ratio will come short of even the earlier unsustainable coverage guidance of .83 and bodes very ill indeed for 2015 should oil prices fulfill Xie's earlier prediction that crude won't bottom until $43 per barrel.

What $60 oil over the long-run would mean for Linn Energy
If oil truly does keep falling and remains at this suppressed level for several years, then Linn Energy's earlier guidance for production growth and a sustainable payout at current levels needs to be thrown out the window. The simple fact is that hedging, which is currently protecting the MLP's cash flows, could become its enemy if oil prices remain this low for a long period of time.

That's because hedging works by locking in the current oil price for several years. While that was great when oil was at close to $100 per barrel for a long period of time, it will prove disastrous if oil remains at $60 for five years. Not only would it mean that Linn's DCF would contract enough to force a sharp cut in the payout, but it would also force the partnership to make a very hard choice.

The takeaway: Oil at $60 for an extended period would destroy the current payout but create long-term opportunity
Unless the oil market does an abrupt about-face and rallies sharply, current and prospective investors in Linn Energy need to accept that the MLP might have to cut its monthly payout sometime in 2015. While that might be painful, especially for investors who bought into the company in recent months at share prices near the high of $30, it also offers an immense long-term opportunity for new investors. That's because, even if Linn is forced to cut its payout by a third--a level I believe would result in a sustainable dividend and distribution--the yield would still be 17.8% at the present share price. In addition, news of that sharp a cut would likely cause Linn shares and units to decline further, meaning long-term investors who buy after such an announcement might be able to lock in a 20% yield that is sustainable -- even in a world of $60 oil.