Following the debacle of the Facebook (NASDAQ:FB) IPO, the biggest obstacle that microblogging site Twitter (NYSE:TWTR) had to overcome was making sure that it didn't give investors lousy returns right out of the opening gate when it first went public in late 2013. Twitter managed to accomplish that task, posting substantial gains in the months after its IPO. But the social-media company hasn't managed to keep up the pace in 2014, as its share price plunged more than 40% even as Facebook enjoyed unparalleled success at its end of the industry. Nervous investors point to Twitter's dubious user growth and wonder whether the stock can recover the ground it lost this year. Let's look at Twitter's 2014 with an eye toward evaluating whether the company will bounce back from this year's losses or continue to fall in 2015. 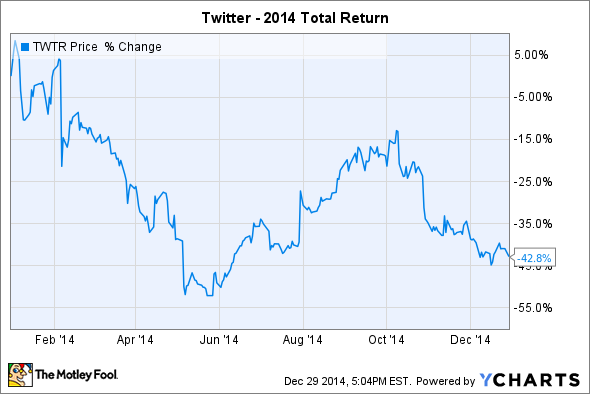 The biggest problem that Twitter has had lately is that its growth has slowed considerably. Many investors expected Twitter to be an earlier-stage version of Facebook, allowing them to tap into a hoped-for rising tide of users as the service became more popular. Yet throughout 2014, Twitter has seen its monthly average user counts come in below the pace that investors wanted to see, with the latest figures from the most recent quarter weighing in at 284 million -- just 13 million more than in the previous quarter and 52 million from the previous year's quarter. At roughly 22% to 23% annual growth, that number isn't terrible, but it suggests that Twitter will peak well below Facebook's figure of more than 1.3 billion active users worldwide.

Admittedly, active users aren't the only source of potential revenue for Twitter. CEO Dick Costolo recently estimated that around half a billion people visit Twitter each month but never log in, either because they don't have an account or because they don't need it in order to see the limited content they use. Twitter believes that it can generate some revenue from these more infrequent users, with the company's CFO claiming that they could help the company bring in $1.3 billion annually in extra sales. Yet investors remain skeptical that the company can squeeze too much value from users who don't even care enough about Twitter to leave themselves logged in on a permanent basis. Moreover, even Twitter's active users aren't as active in their use as those at Facebook.

Bullish investors believe that Twitter still has a number of competitive advantages over Facebook and other social-media rivals. Even if Twitter's audience is smaller, company executives argue that the company knows more about its users because of their expressed interest in who they follow and what topics they like to discuss. That in turn could allow Twitter to charge more for advertising than Facebook, as long as Twitter can deliver groups of committed enthusiasts to would-be advertisers and demonstrate higher levels of click-through conversion than those advertisers are likely to get on rival sites.

Already, Twitter has seen some evidence of this shift taking place. A recent survey found that more than half of Twitter users over age 13 rely on promotions they saw on the microblogging site as part of their decision-making process. That's up dramatically from results of a similar survey in 2013 and hopefully points the way toward Twitter's increased presence in the marketing world.

Still, many institutional investors don't have much confidence in Twitter's future. Last month, Standard & Poor's gave Twitter a bond rating below investment grade, forcing the social-media company to pay higher rates to junk bond investors to buy its debt. Twitter needs to find ways to keep growing, either through internal investment or buy acquiring other companies, and so access to capital will remain important. Having to pay up for that access will drain capital and means fewer dollars going toward productive improvements to Twitter's service.

This has been a disastrous year for Twitter investors, and it's uncertain what the social-media up-and-comer can do to bolster its business and restore confidence among its shareholders. Without a new strategy aimed at accelerating not only growth in user numbers but also the level of engagement its users have with the service, Twitter could remain under pressure throughout 2015 and beyond.

Twitter Plunged 43% in 2014, but Can It Recover? @themotleyfool #stocks $FB $TWTR Next Article
Current