Please ensure Javascript is enabled for purposes of website accessibility
Log In Help Join The Motley Fool
Free Article Join Over 1 Million Premium Members And Get More In-Depth Stock Guidance and Research
By Travis Hoium - Jan 31, 2015 at 9:00AM

Solar stocks are down because of the drop in oil, but that doesn't mean the industry is in trouble.

There's no question that solar stocks have been selling off along with oil prices over the past six months. The question is, why?

Oil and solar energy rarely compete head to head, because oil is primarily a transportation fuel, while solar energy creates electricity. A better comparison for solar energy would be natural gas or coal, but even they're not great comparisons because there are a lot of costs that go into running a natural gas or coal power plant beyond just fuel costs. Here's why the solar industry is ready for explosive growth despite falling energy prices in the rest of the industry.

Solar energy has no good fossil fuel comparison
As I mentioned, natural gas and coal are really the two fossil fuels that are competitive with solar energy, but even they don't make a very good direct comparison. That's because the cost of natural gas or coal fuel is just a fraction of the cost of creating electricity from these energy sources. Power plants have to be built, workers have to be paid, and maintenance has to be performed to keep these plants operational. 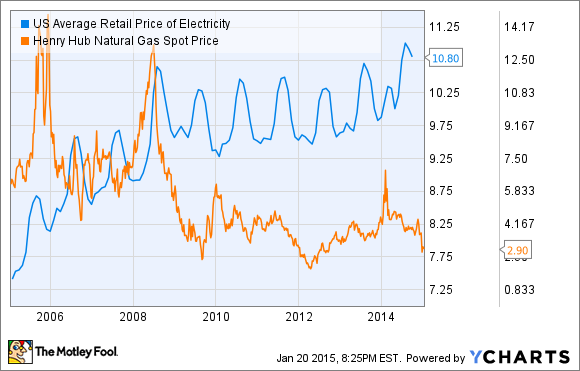 US Average Retail Price of Electricity data by YCharts.

Comparisons to coal are even more difficult because the coal power plant fleet is aging and being shut down across the country (largely because of low natural gas prices). Plus, comparing the cost of a 40-year-old coal plant on its last leg to a brand-new solar power plant isn't a valid comparison anyway. So, coal doesn't really provide a direct comparison to solar energy either.

Oil isn't a good comparison because it's rarely used to generate electricity, but where it is, energy costs are extremely high, and solar makes a great alternative. Hawaii is the only state that generates a significant percentage of its electricity from oil, and there, consumers are paying $0.33 per kW-hr on average, compared to $0.104 nationwide.

Lazard sums up the comparison between solar energy and fossil fuels well in the annual Leveled Cost of Energy Analysis. The chart below lays out the cost per MW-hr to build different energy sources and how sensitive those sources are to fuel prices. 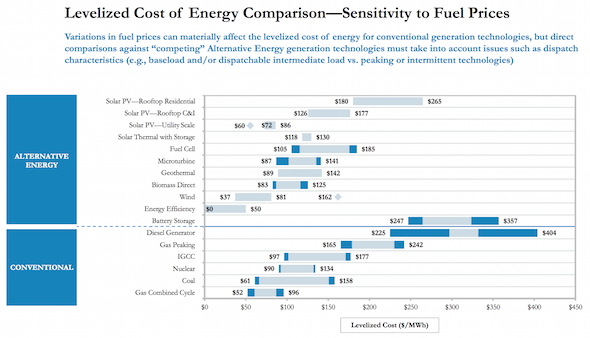 You can see that unsubsidized utility scale solar is still cheaper than diesel, gas peaking, nuclear, and most coal generators. Only natural gas combined cycle is competitive, but even that may be changing.

Solar costs are low and still falling
Meanwhile, solar energy costs are now as low as $0.06 per kW-hr based on a recent project bid in Dubai, and costs are dropping like a rock. You can see below that since the beginning of 2010, the cost of utility-scale solar has dropped 61%, and residential solar costs are down 48%, according to GTM Research. 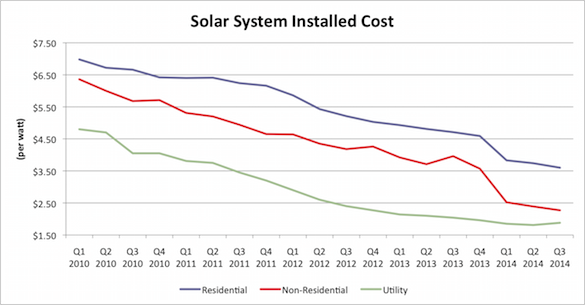 Falling costs will help drive installation growth because whether a solar project is going up on your roof or in a desert in the Southwestern U.S., it's being compared to grid prices, not oil or even natural gas prices.

Investors are getting a massive discount in solar
Falling stock prices mean solar stocks are trading at a much better value than they were six months ago. Below, I've included a chart of P/E ratios for some of the better stocks in the industry. The P/E ratio doesn't tell the whole story for a company like SunPower (SPWR 7.63%), who is building 100 MW per quarter on its balance sheet instead of selling projects, but it's one measure of value. 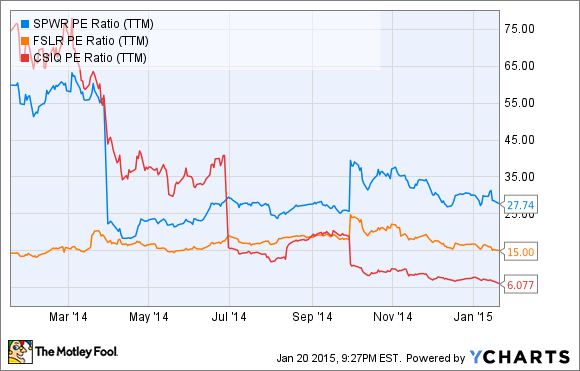 All three companies are well positioned for future solar growth. First Solar (FSLR 5.04%) is one of the largest utility scale solar builders in the world and has recently launched a high efficiency product that could bring it into commercial and residential solar. The company also has a long history of profitability, which is rare in solar.

Canadian Solar (CSIQ 5.19%) was one of the first Chinese manufacturers to expand from selling panels into building large solar systems, making windfall profits on Canadian projects in the past year. The diversity it has built in end markets should allow profits to grow along with the industry.

SunPower is the most diversified company in the industry with exposure to nearly every solar market. With a large lead in efficiency, it should remain a big player in solar for decades to come.

Given the fact that the solar industry is just starting to tap its multitrillion-dollar potential, I think now is the time for investors looking at the industry to get in. Low oil prices have beaten up solar stocks despite the fact that they have nothing to do with the industry, and that's a gift markets are giving to investors right now.

Travis Hoium owns shares of SunPower. The Motley Fool has no position in any of the stocks mentioned. Try any of our Foolish newsletter services free for 30 days. We Fools may not all hold the same opinions, but we all believe that considering a diverse range of insights makes us better investors. The Motley Fool has a disclosure policy.