Ford is working hard to diversify its operations around the world. But right now, Ford's F-Series pickups are still pulling a lot of weight when it comes to the Blue Oval's bottom line. Source: Ford Motor Company.

Is Ford Motor Company's (NYSE:F) stock headed for a fall?

Ford's stock has had a terrific run since the dark days of early 2009, when it was trading for less than $2 a share. It just announced results for its 22nd consecutive profitable quarter, and its stock is sitting comfortably around $15.

But every run comes to an end, sooner or later. Or put another way, every company faces risks that could knock its business off course.

To be clear, I'm not saying it's time to sell your Ford shares -- at least, not yet. But if you're a Ford investor, or someone whose business depends on the company, it's worth keeping a close eye on the things most likely to hurt the company's bottom line -- and its share price. Here are three that could come into play over the next several months.

Risk one: When the U.S. starts to turn sour, so will Ford's stock
The chart below shows how the 2014 pre-tax income for each of Ford's regions stacks up: 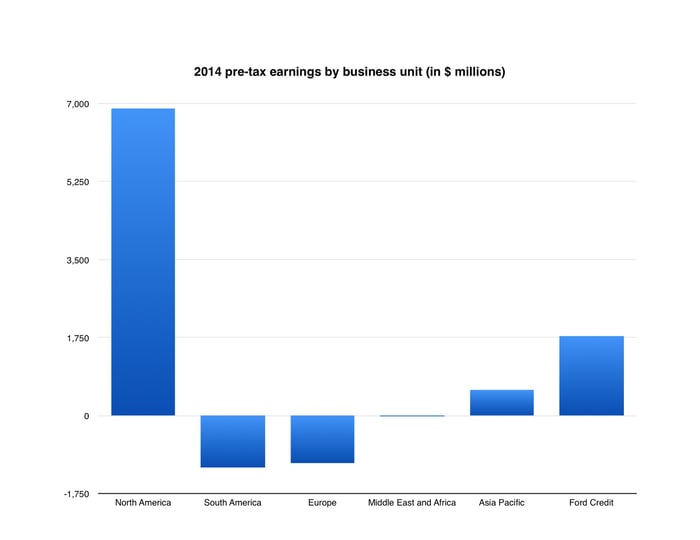 As you can see, it isn't close -- North America still rules the roost. And its lead is even greater than it might appear, as much of Ford Credit's business comes from the U.S., too.

Here's what that means: For all of Ford's efforts to expand in Asia and restructure in Europe, as of right now, it's still very dependent on North America -- specifically, on the United States.

We can refine it even further: Ford is extremely dependent on its best-selling and most profitable product line, the F-Series pickups, which drive the bulk of its profits in North America.

Now, to be fair, Ford's management is working hard to diversify its regional portfolio. Its operations in Asia should be much more profitable in a year or two, and Europe is currently expected to return to profitability next year.

But until then, and maybe for a while after, Ford is very vulnerable to anything that hurts new-car sales in the U.S. -- and especially anything that would hurt its pickup sales.

Sooner or later, there will be an economic downturn in the U.S. When that happens, Ford's profits will shrink -- and so, most likely, will its stock price.

Risk two: Europe could get worse instead of better
For several quarters, Ford's guidance was rock-solid: Our aggressive restructuring plan for Europe is working. We'll turn a profit in Europe in 2015.

That guidance was a big part of the bullish case for Ford's stock. Ford Europe lost $1.75 billion in 2012 and another $1.6 billion in 2013. If Ford simply broke even in Europe in 2015, that would be a big addition to its bottom line after a couple of years of 10-digit losses.

But that isn't happening. Disruptions in Russia, where Ford had made big investments in future growth, together with the continuing recalcitrance of key European economies, led Ford to revise that guidance downward in September: A $250 million loss is likely in 2015, they said. But we'll be profitable in 2016.

Investors were not pleased. That news sent Ford's stock on a 7% one-day plunge. Ford executives revised that guidance downward again last week: Now they're not willing to cap losses at $250 million, they're only willing to say that Europe's 2015 results will be better than 2014's.

Last week's drop in Europe guidance didn't dent Ford's stock significantly, because Ford improved its guidance for other regions at the same time. But if Ford has to drop its guidance for 2015 again, or -- worse -- push that long-awaited day of profitability out beyond 2016... look out below.

Risk three: Ford South America could lose more than expected
South America was an unpleasant surprise for Ford investors in 2014. In recent years, the region has run near break-even, not having a big effect on Ford's earnings either way. That changed in 2014, when Ford South America posted a full-year loss of $1.16 billion.

There are a few big challenges facing Ford in South America. First, currency controls and other actions in Venezuela have made it essentially impossible for Ford to pay its suppliers and dealers in the country. That has brought sales to a standstill, and led Ford to make changes in the way it carries its Venezuelan operation for accounting purposes. The upshot: An $800 million charge.

But that isn't the only challenge facing Ford in South America. Economic conditions in several big markets are slipping, and inflation is becoming a challenge in the key markets of Brazil and Argentina. Ford has offset some of its losses by keeping its pricing strong, but its local costs are up, and it lost over $200 million on exchange-rate moves in the fourth quarter.

Ford says it will lose money in South America again in 2015, but results should be "substantially improved," CEO Mark Fields said last week. Ford's guidance is usually pretty solid, but this is one area where local developments have confounded their expectations in the recent past. If that happens again, Ford's stock could get an unhappy haircut.