Please ensure Javascript is enabled for purposes of website accessibility
Log In Help Join The Motley Fool
Free Article Join Over 1 Million Premium Members And Get More In-Depth Stock Guidance and Research
By Adam Levy - Feb 15, 2015 at 7:23AM

These telcos have some big expenses coming up, and the debt market is just about tapped out for them.

Both companies spent heavily in the FCC's AWS-3 spectrum auction, acquiring valuable airwave licenses for their wireless businesses. With both companies heavily burdened with debt, they're both looking to raise funds without increasing their liabilities. After the AWS-3 auction results were announced, S&P downgraded AT&T's credit rating to a BBB+. Verizon's credit rating remained unaffected.

A look at the debt situation
Both AT&T and Verizon's debt has risen significantly over the past three years. 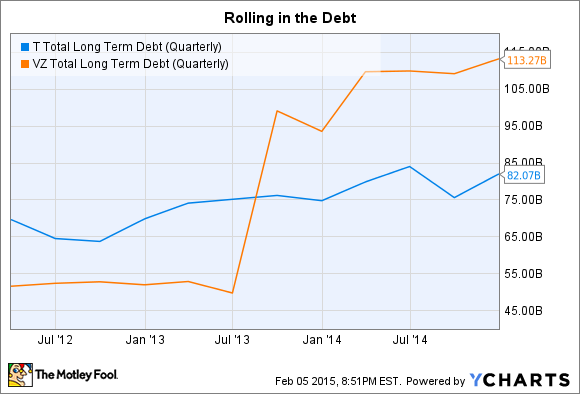 Most notably, Verizon raised $49 billion in debt to help pay for its acquisition of Vodafone's 45% stake in their Verizon Wireless joint venture. The company closed the acquisition about a year ago for $130 billion. Meanwhile, AT&T has slowly increased its debt load, taking advantage of low interest rates.

However, 2014 saw margin pressure on the entire wireless industry, and Verizon and AT&T were not immune. As a result, gross margins declined, putting pressure on operating cash flow. AT&T's cash flow from operations fell 10% in 2014 and Verizon's fell 21%.

With both companies heavily investing in building out their wireless network, neither one has much cash flow left every quarter after paying out their dividends. With the billions of dollars due to the FCC, neither company is in a strong position to take on more debt to finance those payments. Simply put, selling assets is the best strategic move they can make.

What exactly are they selling?
Frontier is buying some of Verizon's wireline assets in California, Florida, and Texas. This is the third time Frontier has purchased wireline assets from Verizon, but it's by far its biggest acquisition yet. Frontier is working to expand its fiber-to-the-home video service, and Verizon's existing FiOS infrastructure will help accelerate the process.

Verizon will now concentrate more heavily on the mid-Atlantic region, where it still has 16.1 million voice and 7 million high-speed Internet customers. However, Verizon's wireline business isn't as profitable as its wireless business.

Verizon is also selling 165 towers to American Tower and leasing the rights to 11,324 towers for a little over $5 billion. After the 28-year lease, American Tower will have the right to buy the towers. AT&T made a similar deal with Crown Castle in 2013.

Meanwhile, AT&T is reportedly looking to sell data centers valued at $2 billion. Not many details have been released about the exact properties AT&T is looking to sell, but it shows AT&T's willingness to continue selling off pieces connected to its wireline business to support its wireless business.

Show me the money
Clearly AT&T and Verizon aren't afraid to liquidate their assets when they feel it's necessary. With a commitment to continually raising dividends, neither company is going to sacrifice its investors' interests for additional leverage.

Verizon's newly announced sales will eventually provide the cash necessary to cover its $10.4 billion spectrum purchase as well as a $5 billion stock buyback. The latter will also reduce its total dividend payout.

AT&T is on the line for $18.2 billion and has agreed to buy DirecTV for $48.5 billion in a combination of cash and equity. However, the company only raised around $12 billion from asset sales over the last couple years to spend on the AWS-3 spectrum. AT&T is still a few billion short, so look for additional asset sales in the near future.

Adam Levy has no position in any stocks mentioned. The Motley Fool recommends American Tower, Verizon Communications, and Vodafone. The Motley Fool owns shares of American Tower and has the following options: long January 2017 $80 calls on American Tower. Try any of our Foolish newsletter services free for 30 days. We Fools may not all hold the same opinions, but we all believe that considering a diverse range of insights makes us better investors. The Motley Fool has a disclosure policy.