Hedge fund manager Bill Ackman continues to battle with Herbalife (NYSE: HLF). At a conference on Monday, the activist investor said that top executives at the multi-level marketer are looking to hire criminal defense attorneys. If true, it would be a major development for the company, and for Ackman's campaign, lending significant legitimacy to his long-held belief that government regulators could ultimately intervene to shut down Herbalife.

Ackman's allegations
According to Reuters, Ackman, speaking at the 13D Monitor Active Passive Investor Summit, said that Herbalife executives "have been or are looking to hire criminal defense council." He offered no specific proof for his claims, but said he was given this information by a reliable source.

Ackman has made many allegations against the company and its management, but this could be one of the most significant. If Herbalife's executives are, as Ackman claims, lawyering up, it suggests they fear criminal prosecution.

U.S. law allows the operation of legitimate multi-level marketing companies, but pyramid schemes are illegal -- and operating them is a criminal offense. Since December 2012, Ackman has vigorously argued that Herbalife is a pyramid scheme. If Ackman is right, and the government agrees with his claims, it's possible Herbalife's executive team and many of its top distributors would face criminal charges.

The Federal Trade Commission and several state attorneys general are investigating the company. Various reports have indicated that the FBI is also looking into Herbalife's practices, though management maintains it has no knowledge of any FBI investigation.

If the FBI is looking to bring criminal charges against Herbalife's management, it could be in conjunction with an FTC injunction. The FTC is the primary regulator of pyramid schemes, and it has used its injunctive power alongside other regulatory agencies to seize the assets of companies suspected of operating pyramid schemes in the past, including, most recently, Fortune Hi-Tech Marketing.

Even if they accept a plea bargain, or are ultimately exonerated, such charges would likely spell doom for Herbalife shareholders, as both investor and distributor confidence would be ripped to shreds overnight. A headline declaring "Herbalife Executive Arrested on Charges of Operating an Illegal Pyramid Scheme" would be met with -- to put it mildly -- significant selling pressure.

Herbalife denies Ackman's claims
But Herbalife responded almost immediately to Ackman's latest allegation, writing, "there is simply no truth to Bill Ackman's statements, and this is just another stunt [...] to drive down [Herbalife's] stock price" in a press release late on Monday.

Herbalife has long maintained its innocence, consistently arguing that it's a legitimate company facing an unprecedented attack by a motivated short-seller.

Certainly, Ackman's allegations have had a noted effect on Herbalife's share price, and possibly its core business. Herbalife shares plunged following Ackman's initial presentation and have dipped on subsequent allegations.

Herbalife's business has taken a turn for the worse in recent quarters, as its growth has stalled. Its network of direct sellers need to feel confident in the business, and if Ackman has been successful in sowing the seeds of doubt, many may have become discouraged. 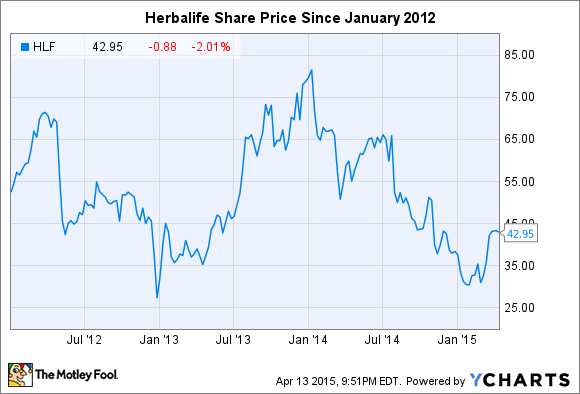 Yet despite their insistence that his claims are baseless, Herbalife's management has not sued Ackman for defamation. Such a case would open Herbalife up to Ackman's lawyers, who might be able to use subpoenas to dig up additional information on the company.

Herbalife remains a dangerous investment
I have consistently maintained that Herbalife is a poor investment. If Ackman is ultimately proven right, shares could literally go to zero almost overnight. Of course, outright shorting it may be just as dangerous -- If Ackman is wrong, shares of Herbalife could be poised to surge.

Either way, it's a risky proposition likely unsuitable for most investors.