Around a year ago I looked at some stocks I'd hate to buy, including Euronet Worldwide Inc (NASDAQ:EEFT)and Herbalife (NYSE:HLF). These stocks have had different fortunes since then -- Herbalife has massively outperformed the market, while Euronet has significantly underperformed. I happen to think both are still unattractive companies, and here's why. 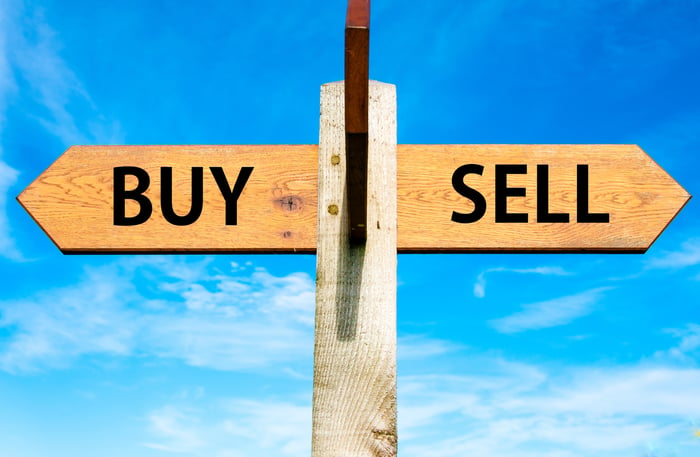 Global electronic payment provider and transaction processing company Euronet has a problem. Many people and consumer groups think one of its most important services doesn't deliver any value to consumers and consequently its facing regulatory action by the European Commission.

Unfortunately, the service in question, namely its Dynamic Currency Conversion (DCC) makes up a significant part of its most important segment's (EFT Processing) operations. As you can see below, the ETF Processing contributed the overwhelming majority of profit growth in 2017.

Euronet doesn't break out its DCC-derived earnings, but on its recent earnings call Brown disclosed that revenue from DCC "barely crosses the double-digit threshold as a percent of our consolidated revenue," and "the operating margins from DCC are only slightly better than the overall operating margins for the entire segment."

Based on yearly revenue of $2.25 billion and EFT processing (the segment where DCC resides) operating margin of 25.7%, my back-of-the-envelope calculations suggest around $58 million of operating income in 2017 came from DCC -- representing 19% of segment operating profit and 22% of overall operating profit. Whichever way you cut it, DCC matters to Euronet.

DCC is a service that lets you withdraw cash from an ATM or make a payment via a point-of-sale (POS) terminal in a country with a currency other than the home currency of your bank account. With DCC, the currency conversion is made at a known rate by the operator (i.e. Euronet) rather than by your home bank at an unknown rate.

The benefit of selecting the DCC option, when prompted at an ATM or a POS terminal, is that the consumer gets to see the rate at which the exchange is made. However, that's not good if the overall cost of the DCC transaction is consistently more than it would be if you simply let your home bank do it by selecting the local currency option at the unknown rate.

Unfortunately, there's plenty of evidence to suggest consumers are better off by simply avoiding DCC altogether.

Regulators and consumer groups are pushing back on DCC

DCC may well be a cash cow for Euronet and is merchant partners, but that doesn't mean it is a worthwhile service for consumers. Indeed, a position paper from a highly regarded consumer organization, the Bureau Europeen Des Unions De Consammateurs (BEUC) is critical of DCC and cites one study claiming 99.7% of consumers are worse off for choosing it.

Furthermore, choosing the DCC option is "almost always" to the detriment of consumers in terms of costing them more money in their home currency, according to the BEUC paper.

The paper concludes by claiming, "All bodies dealing with consumer issues are unanimous: consumers should never accept DCC," and says, "there is no practical solution to improve the current situation. Therefore, we call for a simple ban of this commercial practice."

In addition, a working document of the European Commission puts it: "it is very difficult for consumers to know which currency conversion offer is the most advantageous, and there are numerous examples of consumers being oriented toward a more costly currency conversion option at the point of sale or when using an ATM."

The threat to Euronet

The criticisms of DCC have not gone unheeded and the European Commission is reviewing it and might take action as part of its consumer financial services action plan. The Commision is set to make proposals to the European Parliament and Council by the end of the first half of 2018.

He may well feel that way, but that doesn't mean the European Commission won't simply go ahead and try to ban or regulate it in a way that significantly impacts profitability at Euronet.

All told, it's difficult to know what proposals the European Commission will put forward, but it's a significant risk for investors to consider and one that makes the stock worth avoiding in my view.

It's widely reported that billionaire investor Bill Ackman has now exited his short position in multi-level marketing (MLM) nutritional supplement company Herbalife, although Bloomberg reports that he still owns put options. The news will come as a pleasant surprise to bulls in the stock, including Carl Icahn, but that doesn't mean Herbalife is a good investment.

In fact, based on several key metrics the company's performance is lackluster at best, but that's not how management portrays it. First, let's examine the glass half full viewpoint.

Moreover, Herbalife guided toward volume point growth of 2%-6% in 2018. According to Herbalife SEC filings, volume points "are used by management as a proxy for sales trends because in general, excluding the impact of price changes, an increase in volume points in a particular geographic region or country indicates an increase in our local currency net sale."

The bullish case sees Herbalife's sales and volume points improving after a year in which Herbalife was forced to restructure its operations following a Federal Trade Commission (FTC) order.

Unfortunately, a deeper dive suggests all is not well at Herbalife. I have three metrics to look at.

Second, forget about the impact of the FTC order, because non-North America volume points fell in 2017 as well. This isn't just about the FTC -- Herbalife's global performance has been weak too.

One thing worth considering with MLM companies is that volume points and sales growth tends to induce distributors to be more active, but declines are likely to demotivate them -- the last thing Herbalife needs is to lose distributors or see a decline in their activity.

Third, the company's debt-to-asset ratio continues to rise even as its return on invested capital (ROIC) remains in a downtrend -- not a good sign. A declining ROIC along with rising debt-to-assets implies Herbalife will have problems paying is debt in the future. It's not a sustainable trend. 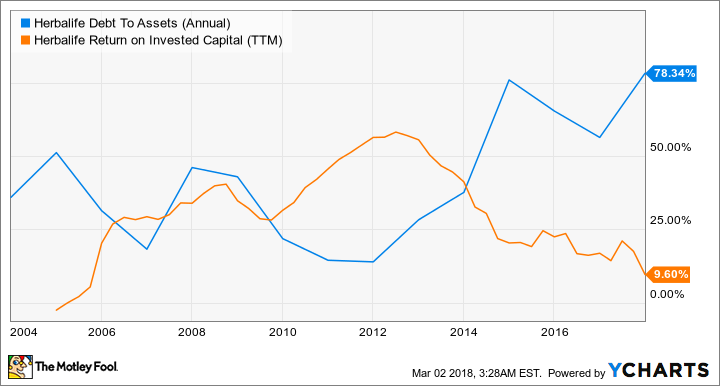 Euronet has a potentially damaging event coming up in terms of the European Commission's action against DCC and that's enough to make the stock worth avoiding in my view. Ultimately, a company will live or die by its usefulness to its customers and if DCC isn't offering value to consumers then the service will not be sustainable in the long-term in my view.

Meanwhile, Herbalife does not look like a business with strong underlying growth prospects. If the company can't grow volume points/sales then it runs the risk of losing active sales managers-- the lifeblood of the business. It's a self-perpetuating downcycle and until Herbalife can demonstrate sustainable volume point growth it's worth staying away from.