In the world of hated companies, Comcast (NASDAQ:CMCSA) and Time Warner Cable (NYSE: TWC) occupy rare air. In an industry that already ranks low, these two companies sit at the bottom -- the worst of the worst.

Both of these cable giants -- which are attempting to merge into one $45 billion highly disliked entity -- have had such a range of public-relations disasters that they've become a punchline. Whether they're changing customers' names on bills to derogatory terms or harassing subscribers who attempt to cancel service, Comcast and Time Warner Cable have a long list of transgressions.

Subscription television ranks one up from the bottom of the American Customer Satisfaction Index (ahead of only Internet service providers, which are all the same companies), and Comcast and Time Warner Cable are the lowest-rated pay TV providers.

"These industries, which include many of the same companies, are the worst performing among 43 tracked by the ACSI," according to the an ACSI press release.

Comcast and Time Warner Cable have the most dissatisfied customers, according to the survey. Comcast fell 5% to 60, while Time Warner Cable registered the biggest loss and plunges 7% to 56, its lowest score to date.

"Comcast and Time Warner assert their proposed merger will not reduce competition because there is little overlap in their service territories," says David VanAmburg, ACSI Director. "Still, it's a concern whenever two poor-performing service providers combine operations. ACSI data consistently show that mergers in service industries usually result in lower customer satisfaction, at least in the short term. It's hard to see how combining two negatives will be a positive for consumers." 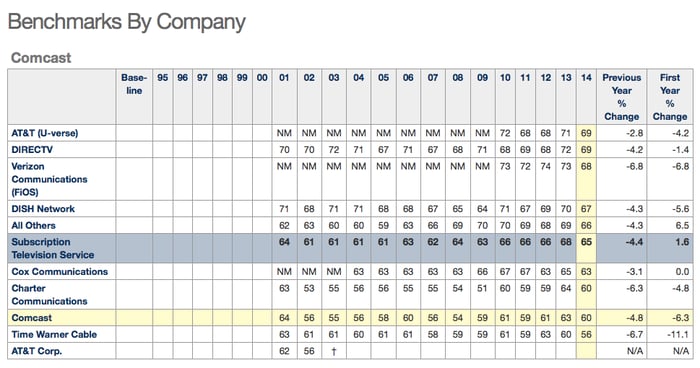 Comcast and Time Warner Cable sit at the bottom of the 2014 rankings. Source: ACSI.

Comcast is trying to improve
While Time Warner Cable has done little to address its customer-service woes -- probably because it's being absorbed in the "merger" -- Comcast has taken aggressive steps to fix its problems. The company has appointed Charlie Herrin, a well-respected, long-tenured executive, to lead that effort.

Herrin has been in the job for less than a year, but he has said and done the right things so far. He also acknowledged in an open letter to customers how far the company has to go:

The culture of a company is the collective habits of its people -- we have great people at Comcast and we need to treat customers with the respect they deserve. Respect is not just how we speak with customers, but also respect for their time and making it much easier for them to interact with us ... whether it's solving a problem, ordering service or simply asking a question.

We're working hard to transform the customer experience and all of our employees play an important role in making that happen. We'll take every opportunity to learn from our mistakes and fix issues to make their experience better.

In his short time on the job, Herrin has shown a willingness to make changes. This attitude has included releasing an app that allows customers to track the progress of service people, eliminating that four-hour appointment window and making things easier for subscribers.

It's a small measure, but it's a sign that the customer-service boss understands how to make people happy.

It's a long road
Despite these improvements, Comcast still has a long way to go, and many are still unsure as to whether the company should be allowed to merge with Time Warner Cable. If that deal goes through, at least the list of hated companies will grow shorter, but that will be little comfort to the people subjected to using the combined cable giant.

There are signs -- at least from the Comcast side -- that change is possible. That could mean that should the merger be approved, customers will get to deal with a kinder, gentler megacorporation. Both these companies are hated for good reason, but, it's possible that their unification is coming at a time when Comcast is improving and becoming a little more likeable.