Berkshire Hathaway (NYSE:BRK.A) (NYSE:BRK.B) recently announced the current state of its stock portfolio in a regulatory filing, and it showed that the company added significantly to its holdings of Wells Fargo (NYSE:WFC) and US Bancorp (NYSE:USB). Why does Warren Buffett love these banks so much, and is now a good time to buy?

Berkshire's portfolio: no huge surprises in the first quarter

There weren't any major surprises to be found in Berkshire's latest regulatory filing. No new stocks were added to the portfolio, and the overall value contracted slightly from $109.4 billion to $107.1 billion, due to a combination of more stocks sold than bought as well as so-so market performance for many of Berkshire's stocks during the quarter.

Although Berkshire didn't add any new positions, it did buy more shares to add to some of its existing investments. The company bought more shares of Wells, US Bancorp, Deere, Liberty Global, Phillips 66, Precision Castparts, and Twenty-First Century Fox, and sold some of its shares of Bank of New York Mellon, Charter Communications, National Oilwell Varco, Viacom, and Wabco Holdings.

Why Wells Fargo and US Bancorp?
During the first quarter, Berkshire increased its stake in Wells Fargo by about 2% to 470.3 million shares, which represents a 9.2% stake in the banking giant. And, the US Bancorp stake grew by 5% to 83.8 million shares, roughly a 4.6% stake. So, why did Berkshire buy shares of these banks, and not say, Citigroup, which many people consider to be "cheap"?

Let's start with Wells Fargo. Buffett first invested in the bank all the way back in 1989 and has consistently added to his holdings over the years. In Berkshire's 1989 letter to shareholders, Buffett wrote, "we look for first-class businesses accompanied by first-class managements," and more recently, Buffett has referred to Wells Fargo as his favorite bank. In fact, Wells Fargo became Berkshire's largest stock investment in 2012.

In short, Buffett loves Wells Fargo's culture and management, as well as its focus on consumer banking. Throughout its history, the bank has maintained stronger capital levels and larger reserves than most of its peers, which is apparent when you look at how the bank performs during the tough times. In fact, during the financial crisis in 2008 and 2009, Wells was better capitalized than its peers, and had fewer risky assets on its balance sheet – allowing the bank to quickly overcome any crisis-related problems and even take advantage of the situation in several ways (such as acquiring Wachovia cheaply).

He also likes Wells Fargo as a great play on the housing recovery. After all, the nation's largest mortgage lender certainly stands to benefit as the housing market improves, right? Plus, with interest rates expected to begin rising later this year, Wells Fargo could also see profits rise as mortgage rates increase and spreads potentially widen. Buffett has even gone so far as to say Wells should continue to expand its mortgage business even further than it already has, calling the mortgage business a "sensational" opportunity for the bank.

US Bancorp has a lot of the same things going for it, with a history of high-quality assets and strong capitalization, as well as a culture of risk management and responsible lending. Plus, US Bancorp is consistently among the most efficient and profitable banks in the market, with ROA, ROE, efficiency ratios, and profit margins that are among the best in the industry.

Furthermore, US Bancorp is growing at a rather impressive pace, with year-over-year deposit growth of 8.1% and loan growth of 5.1%, while experiencing an 18.2% decline in net charge-offs.

Finally, when it comes to US Bancorp (and Wells Fargo for that matter), the numbers speak for themselves. Just look at how the banks compare with peers in terms of profitability, efficiency, and asset quality.

Wells Fargo and US Bancorp vs. other large U.S. Banks | Create infographics

Is now a good time to buy? (Hint: it's a trick question)
Although these banks command a significantly higher valuation than their peers, that doesn't necessarily make them expensive. Wells Fargo and US Bancorp have earned their valuations by building a culture of responsible management, strong capital levels, and smart business practices. 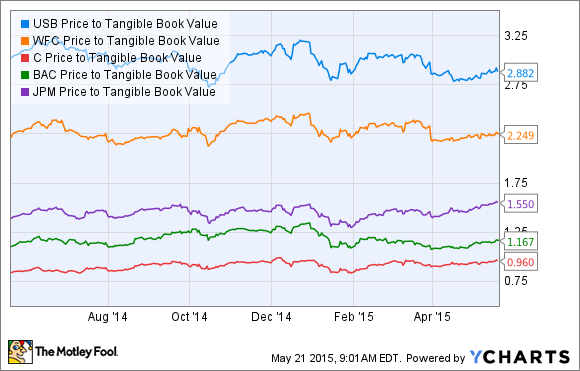 As Warren Buffett has said many times throughout his career, it's better to buy a great business at a fair price than a fair business at a cheap price, which is the reason Buffett continues to buy these banks and not "cheap" banks like Citigroup or Bank of America (he does own warrants in Bank of America, but that's another story).

The reason I say this is a trick question is because it's always a good time to buy great businesses like these banks. If you employ a Buffett-like strategy of accumulating a position over time at various price points, you'll end up a winner in the long run.