There's a lot to love looking at Fitbit's (NYSE:FIT) financials.

The company registered year-over-year revenue growth of 175% in 2014 while posting a profit of $131 million. The company was responsible for 85% of the U.S. connected activity tracker market in Q1. Even globally, the company is the market leader, with a 34% market share by shipment volume, according to International Data Corp.

Fitbit's numbers are gaudy for sure, and that's why it's been a market darling since it began trading last month -- people are bullish on fitness trackers and the company owns the category.

The situation reminded me of a research note from Standard and Poor's I read a little while back:

"We think the ________ market is poised for mass consumer adoption, and believe ________ as a market leader, is in a prime position to capitalize on the upswing."

I should've clarified, that note wasn't about Fitbit and the nascent wearable consumer tech market. It was from a bullish 2006 research paper covering Garmin (NASDAQ:GRMN) and the then-burgeoning GPS market.

This was in June of that year, when the company had a market cap of approximately $10.5B and manufactured roughly half of the GPS devices sold in the U.S.

But that same bullish paper from S&P had a note under a section titled "Ability to Change Direction:"

GPS-enabled smartphones had been available since the early 2000s, but few took the threat seriously. At the time, analysts swooned over the GPS market's triple digit year over year growth. Jim Cramer called Garmin "the most fabulous company I have ever followed."

A year later, Apple (NASDAQ:AAPL) released the first iPhone on June 29, 2007 -- while there were already smartphones on the market, the device's larger display and touch capabilities revolutionized app functionality and user experience. The Garmin bulls were mostly unfazed, after all, for every iPhone sold in the second half of 2007, Garmin sold nearly six GPS devices. By fall of 2007, Garmin's market cap had more than doubled, reaching heights of roughly $27B. In November of that year, Google updated its Maps app to mimic GPS functionality.

Garmin wouldn't feel the much of an impact until early 2008 after the updated Google Maps was out of beta and other early GPS app developers, like Navizon, released free versions of their apps for the iPhone. 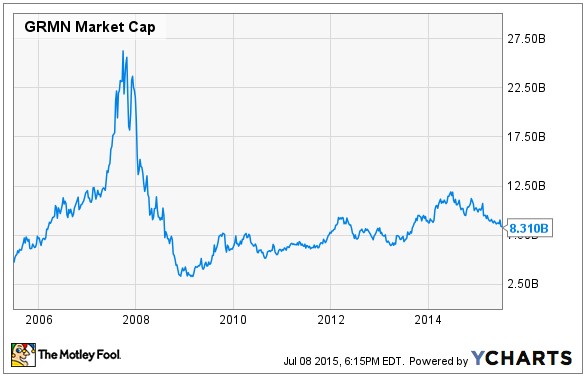 Consumers started to get a taste of GPS functionality in an all-encompassing device, and began to question the need for a dedicated piece of hardware like the Garmin Nuvi. Why pay a couple hundred dollars for a GPS when you could spend a little more and get a smartphone that does location-positioning, turn-by-turn, and then some?

The company tried to keep up, offering an SDcard-based solution, the Garmin Mobile XT and later, an actual smartphone, the nuvifoneTM, but consumers were OK with a "good enough" GPS app on a device that could do more. By the time Google debuted its Android mobile operating system in October of 2008, Garmin's market cap had dropped to $5B.

I don't mean to pick on Garmin, fellow GPS manufacturers TomTom and Magellan also fell victim to smartphones and their Swiss army knife functionality. When I look at Fitbit, a company that exclusively offers wearable health and fitness trackers, I can't help but envision the same fate.

Remember those enticing metrics I pulled from their S-1? That market share data was as of March 2015. The Apple Watch launched April 24 and didn't hit stores until early last month, but early estimates place it among the top two or three wearables vendors globally, by shipments.

FitBit's offerings range from the $60 Zip to the $250 Surge. Across that spectrum, functionality ranges from collecting stats on steps, calories, and wireless data syncing all the way to GPS tracking, and monitoring sleep and heart rate. A mid-level device would run around $130 and offer most of those features.

The Apple Watch Sport can be had for $349-$399, depending on whether you opt for the 38mm or the 42mm version, and offers most of the health tracking functionality of FitBit's Surge. It's probably not as rugged as FitBit's offering, but aside from power-users it will probably do enough for most folks. The Surge blows it out of the water in battery life, but the Watch is tethered to the most popular smartphone on the planet and has Apple's army of app developers adding value via non-health related functionality.

But it isn't just Apple, the usual cast of tech monoliths are creeping into the space -- Google, Samsung, Microsoft, Xiaomi, and LG are all looming large. Even in the more narrow hardcore performance segment, FitBit has competition from Jawbone, and funnily enough, TomTom and Garmin.

While Garmin's evaporating growth story may seem disenchanting, the company survived, carving out a niche in advanced navigation devices. It's a dramatically smaller addressable market than many expected, but it keeps the company profitable. Six years from now, we might be saying the same thing about FitBit.