Please ensure Javascript is enabled for purposes of website accessibility
Log In Help Join The Motley Fool
Free Article Join Over 1 Million Premium Members And Get More In-Depth Stock Guidance and Research
By Jason Hall - Jul 28, 2015 at 11:02AM

Westport Innovations is working hard to fix its capital structure and turn sales around. Here's what to look for this week.

When beleaguered natural gas engine technology company Westport Innovations, Inc. (WPRT -3.88%) last reported earnings, the big headline grabber was "70% reduction in cash used in operations." Investors who have followed the company know just how big a focus cost containment has become for the company, with sales in core markets like Europe having fallen dramatically over the past year or so. Factor in so-far limited traction with the company's heavy-duty engine technology.

With these things in mind, let's take a look at what investors should watch for when the company reports earnings this week.

Gotta cut costs, cash burn
When Westport last reported, management talked about continuing to tighten up on costs. It has already made major strides over the past year-plus. The late 2013 decision to discontinue its in-house built 15-liter HPDI engine, due to the high fixed costs and relatively low demand, was the first major step, but far from the last, with the company announcing major organizational realignments in its operations and product development late last year, including staffing reductions and the decision to cut the number of active development programs. In short, the company has taken major steps to get cash burn under control.

This is a major necessity, since cash on hand has fallen significantly while debt has increased over the past year: 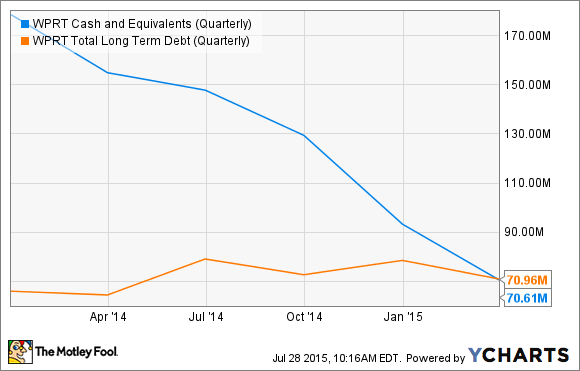 On the last earnings call, both CEO David Demers and CFO Ashoka Achuthan commented on potential asset sales as a source of cash. Demers stated that they had identified $50 million in "non-core" assets they were negotiating with potential buyers for. When further questioned about the timing later on the call, Achuthan said to "keep your ears peeled for the next two quarters" on this. It's possible that we learn more on the earnings call, but I think it's more likely that the company would have already issued a press release if it had sold off assets to raise cash.

At any rate, cost containment and raising cash are key items to watch closely.

But it gets back to sales growth
Westport simply cannot "cut" its way forward -- and that's beyond the investment thesis based on the growth opportunity for natural gas engines. The company probably couldn't cut enough from operations to sustain the business. It's all about igniting growth. This starts at the company's two joint ventures, which are major sources of cash.

Over the past two quarters, there has been some good and some not-so-good from the ventures with Cummins and Chinese WeiChai. After reporting strong sales at the end of last year, both JVs reported sales declines last quarter. While the decline was moderate at CWI (with Cummins), it was massive at WWI (with WeiChai), with revenue falling by half. The reality is that by most accounts both ventures develop solid products, and are with reputable, industry-leading partners, so it's not really clear what (if anything) Westport can do to ignite sales growth. But for now, profit growth is more important, frankly.

That's where the good news is. After struggling for several quarters with warranty costs, CWI has reported strong margins over the past two quarters as the company moves past the warranty issues. Profits over the past two quarters are greater than what it reported for all of 2014, with the $13.1 million paid to Westport by the JV helping offset the company's development costs for new products. WWI's sales were well down last quarter, but the positive is that profit margin percent doubled to 10.2% from the year before.

Margins have been -- and remain -- a key focus for both joint ventures, considering that these ventures are expected to be key sources of income for Westport.

The company also recently announced it was adding a propane-fueled version of its WiNG Ford F-150, to go along with existing compressed natural gas versions. This may seem like a minor new addition -- and in terms of sales for Ford, it is -- but it could help turn a cash-burning business into a profitable one for Westport.

HPDI -- high pressure, direct injection -- has been a major area of focus for Westport and the market for the past several years, as this is the key technology that Westport claims will enable every trucking application to be able to utilize natural gas. So far, though, this product has yet to break through and come to market in any substantial way. Westport is selling HPDI components to its WWI JV in China, but there is yet to be a North American or European OEM to bring it to market.

The closest so far is AB Volvo, which has announced a commercial program for HPDI, but put it on hold last year, citing unclear current demand for the product. Westport recently announced it had completed the engineering phase of development with Daimler -- which is the leading truck seller in Europe by units -- but provided no further info about commercial development.

However, Westport did offer up some hope last quarter that its core OEM supplier business in Europe was recovering, and that sales were up last quarter, before adjusting for currency exchange. With much of Europe's economy growing stronger, Westport needs to see this improvement continue.

Can't fix it overnight
Clearly, Westport has some pretty serious challenges in front of it. Even with the sequential and year-over-year improvements in operating expenses, and the better profitability at its joint ventures, it's not likely that the company will report any major advances this quarter -- but that's OK. At this point, it's probably best to watch for incremental improvements as it moves toward its stated goal of positive cash from operations by next year.

So keep an eye on those cost reductions and any change in cash position, as well as -- and most importantly -- on any recovery in sales at the JVs as well as the company's operating units. Cutting costs is important, but it's going to take sales growth to turn things around.

Jason Hall owns shares of and options for Westport Innovations. The Motley Fool recommends Ford. It recommends and owns shares of Cummins and Westport Innovations. Try any of our Foolish newsletter services free for 30 days. We Fools may not all hold the same opinions, but we all believe that considering a diverse range of insights makes us better investors. The Motley Fool has a disclosure policy.