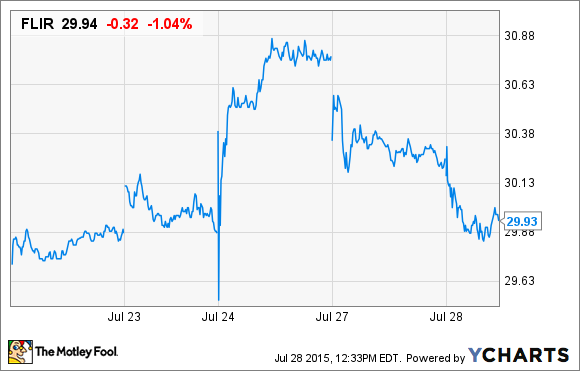 It's not often you see a stock report an "earnings miss," then immediately pop 3% in price. But that's precisely what happened at see-in-the-dark equipment maker FLIR Systems (NASDAQ:FLIR) last Friday. Why?

Well, it's a complicated story, so let's begin with the basics. FLIR reported its Q2 2015 earnings results on Friday morning, and the news went like this:

That, as they say, was the good news. The bad news was that cash from operations plunged 31% to just $48.9 million. And when combined with capital spending that jumped 9% year over year, this left FLIR with free cash flow of just $31.3 million for the quarter -- barely half the cash produced one year ago.

So, the question is: Does the good news on GAAP earnings outweigh the bad news we see reflected in the actual amount of cash FLIR is producing from its business?

I think not, and I'll tell you why.

Based on management's most recent guidance, FLIR is expected to earn between $1.60 and $1.70 per share this year "excluding restructuring charges." Those restructuring charges don't appear to be excessive enough to affect valuation much -- about $300,000 after tax in Q2. So, if we take $1.65 as a likely midpoint for earnings this year, then FLIR shares at $30 apiece are selling for about 18 times current-year earnings today.

Considering that FLIR pays a 1.4% dividend yield, is expected to grow earnings at about 15% annually over the next five years, and grew 16% last quarter, 18 times earnings doesn't seem like an unreasonable valuation for the shares. To that extent, investors' decision to bid up FLIR shares last week seems unobjectionable.

However, FLIR's weak free cash flow production in Q2 leaves the stock with just $153 million in trailing FCF produced over the past 12 months. That's 32% less "cash profit" than appears as the company's accounting profits with its $224 million in GAAP net income. And it means that FLIR, at a $4.2 billion market cap, now costs nearly 27.5 times trailing free cash flow. Even with a 15% (or 16%) growth rate, that valuation is hard to justify.

The upshot for FLIR investors
Initially enamored of FLIR's results last week, investors appear to be having second thoughts about the stock -- and its valuation. I think they're right to be cautious. Twenty-seven times free cash flow might be a fair price to pay if FLIR were growing free cash flow somewhere in the low-to-mid 20% range. But if the best the company can manage is mid-teens growth, this stock could be worth quite a bit less than it's selling for today.

Bright as I think the prospects are for FLIR and its thermal imaging technology, if the company wants to hold on to its present valuation, it's simply going to have to do a better job of transforming those prospects into profits.