That sounds a lot worse than what was happening below the surface, as the master limited partnership recorded increased gross operating profit -- a non-GAAP figure -- of $1.3 billion against revenue of $7.1 billion. Additionally, distributable cash flow increased a modest 2.5% to $987.5 million providing 1.3 times coverage to the next quarterly cash distribution.

The challenging oil market conditions finally catches up with midstream
Total revenue declined a massive 43% from last year, but this is not much of an issue for Enterprise because 85% of its gross margins are set with fixed fee contracts. So even though commodity prices and revenue can swing wildly, gross margins remain the same. This is how the company was able to increase its gross operational margin despite the big fall in revenue, as you can see in the table below comparing gross margin for each of Enterprises operating segments.

Segment performance
Natural gas processing volumes showed no change from year ago numbers and remained constant at 4.9 billion cubic feet, or Bcf, per day. However, processing margins themselves were lower by $57 million which primarily explains the lower earnings in the NGL Pipelines & Services segment. In addition, it's natural gas liquids, or NGLs, production fell almost 10% to 123,000 barrels per day.

Crude Oil Pipelines & Services segment reported a handsome 28% increase in gross profit thanks mainly to Enterprise's acquisition of Oiltanking L.P. While crude oil transportation volumes increased 15% to 1.5 million bpd, what contributed to the increased profits were the MLP's stake in the Seaway pipeline ($28 million) and its ownership in the Houston Ship Channel terminal ($37 million). Investors will be aware that much crude oil produced in the U.S. mid-continent region vies for the Gulf Coast refineries that increases demand for pipelines to this region.

Natural Gas Pipelines segment recorded a slight drop in profits mainly due to lower natural gas transportation volumes which fell 1%. Additionally, average fee from contracts also fell since this particular part of the business has contracts where fees are indexed to natural gas prices, whose market has been dismal. Petrochemical and refined products transportation also grew by 9% year-on-year to 875,000 bpd. Again transportation and storage at the Houston Ship Channel Terminal and the Beaumont Marine West Terminal helped boost profits. 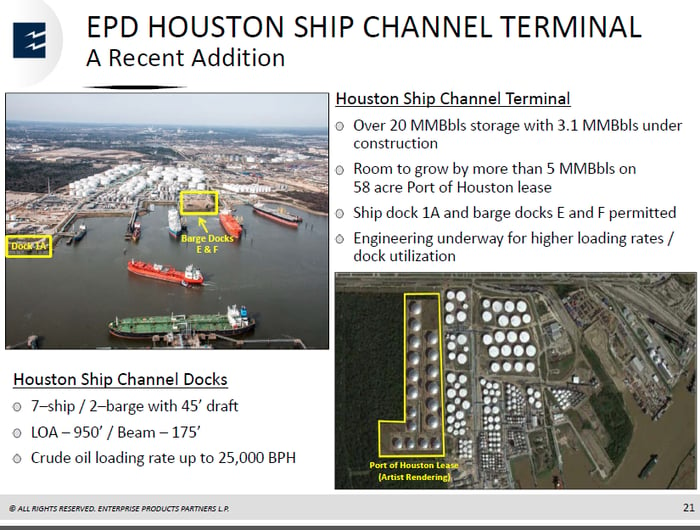 Capital expenditures increased to $837 million from $477 million a year back. However, it's still lower than the $947.6 million cash flow from operations. For the first half of 2015, capex stood at $1.6 billion -- considerably lower than operating cash flows of $1.9 billion.

By the end of the year, Enterprise expects to bring $2.4 billion worth of projects into commercial operations. Two projects of note are its Aegis natural gas liquids pipeline that will move NGLs from the Marcellus/Utica gas formations to the Gulf Coast as well as expansion of its LPG export terminal in the Houston ship channel. As these projects ramp up, they should help pad the company's distributable cash flow even further.

Foolish takeaway
Despite the eye popping decline in revenue and the missed earnings, Enterprises' business segments delivered growth in gross operational margins and distributable cash flows. Contributions from its Oiltanking acquisition and new projects helped to make up for some weakness in the few business segments that are exposed to commodity prices. The outlook also bodes well for Enterprise as it expects to bring on several new projects in the upcoming quarters.