Please ensure Javascript is enabled for purposes of website accessibility
Log In Help Join The Motley Fool
Free Article Join Over 1 Million Premium Members And Get More In-Depth Stock Guidance and Research
By John Rosevear – Aug 10, 2015 at 9:43AM

Net income fell, but the company's sales of EV parts to its electric-car-making joint venture with Geely Automotive soared, and its outlook remains bright.

Kandi's pivot to electric cars is nearly complete
During the company's earnings call, Kandi CFO Wang Cheng said that much of the drop in net income was due to declines in value of "financial derivatives" held by the company.

But the jump in revenue was good news. Even better for investors focused on the potential for electric cars in China: Nearly all of Kandi's revenue ($46.6 million) came from sales of electric vehicle parts to a joint venture that it operates with Chinese automaker Geely Automotive (GELYF 0.71%). That's up 168% from a year ago.

Kandi began as a small maker of gasoline-powered all-terrain vehicles and go-karts, but the joint venture to make affordable electric cars with Geely boosted its global profile in a big way. It has been moving to focus on the electric-vehicle business; the big increase in revenue from sales of EV parts suggests that pivot is nearly complete.

Geely isn't a huge automaker -- it sold just over 400,000 cars last year -- but it's well known to global investors as the current owner of Volvo Cars.

The joint venture, called Kandi Electric Vehicles Group, sold 4,466 electric vehicles during the quarter. That may not sound like a lot, but it's up 8.1% from a year ago. And Kandi announced on Monday that the joint venture had just signed a contract to deliver 4,000 vehicles to Zhejiang Shi Kong Electric Vehicle by the end of the year. That contract will be worth about $89 million in revenue, Kandi said.

The market is tiny, but its potential is massive
The potential here is massive. Many Chinese cities are dealing with fierce air-pollution issues, and the government is taking increasingly strong steps to encourage the adoption of cleaner technologies, including battery-electric cars.

Kandi's KD-5011 is a two-seat electric minicar designed for urban driving. It has a top speed of 72 km/h (about 45 miles per hour) with range of about 160 km (99 miles). Source: Kandi Technologies.

Kandi's focus is very different from the direction taken by Tesla Motors and the electric cars that we've seen from the established global automakers. Rather than building electric cars that seek to duplicate the performance of premium gasoline vehicles, Kandi has focused on tiny, inexpensive models for urban commuters. Many of the joint venture's cars are sold to an urban car-sharing service that it operates. Given China's size, its huge and congested cities, and increasing government support for clean transportation, the potential for such vehicles is huge. That's what drew investors to Kandi.

So far, though, those investors haven't had a lot to like from the stock's performance.

Investors' patience has been tested
Kandi has been consistently profitable. But the performance of its stock over the last year leading up to this earnings report has been disappointing, to say the least. 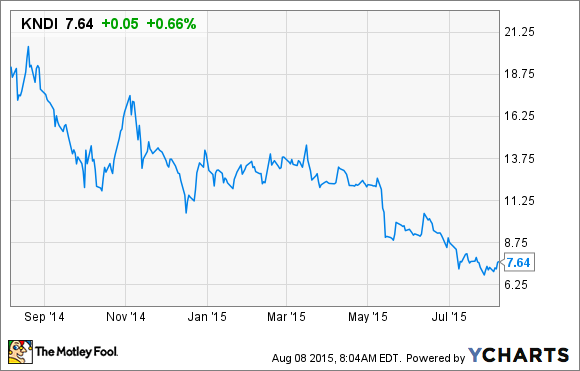 Investors' patience has been tested in part by Kandi's low EV sales numbers. So far, electric cars have yet to catch on with Chinese consumers. China's EV makers together delivered just 10,856 vehicles to buyers in May, according to China Passenger Car Association figures cited by ChinaAutoWeb.

In that context, the sales figures from Kandi's joint venture look much more substantial. It sold 10,935 vehicles last year, and it expects to roughly double that total in 2015.

Kandi's outlook remains upbeat
Kandi isn't expecting a radical jump in its sales volumes quite yet, but its outlook remained upbeat on Monday. The company said that it expects third-quarter revenue to come in between $49 million and $51 million, with gross margin between 13.5% and 14.5%. It expects the joint venture to deliver between 5,500 and 6,500 electric vehicles next quarter and between 20,000 and 25,000 for the full year.

John Rosevear has no position in any stocks mentioned. The Motley Fool recommends Kandi Technologies. It recommends and owns shares of Tesla Motors. Try any of our Foolish newsletter services free for 30 days. We Fools may not all hold the same opinions, but we all believe that considering a diverse range of insights makes us better investors. The Motley Fool has a disclosure policy.