Please ensure Javascript is enabled for purposes of website accessibility
Log In Help Join The Motley Fool
Free Article Join Over 1 Million Premium Members And Get More In-Depth Stock Guidance and Research
By Joe Tenebruso - Sep 10, 2015 at 10:40AM

These dominant businesses are paying large -- and growing -- dividends to their investors.

As oil and natural gas prices have plummeted in recent months, so too have the stock prices of many outstanding energy companies -- even those with far less exposure to commodity prices than their sharply lower stock prices would suggest. Pay attention Fools, therein lies our opportunity.

As traders focus on the day-to-day swings in energy prices, long-term minded investors can pick among the rubble, and acquire high-quality assets at fire-sale prices. Even better, we can get paid handsome dividends while we wait for an eventual rebound in oil prices -- and the sharp recovery in the stock prices of these businesses that will likely follow.

The growth story
Spectra Energy (SE) is one of North America's leading pipeline and midstream companies. Its operations include:

Spectra's stock price has plummeted along with oil and natural gas prices, even though its operations have only negligible exposure to commodity prices. 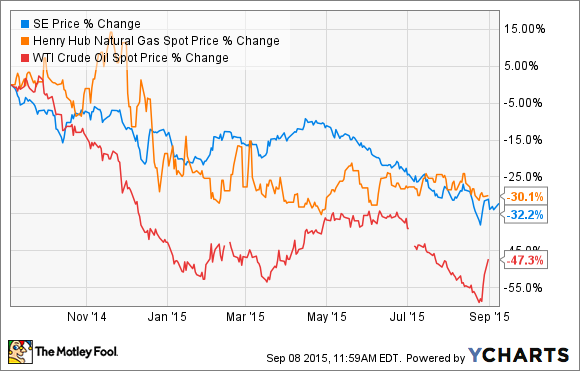 In fact, Spectra expects 99% of its ongoing EBITDA from 2015 to 2017 to come from fee-based sources. And while oil and natural gas prices are down more than 30% in the last year, Spectra's majority-owned master limited partnership, Spectra Energy Partners (SEP), increased its ongoing EBITDA by 28% in its most-recent quarter.

All told, Spectra is slated to increase its dividend by an annualized 9% for the next three years. And with a large and growing backlog of projects slated to come online through the end of the decade -- the company remains on track to bring $35 billion in projects online from 2013 to 2020 -- Spectra should continue to reward shareholders with a steadily rising stream of dividend income for many years to come.

The titan
Kinder Morgan (KMI -0.10%) is another powerful energy infrastructure company. In fact, it's the largest midstream company in North America, with 84,000 miles of pipelines -- which transport natural gas, crude oil, carbon dioxide, and refined petroleum products -- and 165 storage and distribution terminals.

Kinder Morgan is benefiting from the tremendous boom in shale production, which has led to surging demand for more energy infrastructure. Kinder Morgan's backlog of projects continues to grow -- rising by $3.7 billion to $22 billion in the most recent quarter -- as it helps to connect production areas with demand centers across the continent. 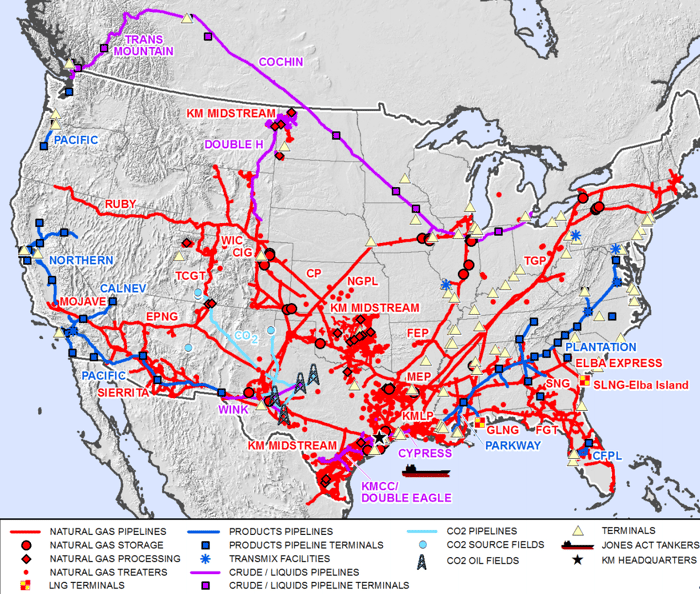 Yet Kinder Morgan's stock has also suffered alongside failing oil and natural gas prices, and is now down 20% in the last 12 months, and 30% from its 52-week high reached back in April. But like Spectra Energy, most of Kinder Morgan's businesses operate like toll roads in which the energy giant receives a fee for its services, and thereby avoids commodity price risk. In fact, approximately 85% of Kinder Morgan's projected 2015 cash flows are fee based. And the company excels at passing those fees on to its investors in the form of a steadily rising dividend. 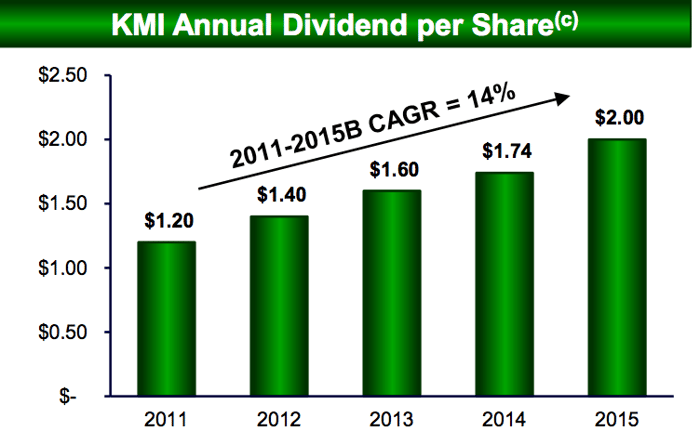 Considering Kinder Morgan's high-quality collection of mostly fee-based assets, and its proven track record of shareholder value creation, it appears that the market is acting irrationally in how it's pricing KMI's shares. Founder Richard Kinder certainly seems to think so, and he and other members of Kinder Morgan's management team have been using the downturn to buy more shares in the company.

Investors may wish to consider buying alongside these company insiders; with its current 6.3% dividend yield, Kinder Morgan's shareholders are being paid well as they wait for the market to recognize the value of its assets and cash-generating ability.