The upside for General Motors' luxury Cadillac brand is significant, but it has many challenges on the road ahead.

For the first time in 15 years, according to Cadillac, cargo flew over Manhattan, New York, last week, as the automaker airlifted its soon-to-be-launched XT5 crossover via helicopter over the Hudson River. The flyover stunt, in combination with teaming up with fashion design firm Public School, is intended to show off the new ride at shows around the world in an attempt to stir up interest in General Motors' (GM 4.00%) luxury Cadillac lineup among younger consumers.

While General Motors remains committed to transforming Cadillac into a major global luxury brand, it will definitely be an uphill battle over the next decade. Let's look at why Cadillac is so important to GM's investing thesis and some of the problems it faces.

Why is Cadillac so important?
If you're reading this, you probably don't need a quick crash course on how to make money in the automotive industry. But just in case, I'll sum it up quickly: Sales of full-size trucks, SUVs, and luxury vehicles generate the vast majority of industry profits. Ironically, when you think about it, despite the wide success of the largest global automakers, not a single one has quite figured out all three of those very profitable segments.

Toyota, for instance, has an excellent luxury brand in Lexus as well as a plethora of successful mainstream passenger cars. However, Toyota's full-size truck has failed to gain much traction in the U.S. market. On the flip side, General Motors is selling highly profitable SUVs and full-size trucks left and right, but its Cadillac brand is lagging behind in sales gains.

For investors, Cadillac is extremely important for GM's top- and bottom-line performances going forward. Consider that while luxury brands only represent 10% of global auto sales, they generate 50% of global auto profits. That sales-to-profit ratio offers an extremely valuable return on invested capital for automakers. The upside for GM's financial performance would be significant if it could improve Cadillac's 3.4% market share of global luxury sales to near the company's overall 9.2% market share of global auto sales.

Obviously, Cadillac nearly tripling its global market share would take quite some time, but consistent progress would thrill investors. That said, what's GM's plan for Cadillac?

In the near term, management is planning to expand the segment reach of the Cadillac brand by introducing new vehicles in new segments, because right now the automaker has overlapping products. 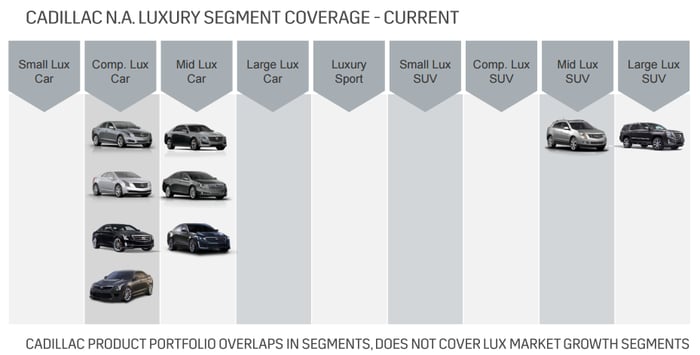 Now, look below at the future plan for Cadillac's product lineup: 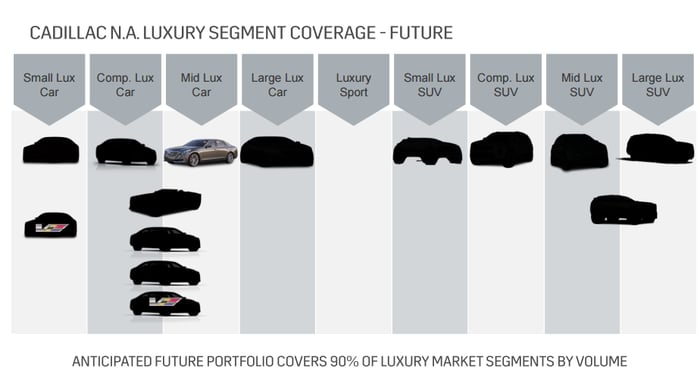 Cadillac will launch five new SUVs or crossovers, a new subcompact car, and three redesigned models by the end of 2020. As Cadillac increases the number of segments it competes in, it should be a significant boost to sales and market share. GM's goal is to grow Cadillac's global luxury market share from 3.4% currently to 5% by the end of 2020 -- that's a significant uptick that investors should expect to happen more quickly toward the end of the decade. Another factor Cadillac will be working on is the competitiveness of its dealership network. Consider that in the U.S. market, Cadillac's retail sales hit about 165,000 units last year, which was less than half of Mercedes-Benz's 337,000 units and BMW's 382,000 units. Yet, despite that sales discrepancy, Cadillac's number of dealerships is significantly higher, at 928, than Mercedes-Benz's 365 or BMW's 362 dealership count.

Ultimately, it's becoming more and more important for automakers to have a successful global luxury portfolio, and it's a topic that investors should pay close attention to in the years ahead.