It's true that dividends can make you rich. Used correctly, quarterly or annual payouts can make the difference between a good stock and a great one, or even between the poorhouse and a plump retirement portfolio.

Sadly, building a great dividend portfolio isn't as easy as picking the highest yields on the market. Those payouts might not be sustainable in the long run, or they could be tied to a plunging share price. Either way, the long-term value of a big dividend yield isn't always what it seems.

To help you avoid a few glaring dividend yield traps, we asked a panel of Motley Fool contributors for help. In short, you should avoid AT&T (NYSE:T), Corrections Corporation of America (NYSE:CXW), and Garmin (NASDAQ:GRMN) like the plague.

Want more detail? Okay, but be warned: Looking too deeply into these dividend yield traps might give you nightmares. That being said, here we go.

How much longer will these flags fly together? Image source: Corrections Corporation of America.

Corrections Corp is a special type of REIT in that it not only owns real estate upon which prisons sit, but it also owns and operates the correctional and detention facilities themselves (47 owned and operated, 20 managed but not owned, according to S&P Capital IQ). It also pays a temptingly high dividend yield of 7.5% -- but don't be (small-f) fooled. This dividend is a trap.

According to data from Yahoo! Finance, Corrections Corp currently pays out nearly 118% of its annual profits to fund its dividend. Indeed, you can see on Corrections Corp's cash flow statements that over the past 12 months, for example, free cash flow generated by Corrections Corp amounted to only $185 million, 12% below the company's reported net income of $210 million. Without enough profits coming in to match its dividend outlays, the company's payouts could be in peril -- and perhaps sooner than you think.

Why? Public opposition to Corrections Corporation's business model is growing. Last year, prison population growth finally reversed, and the number of incarcerated individuals began to fall. I think the trend is only going to accelerate from here.

From highly rated Orange is the New Black on Netflix, to VICE News' recent HBO special on the need for prison reform, to bipartisan agreement among the president and both sides the aisle in the U.S. Congress, criticism of America's private prison industry has entered the national zeitgeist. I think it's only a matter of time before legislators begin rolling back, canceling, and refusing to renew contracts with private, for-profit prison operators like Corrections Corp.

When that happens, Corrections Corporation's attractive dividend yield is going to get sent to the SHU.

Anders Bylund (AT&T): AT&T comes with a juicy dividend yield; back when the company was a part of the Dow Jones Industrial Average, you could depend on Ma Bell's payouts to top that list of elite businesses. Even now, AT&T's 5.8% yield leaves the entire Dow field looking skimpy by comparison.

But it's not all sunshine and rainbows for AT&T's income-focused investors. You see, that juicy dividend yield is only possible thanks to faltering share prices.

Over the last five years, AT&T shares have risen a measly 13% and missed out on a 66% gain for the SPDR S&P 500. Assuming that an AT&T shareholder would reinvest those generous dividends in more shares, the stock's total five-year return jumps to 48% -- a big increase, but still below the S&P's plain old price returns. And of course, the market tracker's returns soar to 84% if you had reinvested those dividends as well, which one might do via mutual funds or exchange-traded funds (ETFs). 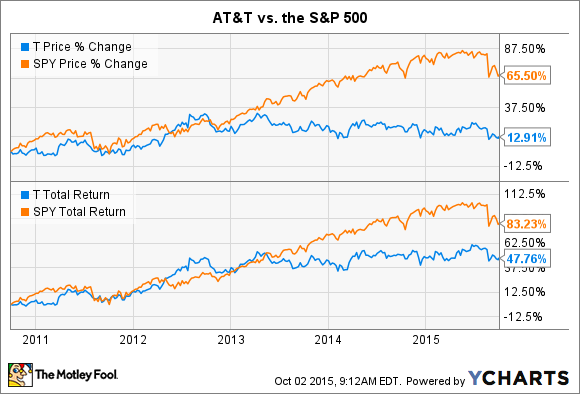 Ma Bell keeps a tight grip on those dividend purse strings. AT&T's payout per share has increased regularly, but not by much. Over the last five years, the grand total of increases added up to just 12% -- an annual average of 2.2%. Meanwhile, the S&P's payouts rose by 58%, or 9.6% annually.

It's not like AT&T has the luxury of simply boosting its payout policy by a large amount. Across the last four quarters, AT&T has paid out 79% of its free cash flows in the form of dividends. Three months ago, that cash payout ratio stood at 99%. Truly healthy dividend payers often funnel less than 50% of their free cash into dividend checks, leaving lots of headroom to handle future dividend increases, cash-intensive business projects, and the occasional emergency.

Tim Beyers (Garmin): For some, Garmin surely looks like a stock worth salivating over. What's not to like about a dividend that yields 5.75%, especially in today's low-interest environment, where a 10-year Treasury bond yields just 2.16% as of this writing?

Plenty, it turns out.

First, there's good reason to doubt whether Garmin can keep paying its dividend at the same rate it does today. Cash from operations fell 40.5% last year and is down 58.9% to just $271.7 million over the trailing 12 months, S&P Capital IQ reports. That's nowhere near enough to cover the $368.4 million paid in common dividends over the same period.

Second, a strong dividend isn't necessarily an indicator of a strong stock, and Garmin shares are down over 30% year to date. Worse, the stock has underperformed every major index over the past 12 months, the past five years, and the past decade. There's no reason believe Garmin can reverse that equation when most modern smartphones duplicate the basic functions of a stand-alone GPS device.

Garmin may still make a good product, but as a stock, it's just as likely to steer you wrong.