Please ensure Javascript is enabled for purposes of website accessibility
Free Article Join Over 1 Million Premium Members And Get More In-Depth Stock Guidance and Research
By Tyler Crowe - Oct 7, 2015 at 9:44AM

Further job cuts and the announcement that it will need to sell even more assets to make the Baker Hughes merger happen weighed heavily on Halliburton's stock.

What: Shares of Halliburton ( HAL 2.64% ) declined 11% in the month of September following company announcements that it would be cutting its total workforce even further than previously announced and that it was looking to divest additional assets in order to facilitate the merger with Baker Hughes ( BHI )

So What: Even though few oil producers are making a positive return at today's oil prices, there hasn't been much relief when it comes to crude oil prices as of late. And without some sort of price relief, there isn't much incentive for companies to drill new wells. So on September 24th, Halliburton announced that it was cutting its workforce by an additional 2,000 people from the previously announced 14,000 layoffs so far this year.

On top of that, this past month Halliburton and Baker Hughes announced that they plan to sell even more assets as a way to get approval from the US Department of Justice to let the Halliburton-Baker Hughes merger continue. The assets the two companies plan to sell to meet the DoJ's request totaled $5.2 billion in revenue back in 2013. 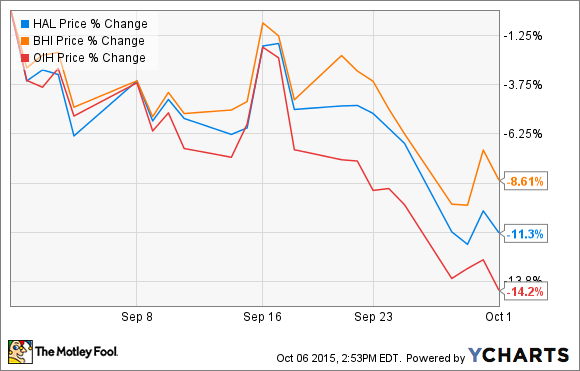 Now What: One thing to keep in mind with both Halliburton and Baker Hughes is that, despite their massive size, both companies are much more tied to the North American market than most of its peers in the oil services space. So far, some of the biggest declines in rig counts  and drilling activity have taken place in the US and Canada, which means that Halliburton and Baker Hughes are going to suffer that much more than others with less exposure to the North American market. So unless there is a quick turnaround in North American drilling activity, then it would not be surprising if further job cuts come in the future.

From an investors perspective, it's hard to evaluate the prospects of Halliburton or the combined company until we know for certain what the company will look like once it is a merged entity. As this recent announcement regarding further asset sales shows, the definitive structure of the new company is still uncertain. Therefore, it's probably best to sit on the sidelines and wait until the merger is completed before using this past month's decline as an opportunity to jump into shares of the company.