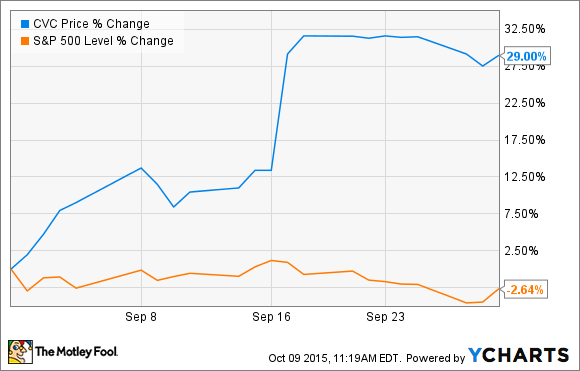 What: Shares of Cablevision Systems (NYSE: CVC) gained 29% in September, according to data from S&P Capital IQ. There's no mystery behind this jump at all: Cablevision is being acquired, and September's gains simply reflect the premium-priced buyout deal.

So what: Dutch telecom conglomerate Altice is paying $34.90 per Cablevision share. The total enterprise value for this deal works out to $17.7 billion, which includes Altice taking responsibility for Cablevision's $9 billion of net debt. If you look back to May, when the first rumors about this deal started percolating and pushing Cablevision's share prices upward, the Altice deal has unlocked four-month returns of more than 55% for the cable company's shareholders.

Now what: This is not Altice's first American rodeo. The company claimed a 70% stake in cable broadcaster Suddenlink in May. Altice was also reportedly looking to take over Time Warner Cablewhen that company was left at the altar.

The American cable industry is consolidating in a big way, and Altice sees an opportunity to build an American presence as well as a complementary business focus aside from its traditional phone and data services. With Suddenlink's Midwestern markets and Cablevision's dominance in the greater New York area under its belt, Altice will have the beginnings of an all-American cable footprint.

Already approved by Cablevision's shareholders -- specifically, the controlling Dolan family, which founded the company in the first place -- and with big-bank financing all set up, this deal is only awaiting regulatory approvals. It should close in 2016, and Cablevision shares aren't likely to move very far from the final $34.90 price per share in the meantime.