By earning a lot of money and retaining most of it, Capital One has grown its tangible book value per share by more than any other big bank since 1995.

Capital One's tangible book value has soared like an eagle over the past 20 years. Image source: iStock/Thinkstock. 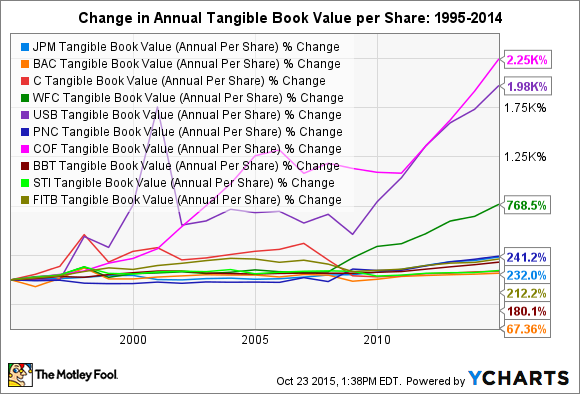 This is one of the most essential measures of a bank's success, as a bank's share price derives in no small part from its tangible book value. This follows from the fact that the most common way of valuing bank stocks is as a multiple of book value. Thus, a bank that can grow its tangible book value per share faster than its competitors is also likely to outperform them in the arena of shareholder returns.

Capital One and U.S. Bancorp are in a league of their own when it comes to the growth in their per-share tangible book values. Capital One's tangible book value per share has soared by more than 2,200% since its initial public offering two decades ago, according to data from YCharts.com. Over the same stretch, U.S. Bancorp's has grown by roughly 2,000%. By contrast, the average of the eight other $100 billion-plus banks in the chart is only 235%, weighed down of course by the financial crisis, during which Bank of America and others lost tens of billions of dollars.

While U.S. Bancorp accomplished this with a straightforward model of prudent commercial banking, albeit executing on its operational imperatives more adroitly than Bank of America and others, Capital One has taken a different path.

On top of this, although Capital One did lose money at the nadir of the financial crisis, which both U.S. Bancorp and Wells Fargo were able to avoid, the magnitude of its 2008 loss was smaller than Bank of America's and others, as you can see in the "Minimum Annual Return on Equity" column in the table below.

But while Capital One's profitability has certainly helped the McLean, Virginia-based regional bank to rapidly increase its tangible book value, there's more to the story than that; otherwise, Wells Fargo would have outperformed it over the same stretch.

The difference, in turn, is that Capital One has retained substantially more of its earnings than its big bank counterparts. Since 1994, its cumulative dividend payout ratio is only 9.4%. The average among the other nine big banks is 42%. When you couple this with Capital One's above-average return on equity, it stands to reason that its tangible book value has grown by more than any other big bank over the past two decades.