Tile Shop Holdings (NASDAQ:TTSH) reported third-quarter financial results on October 20, and, frankly, there was a lot to like. The highlights:

While the results above are strong, there's a lot more investors should know about what's happening at Tile Shop. Let's take a deeper dive into the earnings release, because there are some pretty major changes that first-year CEO Chris Homeister has initiated. And those actions are at least in part driving the strong results above. Let's dig in.

New CEO making big changes
There was a lot of -- understandable -- uncertainty when Homeister took the CEO seat at the start of 2015. After all, he was replacing the founder, Bob Rucker, and had only been with Tile Shop for around a year when it was announced he would be the next CEO.

Factor in a resume that was heavy on consumer electronics companies (he was a VP at Gateway and a senior VP at Best Buy and light on home-improvement retailers, and investors had plenty of reason to wonder if he was the right man for the job. It may only be nine months into his tenure as CEO, but the results so far indicate that Homeister may have been exactly the change Tile Shop needed. Since taking over, he has drastically reduced the pace of new store openings, and put major focus on fiscal and operational improvements.

Balance sheet improvement
I was among many who wasn't sure that Homeister's more conservative approach to growth was the right call. After all, the tile business is very fragmented, and even the big-box home-improvement retailers Home Depot and Lowe's only make up a small fraction of U.S. tile sales. So, for Tile Shop, which now operates 111 total stores, there remains huge opportunity to grow. But after opening nearly 20 stores in 2014, Homeister has significantly slowed the pace of expansion. Tile Shop only opened one new store in the third quarter, and will open half as many in 2015.

What gives here? It looks like Homeister is instead focusing on strengthening the balance sheet: 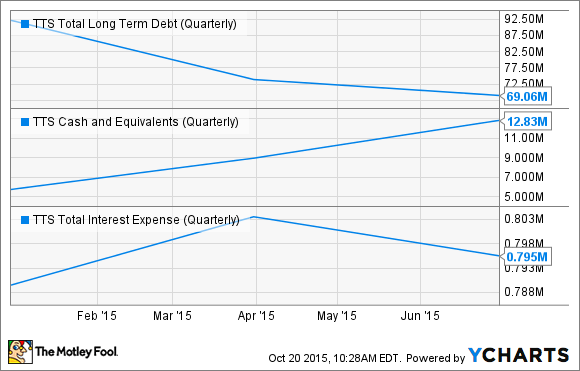 The table above only shows through the end of the second quarter in June. Through the end of September, long-term debt was down to $57.5 million and cash was up to $14.6 million, a continuation of the trend above. This is largely being driven by the slowed pace of store openings, freeing up cash that can be used to pay down the company's revolving debt. Last quarter alone, that cut debt expense nearly a half-million dollars.

And while the jury's still out on whether the slowed pace of expansion is the right move, it's pretty hard to argue that reducing debt (and interest expense) while building up a larger cash margin of safety isn't a smart move for the specialty retailer.

But that's just part of the change in philosophy and tactics that Homeister has implemented.

People and processes for better bottom-line results
Over the past couple of years, Tile Shop's operational performance has been lackluster, with operating margins getting squeezed as the company aggressively opened new locations and operating expenses rose faster than sales: 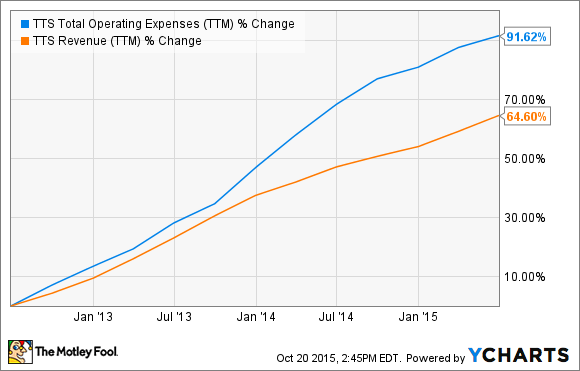 It may sound counterintuitive, with profits getting squeezed in part by rising operating costs, but management thinks the key problem has been a lack of support at the store level.

So far, it seems like this move is paying off. Management has been forthright that it's done a poor job of retaining store employees, and Homeister is convinced that this is one of the biggest reasons why sales and profits have lagged. Homeister, from the earnings call:

Employee turnover continues to decline for store managers, system managers and sales associates. From prior year levels, turnover rates were down significantly across all three of these groups in the third quarter. During 2015, we feel reduced turnover has played a significant role in our success, and we look forward to continued progress on this front.

One of the hardest and most important things to do in retail is to retain top talent and keep turnover low. If the company's efforts continue to pay off, that probably bodes well for the future.

Stepping up the pro game
Management has regularly commented on the importance of improving its business with professional customers, and it's looking like this initiative is paying off. CFO Kirk Geadelmann said that the mix of sales to pros increased 300 basis points last quarter, a significant jump. However, management thinks it can do better than the current 30% mix of pro sales. After all, some mature markets generate closer to half of sales from professionals.

While retail "do it yourself" consumers will remain important, the reality is, professionals are regular, repeat buyers. It's understandable the company would want to grow this business.

Looking ahead: Measured and steady approach
While it's not even a year into his leadership, Homeister has already made a mark on the company. His plan to better support the stores and strengthen the balance sheet, frankly, looks much more disciplined than anything Rucker did. It also looks like that's going to be the M.O. going forward.

Homeister made it clear on the call that one or two good quarters weren't going to lead to any deviation in the 8%-12% rate of store expansion in the near future, or cause the company to deviate from its plan to pay down debt and keep costs such as advertising near current levels as a percentage of sales.

Will the improved results we have seen continue improving for the long term? Only time will tell. But this focus on people and processes, as well as strengthening the balance sheet, certainly bode well for long-term investors.