General Electric Company (GE 0.94%) recently updated investors on its acquisition of Alstom's power and grid assets.The deal is an integral part of the company's refocusing on its industrial businesses, and management outlined a number of initiatives that strengthen the case for buying the stock. It's been thought of as a play on cost-cutting, but management outlined a number of growth initiatives as well. Let's take a closer look.

Headline numbers
The delay in completing the deal has had both good and bad effects:

There is a slight reduction in expectations for the contribution to 2016 EPS. However, the expected $3 billion in annual cost synergies by 2020 is still in place, and the forecast for EPS accretion for 2018 remains the same.

The following is a graphical interpretation of how the $3 billion in cost savings will be achieved, including figures for synergy investments. 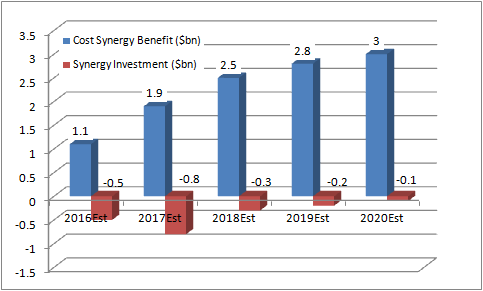 Strategic fit, growth synergy
But enough about cost synergy: What about growth synergy? It's easy to think of the deal as merely an attempt to consolidate a slow-growing industry suffering from overcapacity -- a fine activity in itself -- but it also creates growth opportunities for General Electric to grow, and to grow using strategies integral to its future.

This approach works in three ways: first, by refocusing on industrial business, in this case with the expansion in sales of its new H-class turbines; second, by expanding its higher-margin services offering; and third, by increasing long-term value in its business through the industrial Internet.

During the course of the presentation, management discussed various ways to achieve these goals:

Ultimately, management quantified its growth synergy opportunity at around $600 million by 2020, but this figure might change in the future if the company extends leadership in gas turbines or increases the value add in its industrial Internet solutions.

The takeaway
It was a positive update for investors, and management confirmed that "growth opportunities" are "better than the original outlook." Meanwhile, the annualized cost synergy of $3 billion remains the target for 2020. The integration remains on track.

All told, it's good news, as integrating Alstom is a major part of the investment case for buying General Electric. It gives the stock upside from internal execution as much as from profiting from end markets. That's a good quality to have in a slow-growing economy, and one that gives the stock the opportunity to continue to outperform its sector.