Ford Motor Company (NYSE:F) said on Thursday that it will invest $4.5 billion in "electrified vehicle solutions" between now and 2020.

Note that Ford uses "electrified vehicles" to refer to both hybrids and pure electric models. It's not clear how many of the 13 new models will be pure electric vehicles. 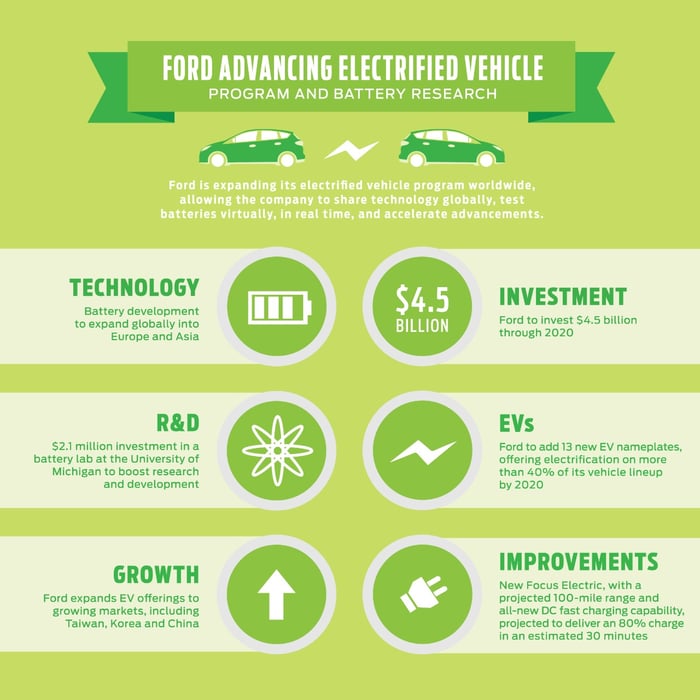 Ford also announced an updated version of its Focus Electric, a battery-electric compact sedan. Starting late next year, the Focus Electric will have 100 miles of range, up from 76 miles in the current version. And a new charging system will allow it to be recharged to 80% of the full range within half an hour, two hours faster than the current model.

Finally, Ford also said that it is changing its product-development process to "focus more on the customer experience," a significant shift that Ford hopes will help differentiate its future products from those of its rivals.

Ford is jumping into an increasingly crowded field
With this announcement, Ford joined several key rivals in publicly ramping up its commitment to hybrids and electric vehicles.

General Motors (NYSE:GM) plans to introduce a battery-electric model, the Chevrolet Bolt, that will have about 200 miles of range and a price around $30,000 when it arrives in about a year. GM is also expected to launch a plug-in hybrid version of its Cadillac CT6 sedan along with a number of other "electrified" vehicles over the next couple of years.

Volkswagen (OTC:VWAGY) has announced several premium electric models, including a Porsche sports car and an Audi SUV, that will appear before the end of the decade. VW has also said that it is developing a new architecture for battery-electric vehicles that is expected to underpin a number of upcoming models, including affordable ones.

Nissan (OTC:NSANY) is widely expected to introduce an all-new version of its battery-electric Leaf sedan in about a year. The new Leaf is expected to have significantly improved range, possibly as much as 300 miles, at a price similar to the current model's.

And, of course, Tesla Motors (NASDAQ:TSLA) has said that it will follow its luxury-level Model S sedan and Model X SUV with a more affordable product line to be launched in 2017.

Is Ford ready to compete in this arena?
Clearly, a Focus Electric with 100 miles of range isn't going to put much fear into GM, Nissan, or Tesla. But the loud hint is that Ford has much more ambitious products in the works.

Global product chief Raj Nair told The Wall Street Journal that Ford would have fully electric vehicles with the range to compete with Tesla and the others by 2020, but he didn't give any specifics.

Ford also released this "teaser" photo of a plug-in vehicle it intends to unveil at next month's North American International Auto Show. Ford tends to make big splashes at auto shows; last year's show models included the Ford GT and Lincoln Continental. That suggests that whatever is under the silk sheet is probably much more significant than an updated plug-in hybrid Fusion.

Ford released this teaser photo of a model it plans to introduce at the North American International Auto Show next month. It's clearly a plug-in, but what kind? Image source: Ford Motor Company.

The upshot: Ford wants to be an electric-vehicle player
Ford executives have been hinting at a big push into "electrification" for a few years now. Development of at least some of these new products is likely fairly advanced.

So why the big announcement now?

First, I think Ford is setting the stage for whatever it plans to introduce at the big auto show in Detroit next month. Second, and maybe more importantly, while the company hasn't been trumpeting it, Ford has been making big investments in advanced technology for some time.

As more and more analysts are looking to Silicon Valley for the future of the automobile, Ford wants the world to know that it's aiming to be a player in the high-tech future.

How will that play out? We might know a little more when we see what's under that sheet next month.