While Comcast's (NASDAQ:CMCSA) Universal Pictures had a record year at the box office with three films -- Minions, Furious 7, and Jurassic World all topping $1 billion in global box office, the film studio was also responsible for the company's single worst product of 2015.

That's impressive from a company that saw its NBC network deliver Wesley Snipes in The Player. It's also notable that Universal, which also had hits with Pitch Perfect 2, Train Wreck, Straight Outta Compton, and more put out a movie that failed as badly as By the Sea did. That clunker, despite starring Angelina Jolie and Brad Pitt, managed just $2.55 million in global box office, while earning a fairly wretched 31% on Rotten Tomatoes.

By the Sea, as poorly received as it was, was not Comcast's worst product of the year, though the offending winner did come from Universal. It was a movie, and its existence and execution were truly outrageous.

It's a remake of what?
Remaking a cartoon thatran for a few years in the late 1980s and was never a hit seems like an odd choice, but that's exactly what Universal did with Jem and the Holograms. Of course, instead of even roughly using the plot from the original show (which featured a hologram-creating computer turning a mild-mannered business owner into the very glam singer Jem), the movie simply borrowed the character name. That alienated whatever fan base there may have been for the mostly forgotten character. 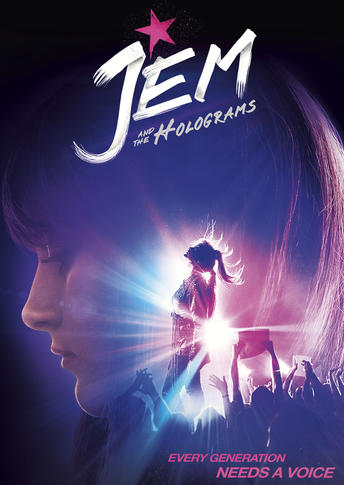 Still, with a budget that was estimated to be around $5 million, according to IMDB, it seemed as if Universal was taking very little risk here. But in addition to being one of the worst reviewed movies of the year, scoring a dreadful 19% on the TomatoMeter (which compiles reviews from approved critics), Jem managed to lose money.

Even as it was made for just $5 million, the film earned only $2.25 million in global box office, according to BoxOfficeMojo.com. Add in advertising and marketing costs -- and there was a decent push for the movie in the United States -- and the low-budget film racked up some decent losses.

Patrick Dunn, who reviewed the film for The Detroit News, giving it a generous "D+," sums up everything wrong with the movie in his review.

"Jem attempts to update a property that's been defunct and essentially forgotten since the late '80s," he wrote. "Hardcore fans won't find much of the Jem they loved under the movie's achingly hip millennial trappings, while young newcomers will be left wondering what a robot has to do with a rock band."

This was a movie that pleased nobody. While the money it lost is essentially a rounding error for the film studio, it still shows that even in a hit-filled year it's possible to deliver films that both critics and audiences despise.

Putting it in perspective
The fact that we're even talking about Jem as Comcast's worst product of 2015 shows you what a great year the company had. It did have a few disappointments, such as the underperforming Ted 2 and NBC's ratings failure The Player, but the company's dreadful film wasn't nearly as big a bomb as a movie such as Walt Disney's (NYSE:DIS) Tomorrowland.

That summer dud not only cost nearly $200 million to make, which was about the same as its global box-office take, but it will also lose the Mouse House $120 million to $125 million, according to Cinemablend. The film, which was supposed to kick off a franchise, arguably also tarnishes the Tomorrowland section of the DIsney Theme Parks, though it's possible the film came and went so fast that few people noticed.

Comcast and Universal certainly failed, with Jem and the Holograms delivering a lousy movie that lost money, but compared with what happened to Disney, it was a minor hiccup.

A lesson learned?
Perhaps the failure of Jem and the Holograms will prevent other ill-fated cinematic reboots of barely known cartoons. If this debacle saves the world from Jabberjaw: The Motion Picture, Grape Ape: The Movie, or Magilla Gorilla Unleashed, then this lousy product will have done the world a service.

Comcast and its entertainment brands had a very good year. Jem was a failure, but that does not in any way take away from its record year at the box office. If there can be good failures, this was one. It was not a Disney-style over-reach. It was a modestly budgeted film that simply didn't connect.

That's the best kind of failure you can have in the movie industry.