Please ensure Javascript is enabled for purposes of website accessibility
Log In Help Join The Motley Fool
Free Article Join Over 1 Million Premium Members And Get More In-Depth Stock Guidance and Research
By Todd Campbell, Sean Williams, and Dan Caplinger - Jan 3, 2016 at 7:43AM

The Oracle of Omaha's portfolio offers clues to what dividend paying stocks may offer upside this year.

Legendary investor Warren Buffett is famous for his uber long-term approach to investing, and his status as the second wealthiest American suggests investors might want to follow in his footsteps. Especially when it comes to dividend paying stocks that have been shown to outperform their non-dividend paying peers.

With that in mind, we asked some of our top Motley Fool contributors to scour Buffett's portfolio in search of dividend paying stocks that may make sense to own in 2016. Read on to learn which companies they picked and why.

Sean Williams: One Warren Buffett dividend stock that could be in for a particularly good 2016 after finishing 2015 flat is auto giant General Motors (GM 3.63%), of which Buffett's company, Berkshire Hathaway (BRK.A 0.62%)(BRK.B 0.80%), currently owns 50 million shares.

The entire auto industry is trading at an exceptionally low valuation, and General Motors is different. GM's forward P/E is a mere six, and its PEG ratio is below 0.4. To quote the late, great, Rodney Dangerfield, it's "getting no respect." However, 2016 could be a banner year for GM and auto sales as a whole.

To start, General Motors is benefiting from a precipitous drop in prices at the pump. Lower oil prices mean lower fuel costs, and it makes trucks and SUV's, which typically sport lower fuel efficiency than sedans and smaller vehicles, look a lot more attractive. This is important for General Motors because SUV's and trucks typically carry higher margins than entry-level compacts and sedans. With an oil equilibrium yet to be reached, oil prices are expected to remain volatile, but depressed, for some time to come.

IHS Automotive also happens to be forecasting a peak of 18.2 million auto sales in the U.S. by 2017, which would blow the old record of 17.35 million units from 2000 out of the water. A bullish forecast should benefit much of the industry, including GM.

Another key point is that General Motors also recently redesigned a number of vehicles at just the right time (i.e., when fuel prices began to drop). The makeovers for the Chevy Silverado and GMC Sierra pushed the Silverado near the 600,000 unit mark for 2015, its best performance since 2007, while the Sierra may wind up topping 220,000 units sold, which would be its best year since 2005. Even GM's aesthetic improvements, such as with the Chevy Equinox SUV, are going a long way. Sales of the Equinox may near 280,000 units in 2015 and mark its seventh straight year of increasing sales.

The real allure for GM, though, is its $1.44 annual dividend, which works out to an S&P 500-doubling 4.2% yield. Considering that GM's payout ratio is below 50%, and it's generated between $1.1 billion and $5.1 billion in free cash flow in each of the past five years, I'd call this one of Buffett's most exciting dividend stocks for 2016.

Todd Campbell: Warren Buffett's Berkshire Hathaway has nearly 35% of its money invested in financials, and one of his biggest stakes is Wells Fargo (WFC 2.14%) -- the national banker that pays a dividend yield of 2.76%.

Historically, a period of economic expansion that leads to interest rate increases boosts bank profits as assets reprice more quickly than liabilities. Since the Fed bumped up rates by 25 basis points in December and is guiding for rates to grow to 1.3% in 2016 and 2.4% in 2017, it would seem that owning a bank or two in portfolios could make sense.

In Wells Fargo's most recent quarterly filing, the company indicated that it's estimating a Fed Funds rate of 1.86% over the next two years. If the rate is higher than that, then the company could see a 0% to 5% tailwind to its earnings. Currently, industry watchers think Wells Fargo's EPS will reach $4.42 in 2016, up from $4.15 this year.

Because Wells Fargo's price to book value remains well below pre-recession highs, an argument can be made that the bank isn't overly pricey and if that's true, collecting a better than market dividend yield at a time when earnings could climb would appear to be a savvy move. 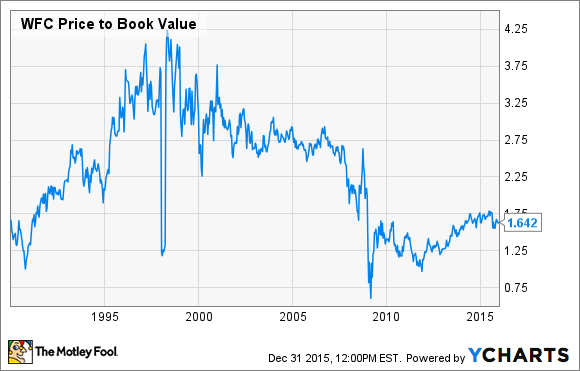 Dan Caplinger: One of Warren Buffett's longest-held holdings is Coca-Cola (KO 0.95%), and the soft-drink giant has been under siege lately because of concerns about the health impact of its sugary and diet carbonated beverages. Trends in the industry have moved away from Coca-Cola's namesake drinks toward alternatives like bottled water, juices, and energy drinks, and some fear that the company has fallen behind the curve.

However, Coca-Cola has made some smart investments lately, most recently involving a partnership with Monster Beverage (MNST 1.14%) in which the two companies swapped beverage lines in order to concentrate on their respective strengths. With its having retained a sizable stake in Monster Beverage as part of the partnership, Coca-Cola is poised to benefit from further growth in the energy-drink industry, and Monster will have access to Coca-Cola's impressive distribution network to help improve its internal efficiency and sales reach.

With a yield of more than 3% and a track record of more than half a century of annual dividend increases that has given it admission onto the elite list of Dividend Aristocrats, Coca-Cola has been a steady long-term holding for Buffett. Despite its challenges, Coca-Cola has gotten through tough times before and has a world-renowned brand to help support its future strategic moves.