The coal, video-rental, and specialty-pharmacy services industries are in trouble this year.

Companies die for all sorts of reasons, ranging from poor management to simply missing the next big trend. But some factors are out of a company's control, and even the best company in a dying industry has its hands full trying to survive. There are various industries slowly withering away today, often due to technological change.

Many of these industries will stick around for quite some time in a state of decay, but there are a few that may exhale their dying breath in 2016. Here are three industries that our Foolish contributors think might bite the dust this year.

Tyler Crowe: It's a little too early to say that coal will be completely dead by the end of 2016. After all, it still is responsible for more than one-third of all electricity in the U.S. However, it is quite possible that the coal industry is dead in terms of viable investment opportunities going forward. 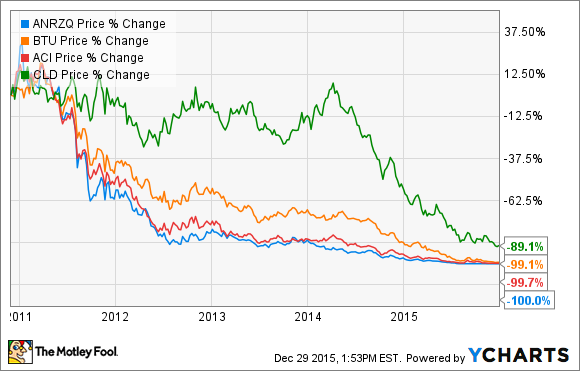 One of them -- Alpha -- has gone bankrupt. Two others -- Peabody and Arch -- are desperately looking for ways to restructure to avoid bankruptcy, and Cloud Peak doesn't look that far behind them. With coal prices still facing pressure from cheap natural gas, declining demand, and seemingly perpetual oversupply from unprofitable mines continuing to produce to avoid costly closure procedures, the investment landscape for coal that we have known for decades will likely have a very different face.

George Budwell: While most of the healthcare sector appears to be on solid ground moving into the New Year, the specialty pharmacy services industry might take a major hit, and possibly be done away with altogether in 2016. The basic issue is that major pharmacy-benefits managers like Express Scripts (ESRX) have taken umbrage with big and little pharmas alike using specialty pharmacies to juice the sales of branded drugs that could -- at least theoretically -- be replaced by cheaper generics. In a nutshell, these specialty pharmacies reportedly hinder payers from switching patients to generics by alleviating doctors from the hassle of reimbursement.

Horizon Pharma's (HZNP 1.92%) Duexis, for example, is basically a branded combination of ibuprofen and famotidine used to treat conditions such as rheumatoid arthritis. The problem is that Horizon is charging $1,500 for a month's supply of Duexis, with critics claiming that the generic versions of the drug's individual components would only cost around $40. And despite this steep price discrepancy, the company's use of a mail-order specialty pharma helped to drive Duexis's third-quarter sales up by an astounding 150% compared to the same period a year ago, which suggests that this strategy appears to be working. With Express Scripts now vigorously pushing back against this practice, however, we could be seeing the end of an era.

Tim Green: The decline of the video rental industry isn't a new phenomenon. From 2000 to 2010, DVD, game, and video rental revenue declined by about 35%, coinciding with the rise of Netflix (NFLX 6.16%), first as an inexpensive DVD-rental-by-mail operation, and later as the streaming behemoth that it is today. Blockbuster, which once operated 9,000 stores, filed for bankruptcy in 2010, unable to compete with both Netflix and Redbox, a DVD rental kiosk business operated by Outerwall (OUTR).

With streaming quickly gaining in popularity, even Redbox is now feeling the heat. During Outerwall's latest quarter, revenue from Redbox slumped by 9% year over year. The business is still extremely profitable for Outerwall, with operating margins in excess of 20%, but it appears to be in perpetual decline. Meanwhile, Netflix continues to add streaming subscribers at a blistering pace. At the end of the company's third quarter, Netflix had 43 million subscribers in the United States and 26 million subscribers in international markets, with the total subscriber count growing by 30% year over year.

The very concept of video rental may be dying thanks to streaming services like Netflix, and while Redbox and other DVD rental businesses certainly won't die out completely in 2016, the industry is in a downward spiral. With Netflix and other streaming services now creating vast amounts of original content, holdouts have more reason than ever to ditch the DVDs.