Please ensure Javascript is enabled for purposes of website accessibility
Log In Help Join The Motley Fool
Free Article Join Over 1 Million Premium Members And Get More In-Depth Stock Guidance and Research
By John Maxfield - Jan 8, 2016 at 10:48AM

As strange as it sounds, Bank of America's shareholders would be better off waiting another year or two for a higher dividend.

The executives and board members atop Bank of America (BAC -0.63%) will soon have an opportunity to show that they're genuinely dedicated to increasing shareholder value. We should know the answer to this at the end of March, when the Federal Reserve passes judgment on the updated capital plans of the nation's biggest banks.

The issue will turn on Bank of America's dividend. If it asks the Fed for permission to boost its quarterly payout, then I believe that its leadership team will have caved in to outside pressure from ill-informed investors and commentators.

To be clear, Bank of America should increase the amount of capital that it returns to shareholders. But it shouldn't use dividends to do so. Not right now.

One of the things that got Bank of America into trouble in the lead-up to the financial crisis was the fact that it had more capital than it knew what to do with. As opposed to guarding it zealously, in turn, the North Carolina-based bank spent without abandon, falling prey to what Berkshire Hathaway's vice chairman Charlie Munger calls a "prosperity-blinded indifference to unnecessary costs."

It overpaid for acquisitions, bought back $40 billion worth of stock at inflated valuations, and financed the construction of a fancy new office tower in downtown Manhattan. Author William Thorndike refers to the latter in his book The Outsiders as the "edifice complex," noting an "inverse correlation between the construction of elaborate new headquarters buildings and investor returns."

By squandering its capital on the eve of the crisis, Bank of America was unable to absorb the tens of billions of dollars' worth of losses that it inherited in its 2008 acquisition of Countrywide Financial -- arguably the country's biggest criminal enterprise at the time. This is why Bank of America needed a $45 billion taxpayer bailout to survive, whereas its more conservative peers such as Wells Fargo and JPMorgan Chase may very well have made it through the downturn on their own. 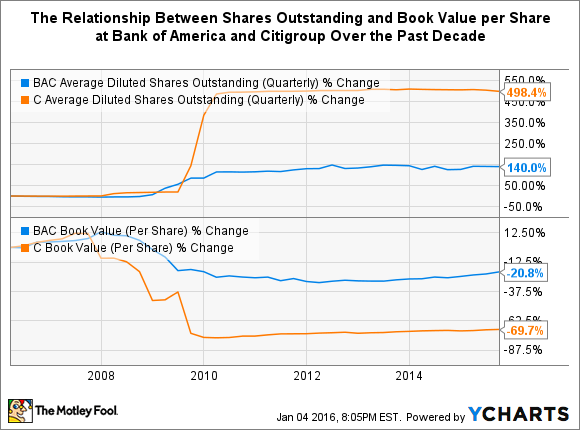 The per-share book values of Bank of America and Citigroup plummeted after the two banks issued new shares at steeply discounted valuations during and after the financial crisis. BAC Average Diluted Shares Outstanding (Quarterly) data by YCharts.

The point being: Bank of America has proven that it's an irresponsible steward of capital above and beyond what it needs to responsibly operate its business. CEO Brian Moynihan admitted as much in a 2011 interview with Fortune's Shawn Tully (emphasis mine):

In explaining his current strategy, Moynihan divides the future into two main periods. Over the next two years, he says, Bank of America will retain virtually all its earnings to build the funds necessary to comply with the new Basel III international standards of capital requirements for financial institutions, which are anticipated to be stringent. [...]

Importantly, however, my opinion that Bank of America should increase the amount of capital it returns to shareholders -- pending the Fed's approval -- doesn't mean that it should increase its dividend. The right answer is instead to scale up share buybacks as much as the Fed will allow, as Moynihan intimated above.

If you look at the most successful CEOs over the past 50 years, as Thorndike does in his book, you'll see is that they almost universally preferred buybacks to dividends. This was particularly true when the shares of their companies' stocks traded at historically low valuations.

The late Henry Singleton, founder and CEO of Teledyne from 1961 to 1990, bought back 90% of his company's stock between 1972 and 1984 for an average price-to-earnings multiple of 8. For context, the average stock on the S&P 500 currently trades at 23 times earnings, or nearly three times as high.

Singleton was the "Babe Ruth of repurchases," wrote Thorndike. "No one has ever bought in shares as aggressively," noted Berkshire Hathaway's Munger.

It's here, in turn, where Bank of America's most immediate opportunity to increase shareholder value lies. Its shares trade right now for a 27% discount to book value, roughly in line with its tangible book value. That makes it the second cheapest big bank stock after only Citigroup. By buying back its own stock, then, Bank of America will be essentially exchanging three quarters ($0.73) and getting a dollar in return.

You can't beat that math. "They haven't repealed the laws of arithmetic ... yet, anyhow," observed another famous capital allocator, Liberty Media's John Malone.

This is presumably why Bank of America's Moynihan seems to prefer buybacks to dividends. But whether he can convince his management team and board is another question entirely.