"Congratulations! You just won $90 billion!" Or so General Electric (NYSE: GE) would like to say to its shareholders.

But after a year of ups (a successful exchange of Synchrony Financial (NYSE: SYF) shares) and downs (the appliances unit sale derailed by regulators), is GE going to be able to deliver on its promises?A lot is riding on how things shape up in 2016. But first, let's look at how GE arrived at that $90 billion number in the first place.

The plan
First of all, the company has never promised a flat $90 billion. In April, GE Chairman and CEO Jeff Immelt first announced a plan to streamline GE's operations and spin off or sell off most of GE Capital's financial assets. At the time, Reuters reported that GE would return "up to $90 billion" to shareholders (emphasis mine). GE's own press release, though, touted the "potential to return more than $90 billion" to shareholders through 2018 (again, emphasis mine).

As we all know, though, "up to" $90 billion or the "potential" for more than $90 billion can end up looking very different from an actual $90 billion.

At the time, GE outlined how it planned to get to the $90 billion mark:

It's important to note that the $3.3 billion Appliances unit sale, while often mentioned by company officials as they discussed the ways GE plans to return cash to shareholders, isn't "officially" a part of the $90 billion plan.

With some 9.4 billion shares currently outstanding, that amounts to approximately $8.7 billion paid in 2015. This will decrease somewhat as the company buys back shares. However, that should be offset by dividend increases in 2017 and 2018. So it looks like GE will have no problem hitting this part of its goal.

Synchrony success
Rather than sell GE Capital's private-label credit card business, GE opted to spin it off as Synchrony Financial, which IPO'd in 2014. Since then, Synchrony has handily outperformed the market. This was good for GE, which owned 85% of Synchrony shares until November, when it allowed shareholders to swap GE shares for shares in Synchrony.

The resulting swap removed some $20.4 billion of GE shares from the market, exceeding the $20 billion goal. In the month since the swap, Synchrony has slightly underperformed GE and the overall market: 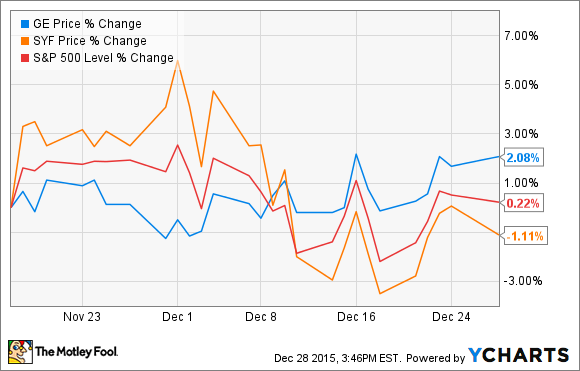 However, it's too early to make judgments about whether participating in the swap was a good or bad move for shareholders. A better measure will come on Jan. 22, when Synchrony reports its fourth quarter earnings, which cover the all-important holiday shopping season.

A hope and a prayer
GE planned to sell $30 billion of its GE Capital real estate assets within two years (so, by April 2017). It started off with a bang, announcing that Blackstone Group and Wells Fargo were buying $23 billion of them, with an additional $3.5 billion sold to other buyers. This put GE just $3.5 billion away from its real estate asset sales goal.

Since then, additional GE Capital transactions have been announced that will contribute to the $35 billion in proposed buybacks. What's not entirely clear, though, is how much GE will net from these sales. The company hasn't released details -- including sale prices -- of some of them.

But it's safe to say that even though it's signed more than $146 billion in transactions, it's not getting $146 billion in cash to return to shareholders. For example, GE is selling its $30 billion commercial lending and leasing business to Wells Fargo. But it anticipates the sale will contribute just $4.2 billion to the $35 billion goal. The sale of its entire Mexican lending and leasing business will contribute just $100 million toward the goal.

Even if GE is able to raise $35 billion through GE Capital asset sales, it might have problems using the cash for buybacks. Because of GE Capital's former size and significance, it was designated a Systemically Important Financial Institution by the government. This comes with a lot of rules and regulations about whether and how GE Capital can return cash to its parent company.

GE plans to apply for SIFI de-designation in 2016, but the government has provided no information on what criteria a company must meet to be de-designated. If GE Capital is forced to remain a SIFI, those $35 billion in planned buybacks could vanish overnight.

The Foolish bottom line
More than $55 billion of GE's $90 billion goal seems to be in the bag: the $35 billion in planned dividends and the $20.4 billion from the Synchrony share exchange. The remaining $35 billion from GE Capital asset sales is a bit less certain. However, the asset sales are proceeding apace, with announced sales of more than $146 billion. And while it's unclear whether the sales will ultimately yield $35 billion for shareholders, at least the volume of transactions to date is encouraging.

The SIFI status of GE Capital has by far the most potential to derail GE's plans. But while the government hasn't specified the criteria for de-designation, GE has a strong case that, given its divestitures to date, it no longer qualifies. And even if the government disagrees now, once further GE Capital assets have been sold off, it may come around.

While nothing in life is a sure thing, GE certainly seems to be on track to return $90 billion – or more -- to shareholders as promised.