Defining growth dividend stocks
Whether they're the best or worst growth dividend stocks, it's important to have some classification for the stocks we're discussing. To exclude penny stocks and over-volatile stocks you would never want to invest in, we'll first drop all stocks that are priced below $5 and/or have a market capitalization of less than $300 million. Next, we'll roughly define dividend stocks as those with a 3% yield or higher, and growth as a stock that has a price-to-earnings ratio greater than 50. That whittles down the entire stock market world to just 72 companies—here are two of the worst growth dividend stocks of them all. 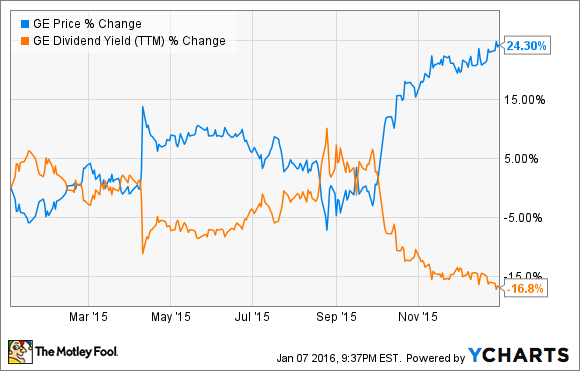 In many ways, 2015 was GE's true turnaround year following the Global Financial Crisis. In April, it announced that it would sell off its massive $275 billion GE Capital business ($75 billion of which headed to Synchrony Financial (NYSE: SYF) in a shares exchange), freeing the company from intense financial regulation and a non-core business model that many investors wondered whether ever it had any business being in. GE has already made good on around $224 billion  of its sell-off, and expects the sales to ultimately return around $90 billion to shareholders via buybacks, dividends, and share exchanges by 2018.

As GE divested itself from the financial sector, it also made a promise to investors to double-down on its area of actual expertise: industrial activities. In 2015, General Electric finalized its $10 billion acquisition of Alstom, solidifying GE's role as the world's largest power generator in terms of installed base. The company expects many synergies (to the tune of $3 billion annually), including steam/gas technology combinations  for power plants and new offshore wind energy solutions. GE's best business segment for 2015 was Power & Water, and the company expects 90%  of its operating earnings to come from industrial activities by 2018. 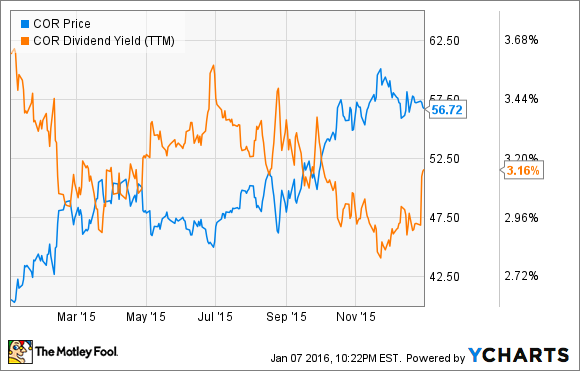 CoreSite Realty Corporation (COR) may be the Levi jeans investment of the technology age. This company builds, buys, manages, and owns the data centers  that most major corporations now need to run a successful business. Some of those businesses will thrive, while others will die, but CoreSite Realty's data centers will keep humming away in the background. With 17  operational centers spread across eight markets, investors are understandably excited about the prospects of a corporation that counts heavyweight superstar customers like those below among its clients.

REITs are known for rising alongside improving economies, and the recently announced interest rate hike served as another positive signal that the real estate sector, in general, is going strong. However, those same increased interest rates also make it more expensive for REITs to take on debt. The December 16 announcement barely budged CoreSite Realty Corporation's share price, so it remains to be seen which way this rate decision will sway.

Will 2016 Be Even Better?
General Electric Company and CoreSite Realty Corporation deserve their recognition as the best growth dividend stocks of 2015. But 2016 may be an entirely different story. General Electric will have to prove its new business model is as good as it's promised, and CoreSite will need to stay ahead of competition as commodification threatens data management margins and the interest rate rise restricts easy borrowing. At least for now, investors in these two corporations can give themselves a well-deserved pat on the back, while keeping a close eye on the early days of 2016.