Dividend-paying stocks tend to do better than their non-paying peers. Stocks that raise their dividends regularly do even better.

Viacom (NASDAQ:VIAB) has been that kind of stock for a few years now, and yet shareholders haven't enjoyed better returns. Indeed, they've suffered the opposite, as this chart shows: 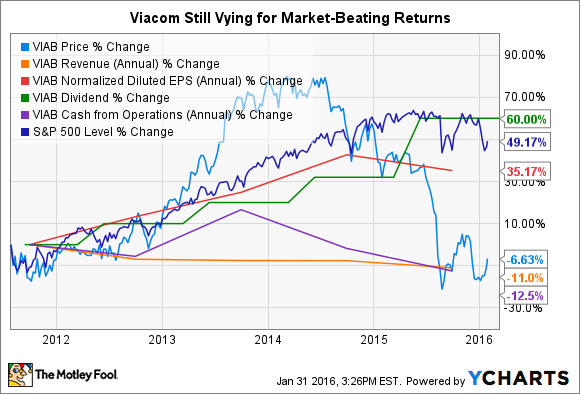 Enterprising investors will note several troubling signs in the data, including:

How bad is it really? That's tougher to say. All we know for sure is that Viacom's TV and film business isn't as sturdy as it used to be.

Second, in TV, Viacom is parent to a variety of cable properties, including Comedy Central, Nickelodeon, and layoffs-plagued MTV Networks. Bloomberg Business quoted a summer 2015 report from Nielsen that showed ratings plummeting at most of these networks. MTV, in particular, was down over 20% across all demographics and 25% in the key 18-to-34 demo that big-ticket advertisers covet.

What to expect now
Despite the troubling trends, Viacom investors will see a dividend increase in 2016, though it won't be nearly as big as some might have hoped. Historically, the studio tends to find dividend increases in January. Last month, management elected to keep the per-share payout where it was -- at $0.40. Keeping it at that level the remainder of the year would put the 2016 payout at an even $1.60 a share, a 4.6% increase over last year's $1.53 per stub. Not bad, but certainly not a traditional increase.

Call it a de facto increase instead, a predictable move for a studio that needs as much cash as it can gather to fund new film and TV franchises and reignite long-lost growth. Do you agree? Disagree? Keep the conversation going in the comments section below.

Will Viacom Raise Its Dividend in 2016? @themotleyfool #stocks $VIAB Next Article
Current