Find out why Opko Health, Pandora, and Ford get investors' rancor - and whether they deserve it.

Companies fall out of favor with investors for all sorts of reasons, but Wall Street's pessimism isn't always warranted. To see if that's the case for these three unloved companies, we asked a few of our top Motley Fool contributors for their opinion. Read on to see if they think these companies deserve Wall Street's ire, or if there's an opportunity to buy.

Only time will tell if Frost, the former chairman of Teva Pharmaceuticals, can prove industry watchers wrong, but given that he's amassed a massive 182 million-share stake in his company, he certainly appears confident.

His optimism probably stems from Opko Health's sum-is-greater-than-the-parts acquisition strategy, a strategy that has led to Opko Health acquiring various compounds and companies over the past few years, including Bio-Reference Labs, a specialty lab services company it bought last year.

The Bio-Reference labs deal catapulted Opko Health's sales by adding $832 million in fiscal '14 revenue and jump-started its path to profitability -- the company is expected to move into the black this year.

The acquisition also gave Opko Health a platform to more effectively market its 4Kscore prostate cancer test and valuable relationships with payers that it can leverage to win coverage for its medicines, including Rayaldee, a vitamin D prohormone that's under review by the FDA for chronic kidney disease patients, and hGH-CTP, a human growth hormone therapy that its developing with Pfizer that's expected to have phase 3 top-line data out before year end.

Obviously, it will be a while before investors know whether Frost's deal-making will pay off with blockbuster sales and profit growth that turns analysts bullish, but I wouldn't bet against it.

Steve Symington: With shares of Pandora Media (P) trading nearly 60% below their 52-week-high set just over three months ago, "hate" seems to be an understatement for the way Wall Street feels about the music streaming specialist of late. For perspective, look at how Pandora stock has performed relative to the S&P 500 since the beginning of last year: 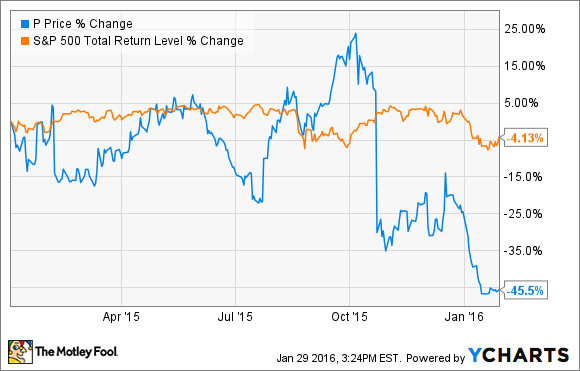 Curiously, everything seemed to be going well for Pandora Media through the first nine months of 2015. But it all unraveled when the company revealed that even as active listeners grew 2.1% year over year to 78.1 million in the third quarter, they also declined sequentially from 79.4 million in Q2, following the launch of Apple Music. In addition, Pandora caught investors off guard by announcing a $90 million settlement with several record labels regarding most of its use of pre-1972 recordings. Pandora shares fell as much as 40% that day as a result.

To Pandora's credit, three months earlier CEO Brian McAndrews warned that such a sequential decline in listeners was possible given the widely publicized launch. But at the same time, he insisted that Pandora expects the impact to be temporary and reminded investors that the decline was eerily reminiscent of Cupertino's more direct attack on Pandora's listener base with the launch of Apple Radio two years earlier. Meanwhile regarding the settlement -- and remembering Sirius XM struck a similar $210 million deal for pre-1972 recordings earlier in the year -- McAndrews defended Pandora's move as "continuing to strengthen our relationships across the music landscape by resolving a historic source of tension."

As it stands, Pandora stock attempted to stage a rebound in December -- namely, after a positive decision from the U.S. Copyright Royalty Board eased long-standing uncertainty over the rates Pandora will be required to pay artists not covered under its various direct deals with music publishers. But alas, Pandora stock resumed its downward spiral in 2016, as the broader market endured a historically painful start to the year. We can expect to receive a fresh update from Pandora when it reports fourth-quarter 2015 results on Feb. 11. But until then, Pandora remains one of the most "hated" stocks our market has to offer.

Daniel Miller: One stock that Wall Street loves to hate is certainly Ford Motor Company (F 0.46%). It's no secret that Detroit's second-largest automaker operates in a cyclical business, and it's no secret that Ford's stock price is being punished with the belief that sales in the U.S. auto industry are peaking.

That's too bad, really, because Ford is thriving at a time when SUVs and trucks are being driven off the lots in droves. Ford's operations in Europe finally turned a corner and generated a profit this year – even if partially driven by changes in pension accounting. Ford set the company record for full-year pre-tax profit and recorded the highest operating margin and operating-related cash flow since 2001. Ford also increased its global market share in 2015 and its struggling Lincoln lineup recorded its best year of sales since 2008. The good news is that Ford expects its results in 2016 to be roughly equal to or higher than last year, which means investors can expect another year of record profits.

Ford is also a much more forward-looking automaker than it was in previous decades. That means it's committed to pouring $4.5 billion of capital into researching and developing 13 new electrified vehicles by 2020. It's also testing and developing a long list of smart mobility and alternate transportation services to generate new revenue streams from an increasingly urbanized and car-sharing world. Ford doesn't have much left to prove, but Wall Street will continue to hate the stock until automotive sales peak, or begin to decline, and the folks at the Blue Oval prove the company can continue to generate strong during a cyclical downturn.

Why Searching for Cheap Stocks Is the Wrong Investing Strategy
363%