Changes to the company's growth and dividend plans for 2016 and beyond, and some color about how Spectra plans on getting DCP midstream back on its feet should be at the top of investors' checklists this quarter.

Despite so many other energy companies experiencing huge declines in share prices over the past year, shares of Spectra Energy (SE) have been rather resilient. A large part of that has to do with the company's business model, and it helps that it has avoided the credit trouble that has plagued so many other midstream and pipeline companies. So, when the company reports earnings on February 3, investors shouldn't see too much change in the company's results.

Instead of fretting about the numbers, Spectra Eenrgy investors should be watching for any signals about the future for the company. Here are three things in particular worth looking for when the company reports earnings.

Changes to expansion plans?
To say that Spectra Energy has ambitious expansion plans might be an understatement. With more than $20 billion in projects under development, the company has one of the largest growth portfolios in the midstream space. 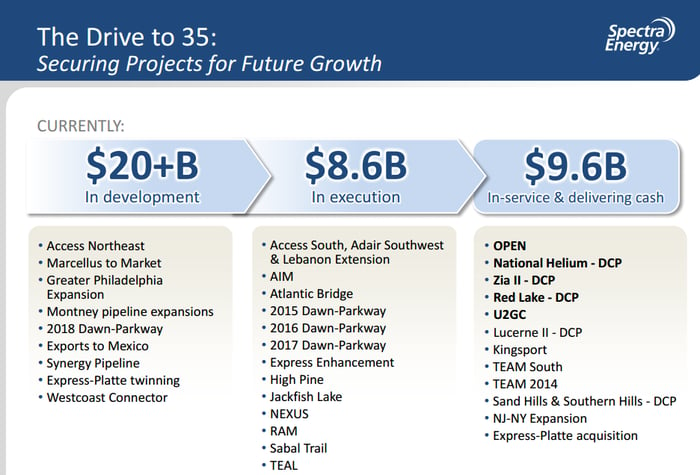 Having that many irons in the fire looked great when oil & gas activity across the U.S. and Canada was booming, and infrastructure was desperately trying to play catch-up. Today, though, we're seeing production waning across North America with few signs that it's going to pick back up in 2016.

What could also make executing this growth plan tricky is that access to capital markets is becoming more difficult for many midstream companies. Lower share prices -- and the higher dividend yields that go with them -- make issuing equity a less attractive option for new capital. Likewise, debt issuers will likely be more skeptical of handing out debt indiscriminately as more and more companies look strained.

These two things may not be as big of issues for Spectra. The company maintains a strong credit rating, and a majority of the projects it has planned in 2016 and 2017 are known as demand pull projects. These are projects designed for end-use customers who want to consume the commodity. These kind of projects will be less affected by waning production because there are subscribed customers who want access to the commodity.

While the chances of seeing a major change to its growth plan are low, it's possible we could see a couple of tweaks here and there that investors should keep an eye on.

A more conservative dividend plan?
Along with that impressive project growth plan is the company's dividend growth. Spectra's management is planning for 2017 dividends to be 28% higher than they were in 2014. To achieve those goals, though, its cash flow will have to go exactly according to plan, as the company projects its distribution coverage ratio will fall to 1.0 times in 2017. 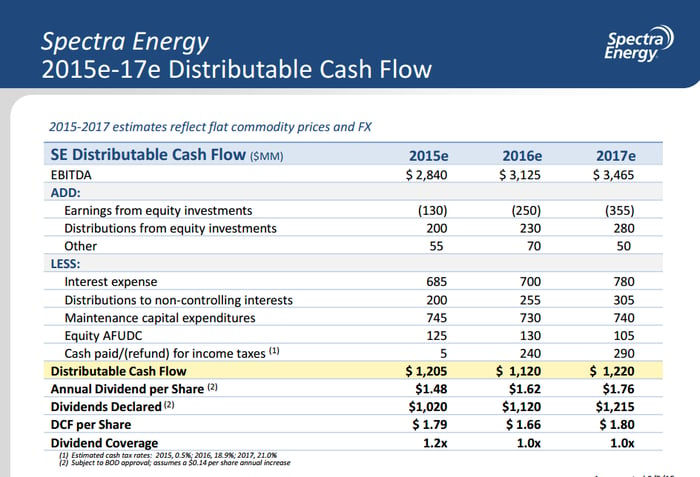 As the downturn in energy has hit harder and harder over these past several quarters, one thing that's becoming highly valued in the midstream space is to be able to retain some excess cash flow that can be used on growth and reinvestment. It allows the company to be less reliant on the capital markets for growth.

It should also be noted that these projections, made in February of 2015, made the assumption of flat commodity prices and no changes in foreign exchange. Since that time, though, oil and gas prices have declined significantly, and the Canadian dollar has also weakened significantly.

With such a tight budget plan for 2016 and 2017, it may be possible that Spectra trims its dividend growth plans for this year and next.

Unlike many of Spectra's assets, which are those demand pull projects to end-use customers, DCP Midstream is much closer to the supply side, owning large natural gas gathering and processing assets across the U.S.; making it much more susceptible to the swings in oil and gas prices. Just a $0.10 change in a gallon of natural gas liquids equates to a $3.5 million change in adjusted EBITDA for DCP Midstream Partners.

Back in September, both Spectra Energy and its other owner, Phillips 66 (PSX -1.03%), combined forces to prop up DCP Midstream with a $1.5 billion injection of cash and a transfer of two pipelines that will generate higher cash flows.

For now, Spectra has no expectations that DCP midstream will be a positive cash generator for it. Spectra's current budget assumes that DCP will make no distributions to Spectra through 2017. However, we can't expect Spectra to be benevolent forever, so investors should look for some plans of bringing DCP Midstream Partners back into the fold to be a productive cash generator for the company.

What a Fool believes
In terms of the quarterly results, chances are there won't be a whole lot of surprises when Spectra Energy reports earnings -- 95% of its revenue is generated from fixed fees. So, aside from some potential foreign currency headwinds, it's not unrealistic to assume Spectra's results will throw us any curve balls.

Looking further down the road, though, it's worth checking in to see if Spectra has made any changes to its growth and dividend plans as well as its plan to keep the DCP Midstream turnaround on track.

Tyler Crowe has no position in any stocks mentioned. You can follow him at Fool.com or on Twitter, @TylerCroweFool.