Please ensure Javascript is enabled for purposes of website accessibility
Log In Help Join The Motley Fool
Free Article Join Over 1 Million Premium Members And Get More In-Depth Stock Guidance and Research
By Leo Sun – Feb 4, 2016 at 9:51AM

Will this RF chipmaker bounce back this year with new growth opportunities?

Shares of RF chipmaker Skyworks Solutions (SWKS -4.47%) have fallen 20% over the past 12 months due to ongoing concerns about its dependence on Apple (AAPL -3.00%) and rising competition in the RF market.

Analysts estimate that over a third of Skyworks' top line comes from Apple's orders for its RF modules. This means that if sales of Apple's iPhone decline annually for the first time this year, Skyworks' sales growth could also suffer. To make matters worse, Qualcomm's (QCOM -1.62%) new RF joint venture with TDK indicates that RF modules might be integrated into cheaper reference designs for low to mid-range smartphone makers.

I previously discussed how those headwinds could cause Skyworks stock to continue falling this year. Today, I'll highlight three bullish factors the bears might have overlooked.

1. The valuation
Skyworks trades at 13.5 times earnings, which is significantly lower than the industry average P/E of 24 for the IC industry. Its RF rivals Qorvo (QRVO -2.91%) and Avago Technologies (AVGO -1.36%) respectively trade at 49 and 27.5 earnings.

Many of Skyworks' new customers connect their devices to the Internet of Things (IoT), which connects cars, wearables, smart appliances, and other objects to the cloud. Skyworks estimates that between 2014 and 2019, the connected device market will grow at a compound annual growth rate of 35%. Based on the following chart from Skyworks' investor presentation, the importance of smartphones and tablets will fade as other IoT markets take over: 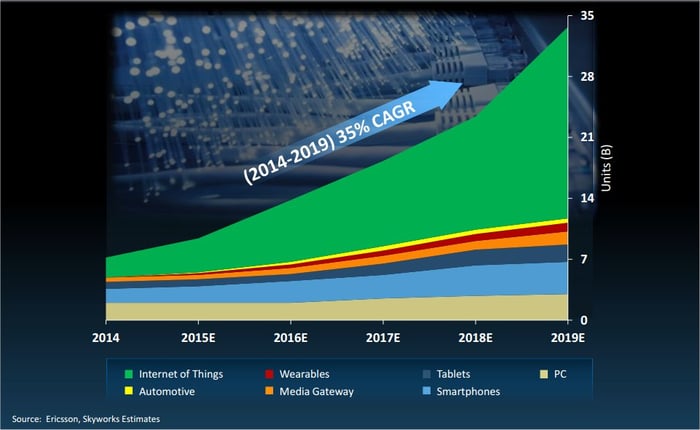 3. The 4G upgrade will boost demand for RF chips
The upgrade of 2G and 3G connections to 4G LTE ones over the next few years will also increase demand for RF modules worldwide. That's because 4G devices require more RF modules that their slower counterparts.

Ericsson estimates that the number of monthly LTE subscriptions worldwide will rise from 500 million in 2014 to 3.7 billion by 2020. During that period, total smartphone subscriptions are expected to rise from 2.6 billion to 6.1 billion.

These figures indicate that demand for various RF modules will outpace the growth of the overall smartphone market. It also means that there might be enough room for Skyworks, Qorvo, Avago, and Qualcomm to all develop RF front-end modules and filters without stepping on each others' toes. There's also a strong chance that Skyworks will grow inorganically, as Avago did, to diversify its product portfolio, grow its market share, and reduce production costs through economies of scale.

However, investors with a long-term view of Skyworks should focus on its cheap valuation, growth potential in the IoT market, and tailwinds from the 4G market instead. Therefore, 2016 won't be Skyworks' best year, but I think it will be a decent year with more upside than downside potential.

Leo Sun owns shares of Qualcomm. The Motley Fool owns shares of and recommends Apple, Qualcomm, and Skyworks Solutions. Try any of our Foolish newsletter services free for 30 days. We Fools may not all hold the same opinions, but we all believe that considering a diverse range of insights makes us better investors. The Motley Fool has a disclosure policy.