AT&T recently announced it will follow Verizon to begin testing 5G, but what does this mean for its ongoing rivalry with T-Mobile, Sprint, and Verizon?

During one of the most challenging times to own stocks since 2008, especially for technology stocks, the largest U.S. telecom company by market cap has eviscerated the market thus far in 2016. 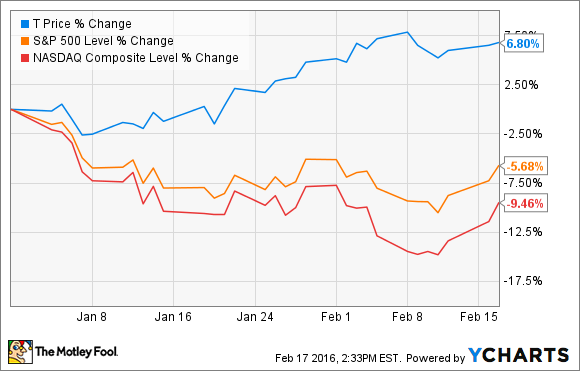 What's more, AT&T shows no signs of letting up. Recently, the Dallas-based telecom titan announced it plans to begin the first phases of its rollout of its ultra-fast 5G cellular network this year. But will this effort help the company set itself apart from the likes of Verizon Communications (VZ -1.03%), Sprint (S), and T-Mobile (TMUS -2.01%)? Let's take a look.

AT&T goes 5G
According to The Wall Street Journal, AT&T is preparing to begin tests for its 5G network at some point in 2015. The article says AT&T has applied for an "experimental license" with the Federal Communications Commission, the telecom industry's primary regulator. The license should allow the company to conduct experiments using an early version of its forthcoming 5G technology, which follows a similar announcement from Verizon last fall.

AT&T will begin working with both Ericsson and Intel in and around Austin, Texas, for the first phase of its 5G experiments. Crucially, though, AT&T's first 5G experiments won't involve wireless cellular technologies with which the standards are typically associated. Rather, as part of its DirecTV merger agreement with the FCC, AT&T will instead test so-called "wireless broadband" services to potentially expand ultra-fast Internet service to rural communities via wireless 5G signals. These real-world experiments near Austin will help demonstrate how 5G equipment reacts to real-life impediments such as heat, rain, and wind, which can provide valuable insight into how telecom carriers such as AT&T can optimally configure their eventual national wireless 5G networks. Importantly, though, this news doesn't mean consumers should expect 5G cellular access for their smartphones and tablets anytime soon.

Playing the long game
5G technology has existed for years now, but its widespread deployment for cellular devices shouldn't be expected until later this decade, for a few reasons.

For starters, determining the standards and protocols that will set the stage for global 5G deployment requires countries, carriers, and wireless equipment makers to forge broad consensuses that can take years to fully determine. In the U.S., the FCC proposed its initial 5G standards proposal in October, but the final official standards aren't anticipated until 2018. Installing entirely new network protocols requires billions in capital expenditures from carriers, and as such, carries such as AT&T, Verizon, T-Mobile, and Sprint will all probably favor a go-slow approach in investing in the nationwide rollouts of the standard.

When they eventually reach full deployment, 5G wireless should provide a sizable performance boost over current 4G LTE. AT&T has said it believes 5G speeds should offer at least a tenfold performance over today's 4G, and speed improvements could reach as great as a hundredfold in the future. Such speed improvements are believed to be fundamental to support future growth drivers of the tech industry such as the Internet of Things, telemedicine, ultra-high-definition video streaming, self-driving automobiles, and more.

So though the performance of this new standard appears worth the wait, this represents just the first chapter in what's likely to be a continued struggle for telecom supremacy among AT&T, Verizon, T-Mobile, and Sprint.

Andrew Tonner has no position in any stocks mentioned. The Motley Fool recommends Intel and Verizon Communications. Try any of our Foolish newsletter services free for 30 days. We Fools may not all hold the same opinions, but we all believe that considering a diverse range of insights makes us better investors. The Motley Fool has a disclosure policy.