Please ensure Javascript is enabled for purposes of website accessibility
Log In Help Join The Motley Fool
Free Article Join Over 1 Million Premium Members And Get More In-Depth Stock Guidance and Research
By Justin Loiseau - Mar 2, 2016 at 10:15AM

SolarCity Corporation may not be the best solar stock.

The sun is not shining on SolarCity Corporation (NASDAQ: SCTY) investors. Down more than 60% over the past year, the market seems to have lost faith in this once high-flying stock. But fear not -- there are other solar stock portfolio picks. Here are three stocks that are better buys than SolarCity Corporation. 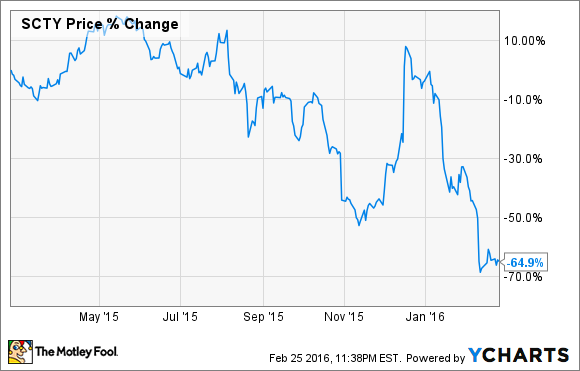 1. First Solar
In August 2013, SolarCity Corporation CEO Lyndon Rive announced that his company had set a goal of reaching one million customers by July 4, 2018. While that goal may yet be achieved, SolarCity recently hit a rooftop roadblock when Nevada regulators revised a key solar energy support policy -- effectively ending residential solar's expansion in the second sunniest state in America.

Nevada's regulatory revision doesn't destroy SolarCity's future, but it served as a wake-up call for many solar investors. Residential solar is risky, and many have turned to utility-scale companies such as First Solar (NASDAQ: FSLR), instead. First Solar is one of the largest PV solar panel manufacturers in the world and deals almost exclusively in big projects. The company designs, constructs, and then sells off these projects -- often alongside a 20-year operating and maintenance contract.

While First Solar's business model may not have the customer base or expected growth rates that SolarCity Corporation boasts, it's simply a more conservative company with a steadier stock. It enjoys nearly 10 times the sales of SolarCity and is one of the only solar companies to pull actual profit. Its 16% profit margin and $500 million in operating cash flow (ttm) point to a company that is on a sustainable growth track -- and that's something every solar investor should admire.

2. SunPower
With so much talk of regulations, acquisitions, and financial metrics, it's easy to forget that the solar energy race still revolves around technological innovation. And when it comes to technology, solar producer SunPower (NASDAQ: SPWR) boasts the most efficient panel on the market. While SolarCity Corporation and others are dealing with end-of-line supply chain issues such as increased competition and uncertain demand, SunPower is quietly supplying the panels that power farms and rooftops around the world. 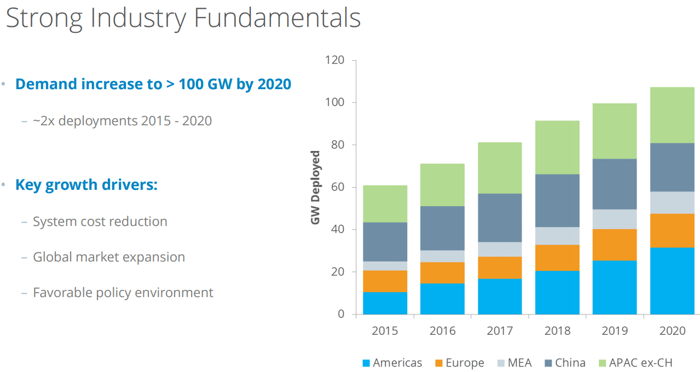 SunPower's performance hasn't gone unnoticed, but Wall Street continues to underestimate it. For the last four quarters reported, the company has exceeded analyst expectations every time. But unlike First Solar, SunPower has significant growth plans -- to the tune of tripling production over the next three years. While that means more potential upside for a company trading at a reasonable 11.5 times forward earnings, SunPower's plans put it solidly in between SolarCity and First Solar on the risk spectrum.

For solar stock investors, yieldcos are essentially the only way to enjoy a dividend -- regular solar corporations are simply too focused on growth to afford distributions. Currently, 8point3 is flush with cash, allowing it to offer investors a sizable 5.5% yield. In its most recent Q4 2015 earnings announcement, it also noted plans to increase its distribution by 3.5% for Q1 2016 and 12% to 15% for 2016, overall.

Sell SolarCity?
As a SolarCity shareholder, myself, I'm not ready to sell shares just yet. My long-term view still leaves me with strong expectations for the next decade -- but in the meantime, considering stocks like First Solar, SunPower, and 8point3 Energy Partners may be a smart move to diversify and add more winners to your solar stock portfolio.